I have a 98 Mazda 626 GF 2L ATX which I don't drive allot, and which has had a few unusual stalls and almost stalls, one of which I had trouble restarting after.

In the past say two months, I had incidents where an alert light on the dash would come on ( a picture of a car with a big key superimposed over it ), the engine would almost stall ( as if electric power was cut ), it would recover and the light would go off. This would all happen in around a second.

Then today, the car died while I was idling. It was similar to the previous "almost stalls" in that there was no sputtering or shaking; it was as if someone had simply unplugged the battery, a very gentle, quite stall. However, that "car & key" picture did not come on. At first I was unable to restart the car. I tried a few times over the course of a few minutes with no success. So I waited maybe fifteen minutes, came back and it started right up. I drove home, turned it off, started it up again and was sitting letting it idle for a few minutes when the same thing happened again. However this time it started right up.

I hooked up my laptop with the ForScan software and pulled a P1500 DTC:

I cleared the code, restarted the car a few times, did some slow drives around the parking lot to collect some test data, and so far it didn't stall again and the code didn't come back. I asked a separate question regarding the test data I gathered. I also ran the KOEO and KOER self tests which both passed with no errors.

Some things which might ( or might not ) be related are that I recently had to replace a bad Turbine Speed Sensor, and a verifiably bad alternator, and my remote entry key stopped working. I also had to replace the Lambda sensor a while back. I'm a bit worried maybe that bad alternator was slowly frying my electrical components. There is also an aftermarket keypad immobilizer which was disabled because it was causing problems, however the components like the relay for disabling the fuel pump, are still in place. I'm also having a problem with rough idle under load, when I turn on the A/C, electrical loads, or hold down the brake with the car in drive. That's everything I can think of at the moment.

Anyways, I'm at a bit of a loss as how to proceed. I recently went on a fairly long drive ( three hours round trip ) with no incidents, but now I'm a bit worried about driving the car around.

What should I do now?

So I tried to follow the procedure in the video that @Zaid posted. I hooked up my computer, let the car idle, and went around shaking and wiggling the wiring harness and the wiring of every individual sensor I thought might be relevant, without any visible results. I also went under the drivers side dash and started wiggling wires, and went to the passenger side and wiggled around the connector to the ECU. I probably let it idle 30 minutes, and then I drove it around the neighborhood for about ten minutes on very bumpy roads, but couldn't reproduce the problem.

I want to take the family on a 2 1/2 hour trip tomorrow, but am a little nervous and not sure how to proceed at this point.

So my long standing suspicions regarding the car's security system being the source of some strange stalling problems seems to have been confirmed: 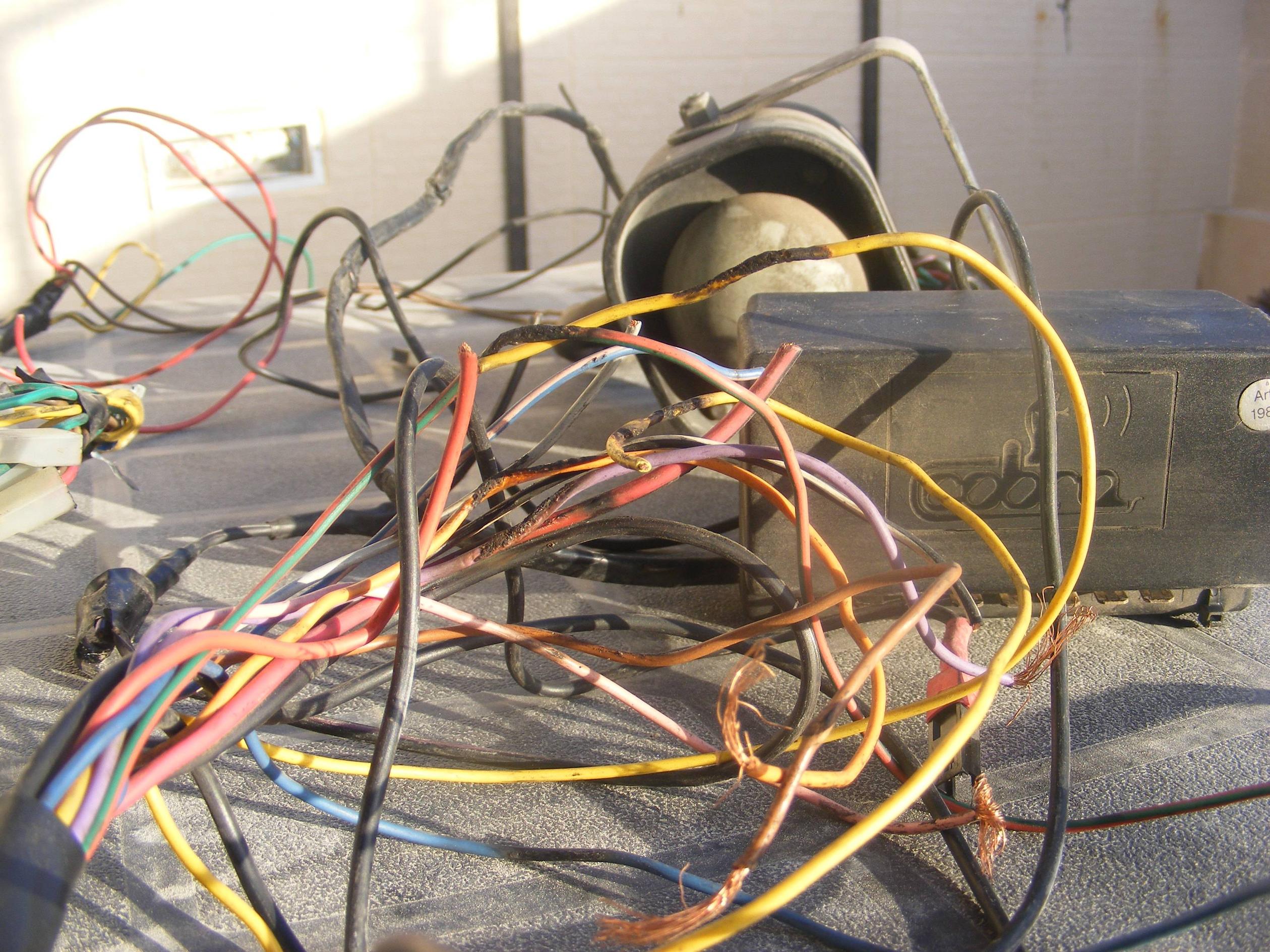 The Cobra alarm system which was installed in the car had multiple shorted out, charred wires ( you can see six in the picture ) which were making intermittent contact with each other. Apparently, over the course of the past 18 years, the wires had been rubbing against something until the insulation on them wore out and they started shorting together and smoldering. This would sometimes disable the ECU, and sometimes the fuel pump, and sometimes the injectors, etc...

The auto electrician I brought the car to said he couldn't understand how I even made it to the shop without the car stalling out or catching on fire.

I told him that the car did stall on the way over and I used the patented jafromobile method of reaching under the dash, grabbing a bunch of wires and shaking them to get the car to start again.

Just in case it might help someone, I had my computer hooked up to the ECU and logging data on the drive over to the mechanic. When the car stalled, I noticed two things. One was that although there was power to the whole car and I could turn over the engine, I was unable to connect to the ECU:

After wiggling the wires under the dash a few times and generally messing around for about 25 mintues:

The other thing I noticed while I was still unable to start the car was that when I turned the key to the ACC or ON position, the battery indicator would not light up even though I had power to pretty much everything in the car. Once I wiggled wires enough and I saw the battery light was coming on I was able to connect to the ECU and start the car. I'm guessing that this is because alternator voltage regulation is done by the ECU on this car and it's the ECU which is responsible for turning on the check battery light.

Anyways, that's it in the mean time everything seems to be OK.

Not the answer you're looking for? Browse other questions tagged intermittent-problems stall or ask your own question.

6
How does a cobra alarm system disable starting
14
How to determine exactly what's wrong with my alternator?
6
Cranks, but No Spark and Can't Connect to the ECU
5
Can I use a FN4A-EL Turbine Speed Sensor on a GF4A-EL?
4
VSS accuracy at low speeds

6
Could a faulty fuel level sensor cause a vehicle to stall?
0
Car stalls after running
5
What can cause intermittant stalling for a Ford Windstar van?
2
Jeep Wrangler shudders/stalls when put in gear after cold start
1
'98 Subaru Legacy Outback -- does this sound like a broken MAF?
1
Car stalls and bogs down on cold start while accelerating
1
HHR - CEL giving codes P0171 and P0326