Running with straight water as coolant in the summer. Is it fine?

I grew up flushing the coolant twice yearly. In the Spring, you drain the antifreeze and fill with straight water for the summer. In the Fall, you drain the water and put in a 50/50 antifreeze/water mixture.

I have heard (from an auto store clerk) that running just water will cause overheating. The clerk also said that antifreeze prevents corrosion and sediment build up and cleans the coolant system.

I have heard (from an auto store clerk) that running just water will cause overheating.

Well, that's not true. Water isn't the cause of overheating. Your coolant mixture (of whatever proportion) and radiator work together to get rid of the heat. If it's not hot, you won't overheat. However, when it is hot, the coolant can only absorb heat up to its boiling point.

Here's a super high level summary of a cooling system:

Liquid cooling requires the best contact possible between the metal and the liquid for most efficient heat transfer. Problems occur as the coolant approaches it's boiling point: steam bubbles start to form, especially at hot metal surfaces. Each one of those bubbles is a less efficient point of heat transfer. That means less heat leaving the engine, meaning a hotter engine, more spots where bubbles will form, repeating until steam starts coming out of the hood.

The clerk also said that antifreeze prevents corrosion and sediment build up and cleans the coolant system.

That depends on the product. Quite a lot of the coolants on today's market will inhibit corrosion and minimize sediments. Some, like Water Wetter, will actually increase the cooling system's ability to carry away heat.

Just remember that lack of evidence doesn't necessarily indicate absence of the phenomenon.

As always, it's your car. You need to make the call. I can't be bothered to flush out my coolant just to change it from green to clear. When it's dirty, I flush it, not before.

NOTE: I know that a pressurized radiator system changes the physics from this simple "boiling point and no higher" explanation. This is a reasonable first-order approximation for the purposes of discussion.

EDIT: @Paulster2 was kind enough to post a picture of what happens to a water pump when it is run with straight water without the corrosion prevention of coolant + water: 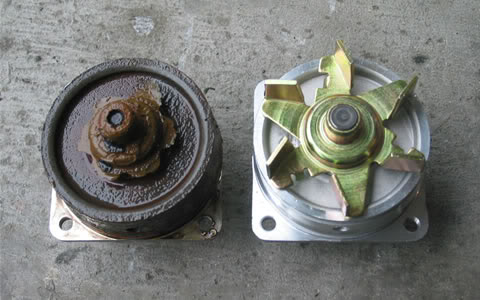 I submit that the one on the left can no longer be considered a pump.

The main ingredient in automotive antifreeze, Ethylene glycol, has a higher boiling point when mixed with water than water alone. Wherever you live, I bet it's not Arizona or Texas. Steam voids suck, you don't want any in your cooling system. Antifreeze also contains corrosion inhibitors. I bet you don't have hard water, either.

If you were to do a Google search for water vs. antifreeze, winter or summer, you will find no support for running water for anything other than pressure tests. Absolutely do not use regular water for an extended period. It will cause more problems. Antifreeze helps keep corrosion away and does aid in cooling in warm weather, better than straight water.

Water is corrosive. You will shorten your engine's life if you don't add antifreeze. Antifreeze, on top of everything else it does, also acts as a rust inhibitor. Yes, you can run straight water, but your coolant boiling point will be lower AND you'll corrode the inside of your engine and destroy your water pump.

When it comes to coolant. It is not recommended to run with either 100% water or ethylene glycol. Manufacturers (Ford in this case) recommend the that the coolant concentration not go below 40% or exceed 60%. Doing so will do damage parts and they won't function properly.

Compare to properties of the components separately.

I do not buy a bit about overheating except, mayhaps, severe service or a lot of stop and go traffic (meself, if I have to top off with water in the summer, I do so), but I would worry about corrosion and sediment. Distilled water would take care of the latter, but for the former I would use some sort of protective product, even if for the peace of mind alone. Either summer coolant or some anti-corrosive additive.

Water ain't water. Depending on where you live water contains dissolved salts that deposit scale and reduce life of components such as sacrificial items like thermostat housings. Having said that, here in western Australia temperature often exceed 120F in the shade. I've always used rainwater collected in a kids paddle pool, not via a metal roof or down pipe. Another old bushys trick is to soak 200 cheap teabags in hot water. Cool, then strain through a very fine sieve and add to radiator. Look inside an old enamel or alloy teapot. Never corrode do they! Just replaced my radiator after 38 years. Says it all doesn't it.

Very simple answer despite what everyone else is saying. If you live in a hot state say like Texas or Arizona, I would use no less or no more than 70% water 30% coolant in the summer and 50/50 in the winter! If it's a colder state like Colorado or Montana I would reverse it for the winter as in 70% coolant and 30% water and 50/50 in the summer! It's your choice but personally I would just do 50/50 year around unless your state see's 110 summers and -5 winters, if it does then follow the above example!

0
Not using antifreeze in warm climates
2
Just bought a car, engine running hot, found pure water for coolant
0
Does the coolant shorten the life of radiator?
0
What problems can extended use of water as a coolant during the summer months caused by an internal leak
0
can running just water ruin my water pump
16
Leaving car in Lubbock, Texas for 1 month
8
What can cause a vehicle to run hot, but not overheat?
6
Golf mk3 TDI has pressure in the cooling system
0
Low coolant in freezing weather
2
How often to put water in coolant
See more linked questions

17
2000 VW Golf heater won't blow hot air
5
Getting the best results sealing head gasket leak with Blue Devil
2
Clear water in coolant reservoir
4
Flushing coolant after driving only with water in
5
Flushing built up Rust and Mineral Deposits in Cooling System
11
50/50 Coolant Dilution after distilled water flush?
4
Safe to store bike with no coolant?
1
Number of times you should refill and drain your cooling system to get pure water?