I bought my car used, and unfortunately I have no idea when the timing belt was last changed. I decided to open the timing belt cover today to take a look. The top of the belt seemed a bit shiny but I'm not really sure what's considered normal or not.

Here are photos I took of the belt, any opinions would be very appreciated. 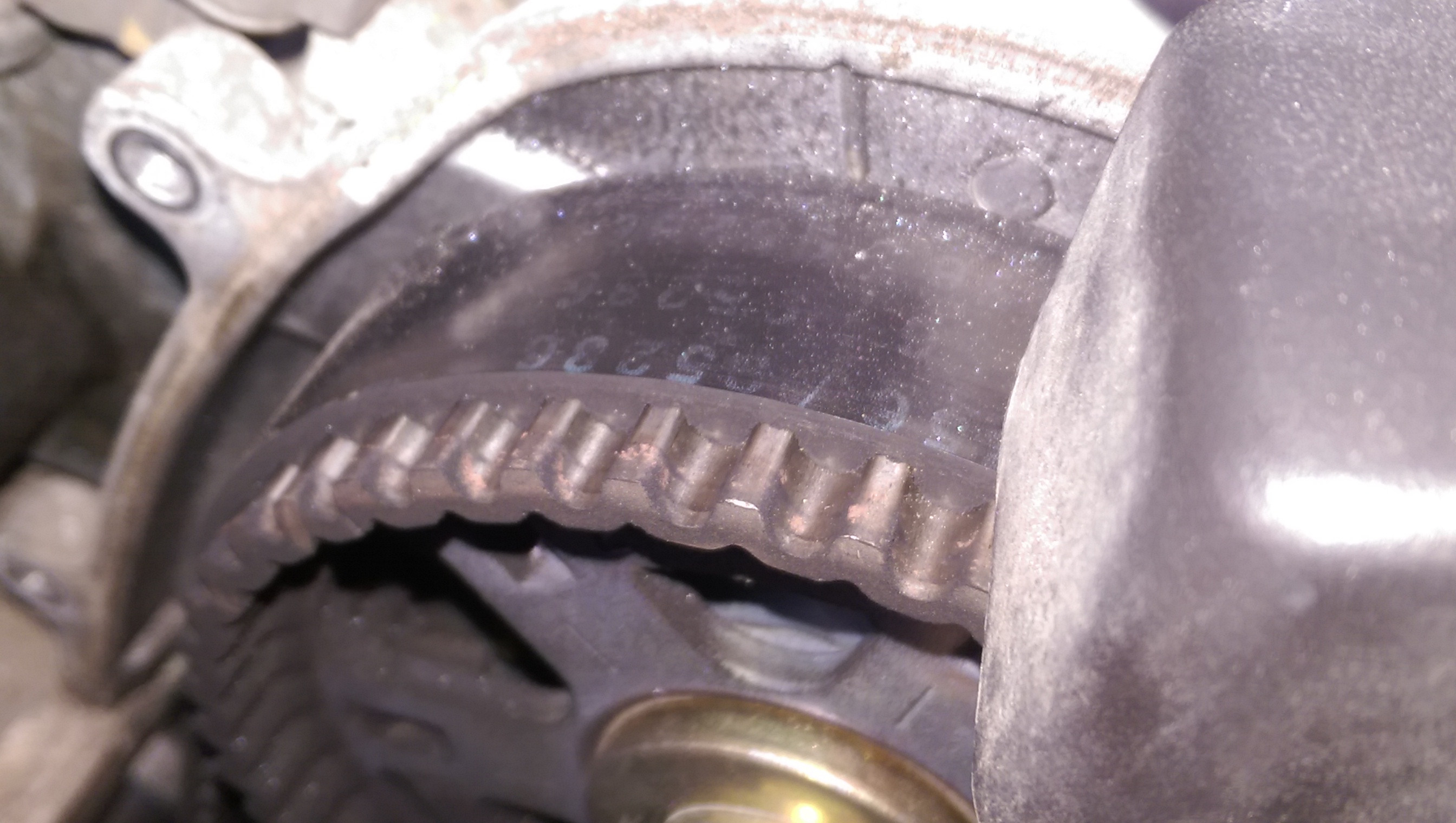 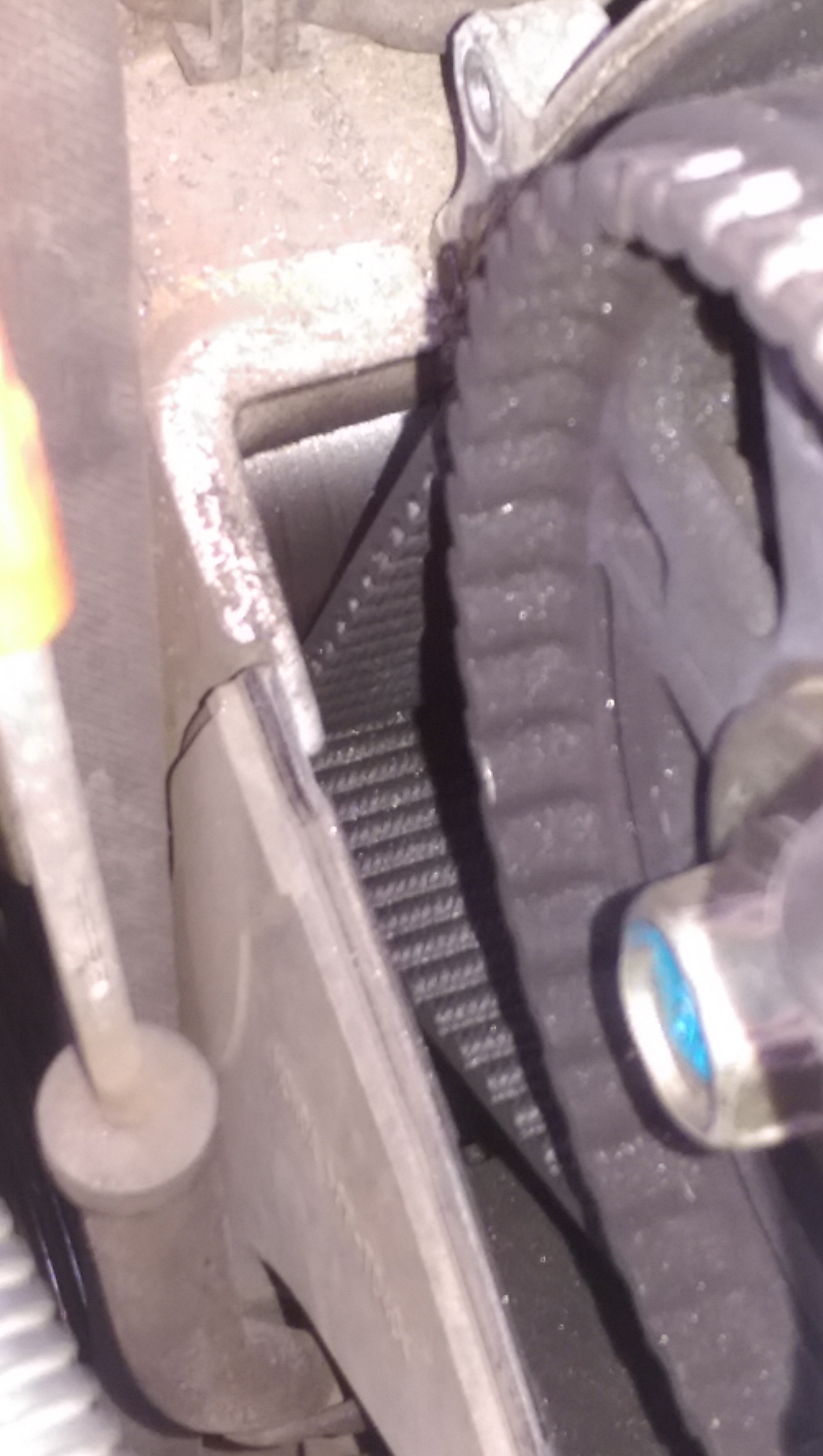 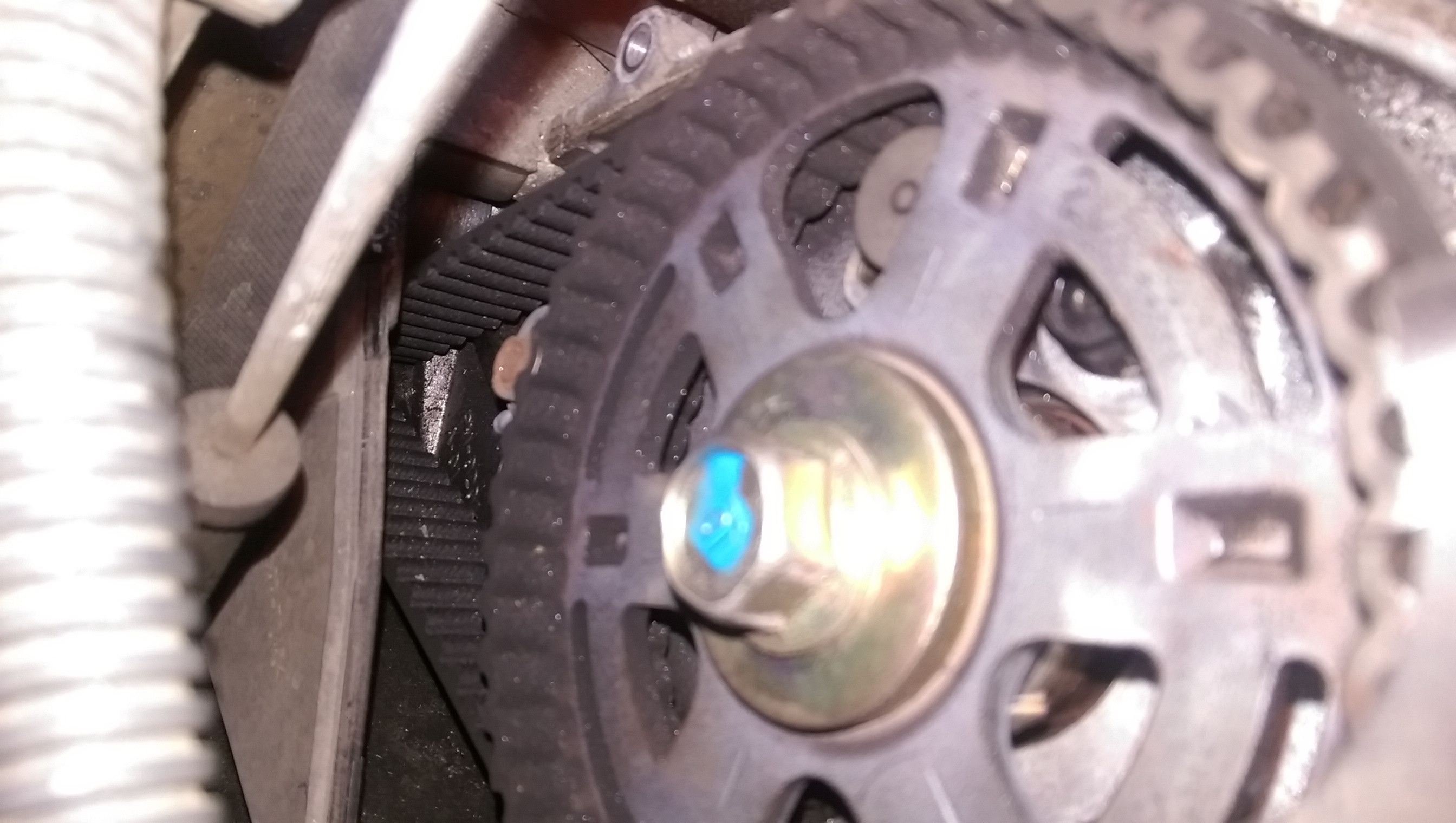 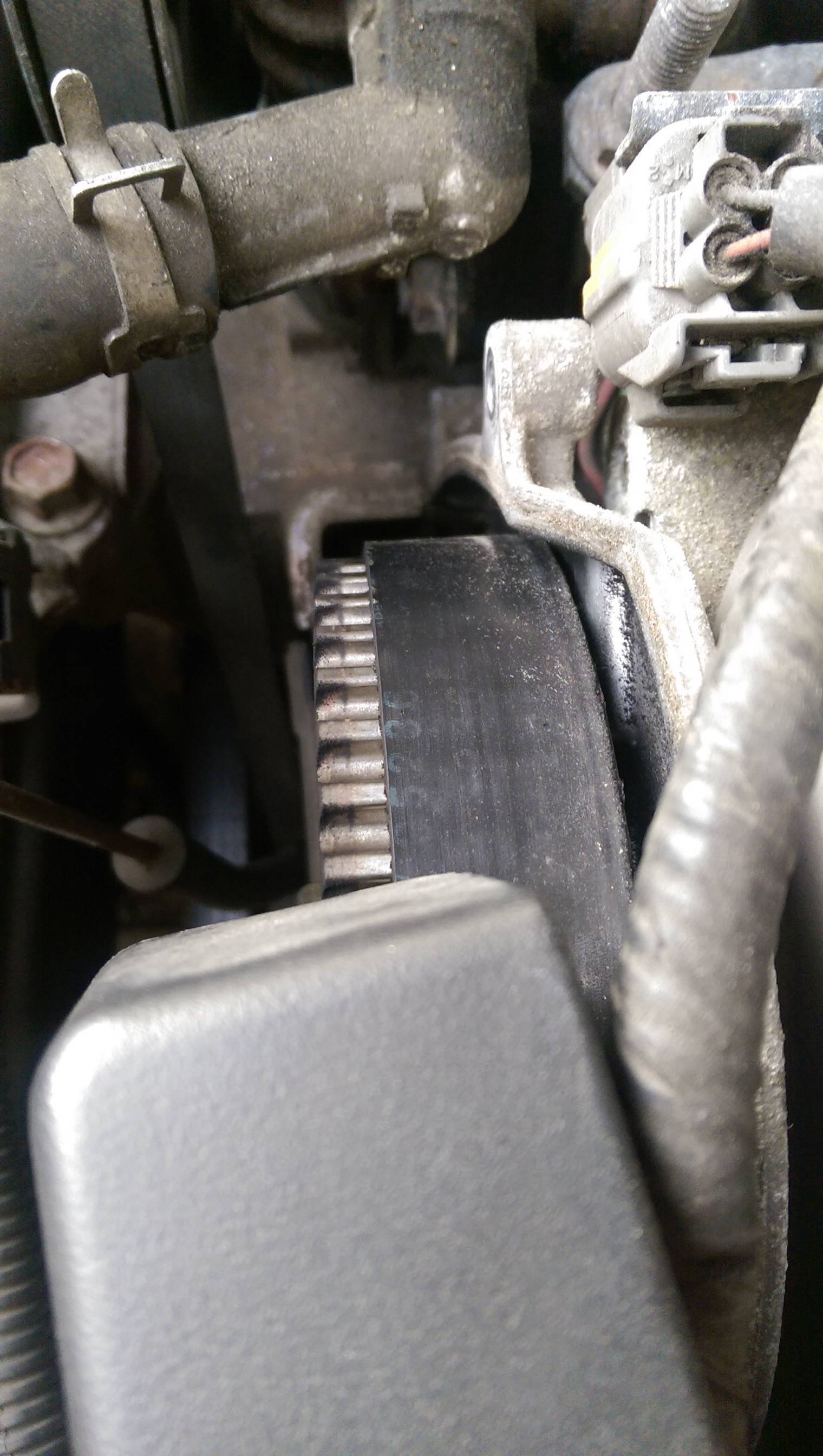 Unfortunately there is no magic eight ball which can tell you how many miles are on a timing belt. This is my own opinion, but I'm sure it's shared by most:

If you don't know the mileage of a timing belt on a car with an interference motor, change it. You can never go wrong.

The one you are showing in the picture looks like it's been around the block once or twice. I'd sure as heck change it.

The belt looks okay, but @dlu is totally correct I'm not liking the track. The first photo it almost looks like it's rubbing on the inside of the cam flange.

In any case, you can count the cracks on the belt teeth. If you bend the belt away from the teeth and see more that 3-5 cracks over a 1" span, the belt needs to be replaced.

Get a Conti or Gates kit that includes the waterpump as well. Money well spent. You can save money by ordering online... I don't think this is emergency crisis mode, but as other posters mentioned the only timing belt you really know is the one you're installing right now.

This job is a really rewarding one for a DIY and not too complicated, as long as you take your time and mark everything carefully. I use those paint pens in bright flourescent colors along with a pair of 2.50x drugstore cheaters for the best results. (I was born when cams were driven by a chain, or something called a "Jackson Drive"... I'm old.)

As others mentioned: Change it, the belt looks suspicious (especially the position and the side towards the engine) and it is much cheaper than a new engine.

Just for the position of belt on the sprocket:

For certain types of spring tensioners it can happen, during installing, that the spring will get stuck between tensioner and engine block, thereby causing a miss-alignment of the tensioner and consequently forcing the belt out of track. For clarification: 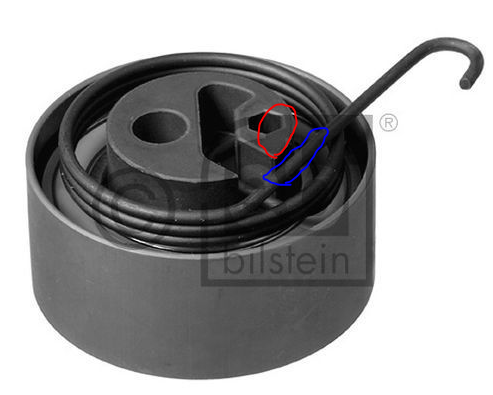 Echoing the advice you've already received, change it as soon as you can.

Neither of those seem like good signs to me.

Change it! That belt has wandered from center as is visible by the wear pattern on the sprocket and it looks like the back edge against the head is showing signs of rubbing. This is most likely due to a worn water pump and/or idler/tensioner. Change them all too. You can get away with breakage on a non-zero clearance engine like most Toyota/Subaru's which will just stop running, but things like Honda's and Ford's it spells catastrophic death for the engine. There is almost never any warning that they are ready to snap.. Don't risk it. -Rich

You could try cost-benefit analysis.

Work out the cost of replacing the belt now.

Work out the cost of replacing the engine (or the car) after the belt snaps and the pistons hit the valves. Also include the wear and tear on your nerves if that happens at speed, and the non-negligible chance of it causing an accident. It's most likely to snap while you are accelerating hard, such as while overtaking (cue nightmares). Then there's the cost of having the immobile vehicle recovered to a garage.

Guesstimate the probablity of the latter event if you delay the cost of the former for too long. It's a fair assumption that if the belt had been replaced recently the vendor(s) would have used proof to support a higher price for the car. So most probably it's approaching or outside its service life.

For anything except a very old car that is used for fairly few miles per annum and that you expect has only another year or two left in it, you'll conclude that in the absence of a service history, it's best to replace the timing belt now. Safety considerations may convince you even for a temporary car of little more than scrap value.

BTW I think there may be some low-compression engines where the pistons can't hit the valves, in which case it's far less traumatic when the belt snaps. So if money is very tight and if you can establish that your engine is definitely in this category, the balance may shift a bit.

I would assume it hasn't been changed. I have never had a belt changed by a garage without a sticker somewhere on the car stating the mileage and the date (some manufacturers recommend changing after X years even if the mileage is low).

Replace it as soon as you can. A couple cars ago I was in a situation like yours. I opted not to replace it, and the timing belt let go. Completely trashed the engine and totaled the car.

Trust me, shelling out for preventative-maintenance is much, much better than fixing something that's gone wrong. You should try to catch problems as early as you can.

I'm late to answer, but I'd like to present an alternative opinion to those opinions that I see already here.

Though their may be risk of damaging the motor if the belt fails (interference engine), this could turn out to be a rather expensive belt change. If the engine is not an interference engine or has less than ~120K KM on it, then I'd not change the belt.

The reason that I warn that this job looks like it could get expensive is because the belt looks fine, but the installation was poor. That belt should be in the middle of the gear, not the inside edge. Therefore it has been changed, but by an inexperienced mechanic. Other installation issues, such as overtighting of bolts or damage to the front engine mount or water pump, might turn this job into a quagmire. The belt replacement likely happened at 75K-100K, so I'd change it at ~150K. But not before.

Not the answer you're looking for? Browse other questions tagged timing-belt or ask your own question.