The turbo output in our 2002 VW Jetta TDI has dropped way off. Pulling the turbo out seems like a serious piece of work, so I'd like to be pretty confident that it has failed before I pull it. So I'm wondering how to test that. I think I have two specific questions:

Assuming that the controls are good, is there anything else that I could/should check before pulling the turbo?

Is there any way that the vane actuator could be moving and yet not actually moving the vanes, or is it a positive linkage?

There is a positive linkage, but it doesn't mean it isn't working right. However, if the linkage is moving freely, the vanes inside the turbo exhaust housing should be moving. The vacuum can (actuator) is where the problems lie most of the time. You can get an excess of soot buildup within the turbo which can cause the vanes not to move correctly, but again, the actuator rod would not be moving either. Here is an image with several of the major parts annotated: 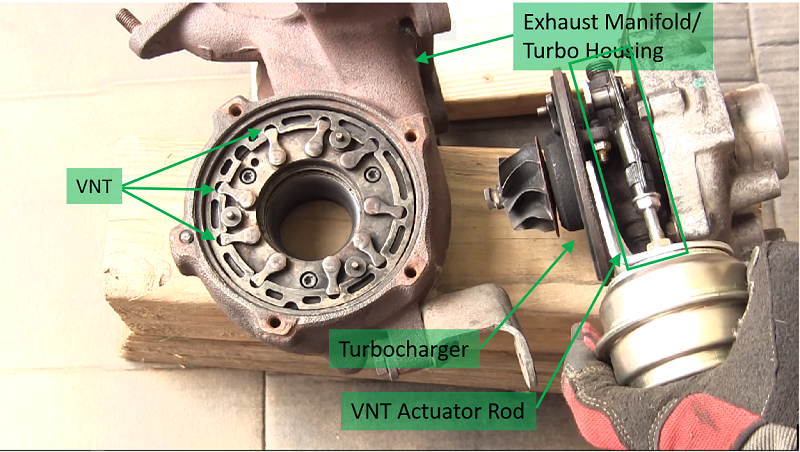 The easiest way to check for bearing failure is to pull the inlet hose off of the turbo, then putting your index finger on the turbo shaft (center of the compressor turbine) and check for end play. If you detect any side to side movement, the bearings are either shot, or very close to it. The turbo would need rebuilt or replaced at this point. The turbo should also spin freely. If it doesn't, further investigation can be had. If the shaft is shot (highly unlikely), the turbine wheel wouldn't spin. Definitely time for replacement or rebuild at that point.

If you pull the turbo off the car and pull it apart, if you see any type of damage to the compressor or exhaust turbines, such as chips or scarring, you'll need to get a new turbo as well. This is a sign the bearing may be shot as well. The tolerances are tight inside the turbo. Any shaft movement side to side will cause damage (turbines will start eating housing). It will be readily apparent upon inspection if this is the case.

First I would establish actuator movement. The failure of the actuator to move properly is the leading cause of VW turbo failures.

With a vacuum pump, such as a Mighty-Vac, or the Harbor Freight clone, draw 30" of vacuum. You can access the line for the turbo on top at the solenoid on the firewall.

30" should sustain for more than 10 seconds to a vacuum of 25 or more. If not, you have a leaky diaphragm, hose or connections.

Next, either looking from on top, or from under the car (easier to spot under) verify that the actuator moves at least 5/8". If it does, then the actuator itself is working OK.

If you have gotten this far, and the actuator does not move at least 1/2" you have either an actuator problem, or sticky vanes, or both. The most common cause is sticky vanes.

If the actuator is moving smoothly, and the actuator is holding vacuum, then your problem may be in the control circuit (solenoid and forward) or in the turbo. Usually a total actuator failure causes copious white smoke, from unburned fuel, due to lack of boost (and airflow).

Completely answering all possible scenarios is beyond the scope of this answer, but I will tell you that commonly there is carbon buildup in the vanes which limits their motion. Mechanical means (disassembly and cleaning) work well, but as you have noted are time consuming. A variant mechanical method, which a friend has done many times, is to move the linkage back and forth vigorously, with the actuator disconnected. This usually results in improved, but not perfect operation. A chemical approach involves a caustic agent, such as spray oven cleaner, being delivered to the turbo, allowing the carbon buildups to soften. Some have used this method, but I have not, although it is tempting.

Unfortunately I have not found a good guide to diagnosing and resolving VW turbo issues. However, there are several forums where people have documented their experiences and some experienced people share their knowledge.