How is ignition coil feedback useful?

Today I learnt that some engine management setups demand a feedback signal from the ignition coil. 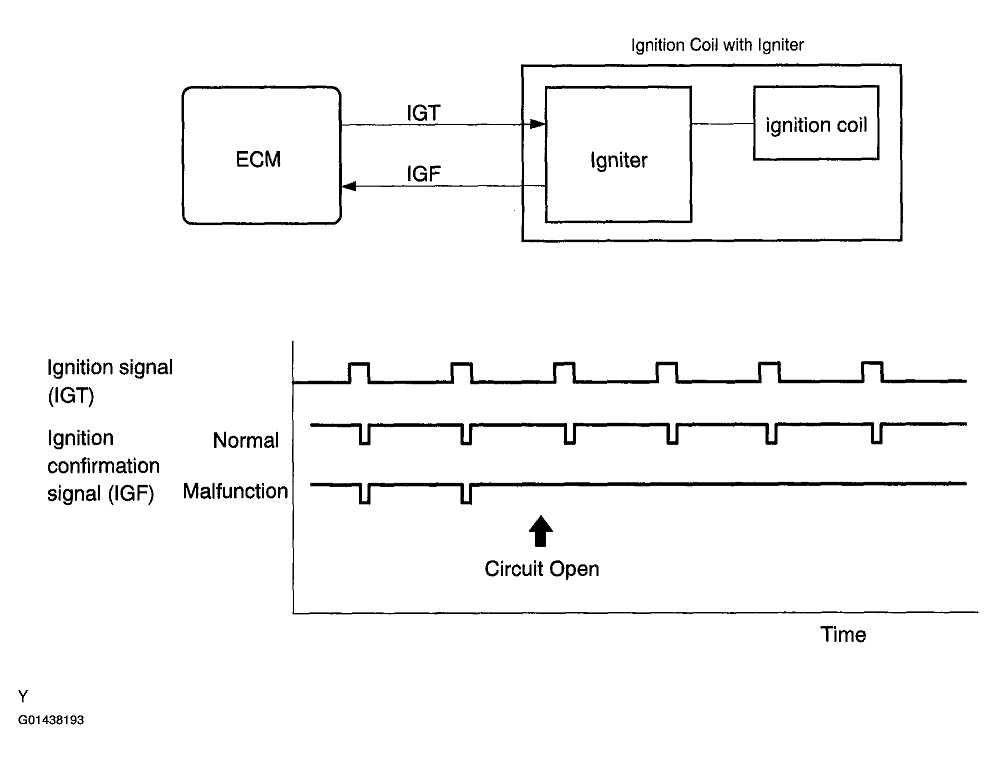 What does it do with the signal though? Is it just for diagnostics?

Pᴀᴜʟsᴛᴇʀ2's answer is pretty much correct, at least for Toyotas (the linked post in the OP was for a Lexus aka Toyota). Here is some extra detail. Also "feedback" is used for different things in different ignition systems.

This is from the official coursebook for Toyota's EFI/TCCS training course #850:

Once a spark event takes place, an ignition confirmation signal called IGf is generated by the igniter and sent to the ECU. The IGf signal tells the ECU that a spark event has actually occurred. In the event of an ignition fault, after approximately eight to eleven IGt signals are sent to the igniter without receiving an IGf confirmation, the ECU will enter a fail-safe mode, shutting down the injectors to prevent potential catalyst overheating.

Later, in the chapter summary, it once again states:

An ignition confirmation signal is generated by the igniter which signals the ECU with each ignition event. The IGf signal is used to provide the ECU with a fail-safe fuel cutoff if ignition spark is lost.

So this directly states the primary purpose:

The question the OP linked to confirms fuel-injector cut after nine missed confirmations (you can see it in the scope output), just as the description from the coursebook states. We can only conjecture why it keeps firing anyways - my personal theory is since it's primary goal is to prevent catalyst overheating from unburnt fuel, it just gives it periodic breaks then continues to retry, but it could also just be your everyday limp mode bouncing around at an RPM cutoff point. Or it could be smart enough to say "OK, since every igniter is failing to respond, maybe something else is going on and the coils still work". I mean; really, there's plenty of good reasons to cut the fuel injectors, but not really any great reasons to cut the spark plugs, so why not just keep going (the real question there is probably "why do the fuel injectors resume" rather than "why do the spark plugs continue to fire", but now we're straying). Who knows. Doesn't matter though, the purpose is clear at least.

Now, from that, we can also infer some secondary purposes, or at least nice obvious side-effects:

It's worth noting that the above was Toyota-specific. For example, Ford has a patent on a feedback-based dwell control system:

These were filed in 1990 and therefore expired in 2004 (when it presumably became available for others to use).

In this system, consider a possible initial state (pre-dwell corrected) of a coil charging mechanism: 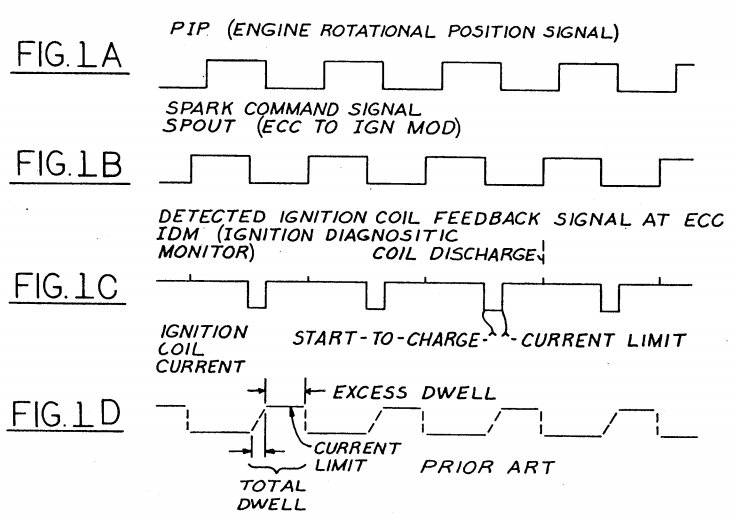 Here, current is sent to the coil. There's the initial charge time, but then the dwell is too long and so there's a delay before discharge. Also the spark timing is too late, because it took time for the coil to charge. So you add the feedback signal (Fig. 1C above), which goes low when the ignition signal is received, and high when the coil is charged.

Now the ECU knows exactly how long it takes to charge a given ignition coil, and can make corrections to the dwell time, and offset the ignition commands as well, allowing the ECU to start charging the coils far enough ahead of time so that the actual discharge (spark) happens exactly when it should: 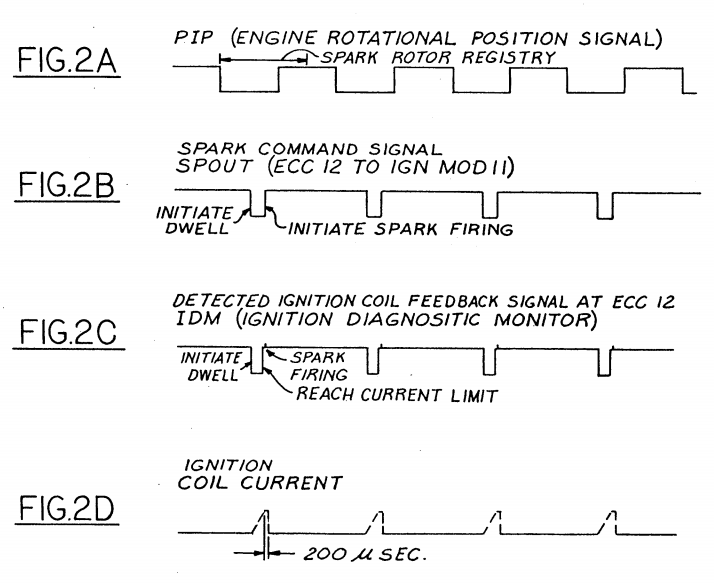 And the big advantage of this over a "hard-coded" dwell time is the ability to adjust to the current conditions of the environment and ignition coils, in real time, while maintaining precise spark timing.

It's entirely possible that vehicles after 2004 used this system since the patent expired.

And of course in addition to the dwell correction we still get the diagnostics benefits here.

There are some related patents as well (and probably more):

These were all filed around the same time in the late 80's and early 90's, it looks like there was probably a big patent rush for ignition timing control systems. I'm sure the lawyers and engineers in all those ignition system labs were consuming inordinately large amounts of coffee during that time period.

This patent describes the same dwell control system, but also includes some sort of pre-charge phase that can detect pre-ignition or fouled spark plugs. It looks pretty cool, but since this answer is already so long and this patent rabbit hole is virtually bottomless, I have to cut myself off here, but you can read more about it there.

Basically, there's a lot of uses for feedback from the ignition coils in general. Various systems use it for various things so it's not really possible to give a general answer beyond "it lets the ECU know when the spark plugs fire, so that it can do nice things".

I'm sure many other companies besides Ford and Toyota have a lot of other interesting things that they do with feedback signals from ignition coils.

There's tons of further reading. If you've got time, just start going through the citation lists from the patents linked above. Everything you've ever wanted to know about every ignition control system that has ever existed should be there somewhere, so have fun.

The ignition confirmation signal is a comeback signal to the ECM. This tells the computer a successful spark has occurred: the coil has launched it's goods. When the signal fails, the computer knows there's an issue with the coil or the ignition circuit and will send a fault code, then notify the driver with the glorious check engine light.

There's a still from this ScannerDanner video, which says the following regarding a 1991 Toyota:

So it is a confirmation for the engine management that the primary circuit pulsed on/off as expected.

Not the answer you're looking for? Browse other questions tagged engine-theory ignition-coil or ask your own question.