I have a 2002 Honda Odyssey that has recently developed an annoying habit of having its alarm go off unnecessarily.

There is no discernable pattern for when the alarm goes off - it has happened in several different locations, at different times of the day and different temperatures.

I have owned this car since 2009, but this has only become a problem a month or so ago.

I believe that the alarm is a factory-installed one and not an after-market. When it goes off it honks the horn and flashes the headlights.

I know this is not happening due to accidental actuation of the keyfob - the alarm just went off now and all I have is the physical key - the keyfob is on my wife's keychain several miles away. Having said that I did change the keyfob battery last week, but that didn't help.

The car battery should be OK. It is a nice Interstate-branded battery and is less than 2 years old, and appears to start the engine with no difficulty. (I will get the battery checked out when I get a chance though). Update - I just had the battery checked at the local parts store and apparently its fine.

I have searched google and found that a similar problem is often caused by a faulty hood-latch switch. I used these youtube instructions last night to disconnect this hood-latch switch, but the alarm still went off in the night.

What could be the cause of this and how could it be fixed?

We were dealing with a similar problem with a 2003 Odyssey. We watched the YouTube video and disconnected the hood switch connector, and the problem was improved for several months. Out of nowhere the alarm started going off when opening the door, turning on/off the ignition. The red flashing "alarm" light was clearly visible on the dash.

I took the car to Honda and they told me that if the car is locked via the remote lock, and unlocked via key, it disrupts the circuit and the circuit must be reset. They said to unlock and relock the door manually using the key in the door lock, and then unlock and relock the door using the remote. When they did this, the flashing alarm light turned off and the alarm hasn't gone off since.

Hope sharing this helps someone else because I'd never heard this before!

I have a workaround and its been in place about 6 weeks over 1 year now, so I feel confident to post it.

I left the vehicle with my prefered independent mechanic for two days. Regretfully the alarm didn't go off once in his care :-/

Similarly I took it to my local dealer and had their "alarm specialist" look at it. Again nothing found. But the next day, the alarm still continued its random behaviour.

So my attention turned to disabling the alarm completely. The dealer said this is not possible and the indy mech was unsure. I found some hints online but I think they were for after-market alarms instead of factory-installed.

My fix is simple:

This makes the alarm system think that the hood is open and it never arms the alarm. I verified this using the two tests listed above. The alarm has now not gone off for 6 weeks.

In my car, the reason for the alarm going off randomly was water leaking from the "body seam" on the roof, through the left front pillar, and zapping the computer.

Here is the wiring diagram and all sensors (switches) that could be faulty. You could disconnect the connector from the Drivers Mutiplex Control Unit and test the sensors wires to ground, there should be no continuity to ground with all doors, hood closed. Unfortunately I don't have a location for it. 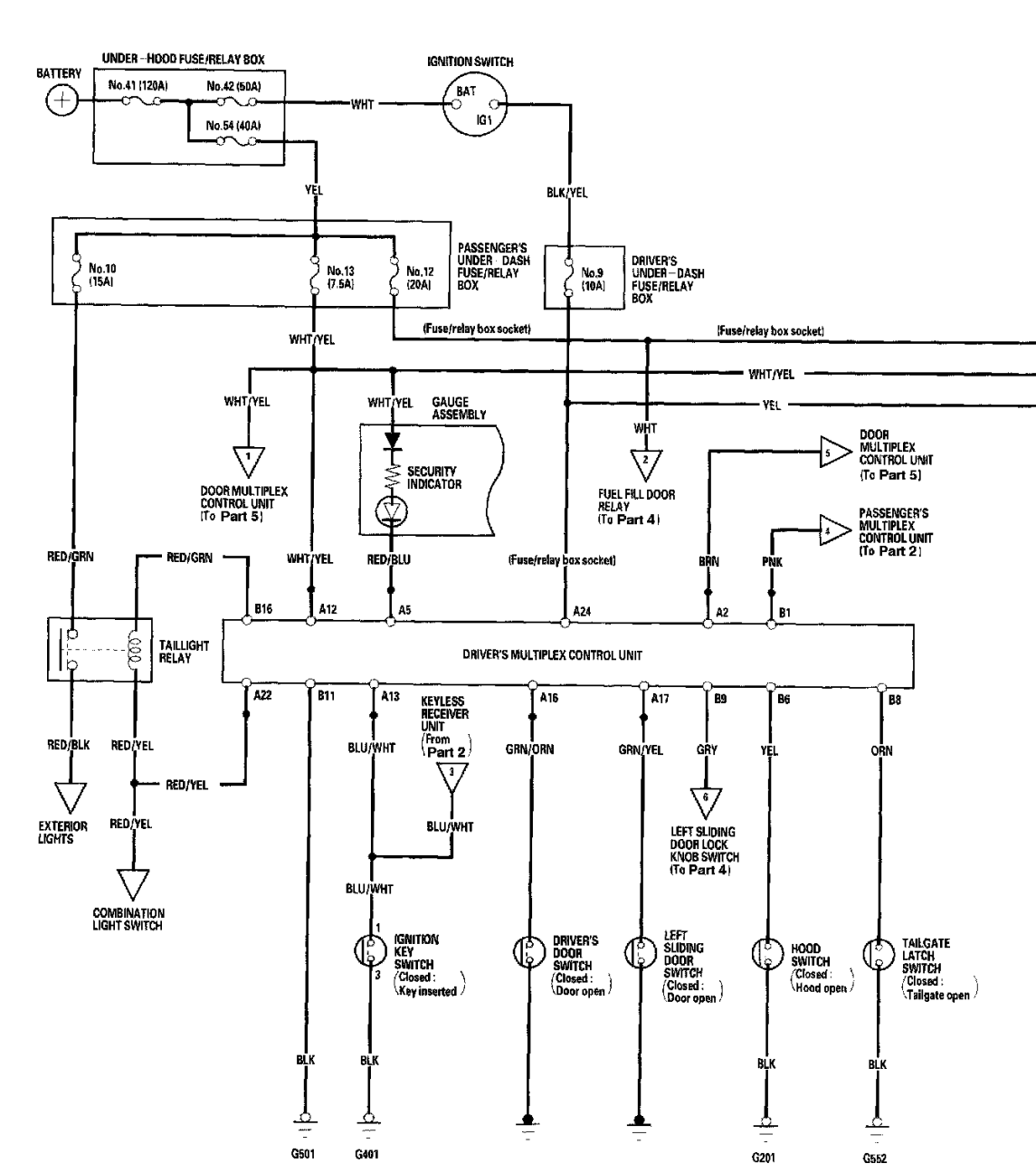 Not the answer you're looking for? Browse other questions tagged honda key alarm odyssey or ask your own question.

0
2012 CR-V alarm going off randomly: which switch is the culprit?

4
Flaky alarm system
1
Alarm system appears to be going out?
4
Factory panic alarm going off after changing battery [97 Toyota Camry]
1
Can heat plus vibrations from passing cars cause a car alarm to go off?
2
My '06 Nissan 350z (UK) alarm goes off when battery connected
6
Why is a modem triggering car alarm?