What can I do to combat wire embrittlement?

I live in a very hot climate where temperatures regularly touch 45 deg C and the heat in the engine bay area means that under-hood wires, especially the thinner ones, endure high levels of thermal fatigue.

As a result, when working on older cars (10+ years) I am very apprehensive about flexing any wiring in the engine bay area in case I introduce a break (and a new headache). This includes wires for things like coolant temp sensor, MAF sensor, coil and injector power supply

Is there anything that one can do to delay the onset of wire embrittlement? Would it help if manufacturers use a different grade/gauge of wire to help with longevity?

So if you have wires failing I think there is something else going on.

The problem with dealing with failing insulation is that there isn't much you can do about it – short of rewiring the affected parts. In a modern car that could be a non-trivial project. As Agent_L mentioned there are good high temperature insulation materials, but retrofitting them isn't really practical in many cases.

There are a few practical things you can do:

Heat and thermal stress, even at engine bay temperatures, is not generally the cause of copper wire failure. There is "hydrogen embrittlement" for copper but that only really comes into play at 400C+ in hydrogen-rich environments, usually during annealing. Also, the 20-30C higher range from your hotter climate is pretty negligible from copper's point of view.

Copper's linear thermal expansion coefficient is roughly 17 micrometers / meter / degree C (off the top of my head, you can look it up though). It's very negligible in the lengths found in most wiring applications and especially negligible when the wire is just hanging there with plenty of space to expand/contract without inducing mechanical stress.

Copper is also specifically chosen for wiring because of its high tensile strength and great durability, not just its high electrical conductivity. Aluminum, for example, is a lot cheaper, makes perfectly fine wiring, but has a lower tensile strength and higher thermal expansion coefficient, meaning extra care needs to be taken to managing it (aluminum's big advantage is cost and weight; they use it in a lot of long distance overhead wires).

Copper also has a high thermal conductivity, meaning "hot spots" in wires tend to even out quickly, reducing internal stresses due to uneven expansion. It also has a fairly high resistance to corrosion from environmental factors like moisture and oxygen, although of course it is not immune and this can be an issue over time.

In a way, copper is the solution to the types of stresses that wiring generally undergoes in an environment like an engine bay.

The primary failure modes of wiring are usually:

Oxidation is probably the issue that'll cause you the most problems over time.

So from all that I would say:

When you say "embrittlement", are you talking about this? 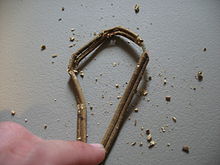 This is a common issue with PVC used as insulation: PVC is brittle by nature an needs plasticizers to be added to it when making cable insulation. Over time, plasticizers evaporate (remember that "new car smell" which gradually goes away?), brittling the PVC.

Is there anything that one can do to delay the onset of wire embrittlement?

You could keep your car in the garage and not under sunlight / rain. That will reduce both copper corrosion and insulation embrittlement.

Would it help if manufacturers use a different grade/gauge of wire to help with longevity?

Obviously, using bigger copper gauge and thicker insulation would make wires more robust. Also, replacing PVC insulation with a more robust one (XLPE or similar) would also help. Since it would also be more expensive at no benefit to the manufacturers, they wouldn't bother.

Not the answer you're looking for? Browse other questions tagged electrical wiring heat or ask your own question.

2
Wire attachments for KnuKonceptz Wiring Kit
4
Upgrading starter wire?
15
Do I have to rely on wire color to correctly wire up an O2 sensor?
3
Cracked & frayed wire everywhere!
4
Wire Lights '72 CB750
3
When to use chassis and when to wire to battery neutral?
1
troubleshoot a shorted trailer wire
2
How do I remove this wire?
1
Finding wire for "Unused Fuse"
0
Can an insulated copper wire oxidize down its ENTIRE length?