I've had alternator issues before but this is just weird. The car cut out flashing the battery warning symbol. To me, this seemed like an alternator issue (which I had replaced 4 months ago, as well as a new battery) AAA came out and tried to jump the car and could not. When the key is turned the ignition comes on and all interior and exterior electrical components (apart from the rear right tail light) appear to work. When the key is turned all the way to start the car nothing happens. No choking sound, no stuttering, no lights flashing (like during last alternator problem) or anything. According to the technician, the battery appears to be fine. Could the alternator and starter motor cut out simultaneously? I'm scratching my head here.

Car just ticked over to 100k and everything seems to be breaking at once. New brake discs, new power steering pump, reverse lights breaking, and now battery and alternator issues.

Since the car cut out while running and it wont crank, but everything else reportedly works, this kind of sounds to me like an ignition switch or immobilizer problem (or associated wiring somewhere along the line) more so than a starter issue.

Disconnect your battery then do a visual inspection of your ground points and starter/ignition/immobilizer wiring, pop off the connectors, check for corrosion and proper seating, loose wires, check continuity and resistances with a multimeter. Clean corroded connectors, replace broken connectors and wiring. Make sure all fuses and relays are properly seated, check for any blown fuses. Note a wiring problem may be under the dash somewhere, not just in the engine bay.

You can test the ignition switch with a multimeter and cross referencing the vehicles wiring diagrams.

It does not sound like a battery or alternator issue. It's significant that it both died while running and wont try starting.

There is a 30a fuse in the battery junction box (engine compartment), be sure it is good, should be 12v on both sides of the fuse, if only one side the fuse has 12v fuse is bad, if both sides 12v fuse feed is open circuit.

There is a starter relay in the central junction box (behind dash panel left side), it could be defective. Starter relay location image below. You can swap the drl relay with the starter relay to verify if it will start now. 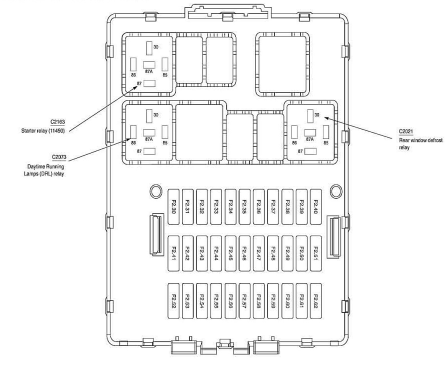 Depending on if it is manual or automatic trans,

Manual, the clutch switch could be bad or anti theft issue.

Car from years ago - Its cabling between the Alternator and Battery had multiple connectors, and they corroded over time, the symptoms I got were that the car would run fine in daylight (unless it rained and I operated the windshield wipers, or lights) and not long at night, the Battery would run out of power. The reason for the problem is this - Say the wiring between Alternator and Battery has just 1 Ohm of resistance - The Alternator cannot charge the Battery at more than maybe 10 Amps, and that's including the load of the car's electrical demands, due to Ohm's Law (i.e. 20 Amps for the headlights, 10 Amps in from the Alternator, this is not good!) as at 10 Amps that 1 Ohm resistance would mean a 10 Volt drop in that wire, so the Alternator has to generate 20V at 10A instead of 14.5V at 60A - Meanwhile that bad connector is getting pretty warm, corroding more, etc. so it goes to 2 Ohms then 10, and so on; Pretty soon you're stranded with a dead battery.

Debugging it was maddening - I removed the Battery and Alternator and took them in to have them tested, "Why won't this Alternator charge the Battery?" and both tested perfectly normal and functional. Had me pulling hair out till I got it!

So my suggestion aligns with Jason C.'s, for safety disconnect the ground lead on the battery and THEN test the cable connections for resistance with a Voltmeter; If you find a high resistance joint, repair however works for you (I bypassed the high resistance joints with a heavy #4 AWG cable directly from the battery to the alternator, as the manufacturer had put about 12 connectors in there for who knows WHAT reason and I lived out in the sticks - and just needed it running right. I'm an electronics guy tho.)

Edit: Re-read and thought, is it possible that the wire from the ignition switch to the starter solenoid, is failing somehow? Unsure if on that vehicle there's a relay on the firewall / inside the engine compartment, Ford USED to do that a lot, you could test by jumping that with a heavy wire to Battery + at the relay; If not you can usually short the solenoid on the starter to +12 in some fashion, just don't rig yourself up so the car runs you over or the like! If the starter is fine but the key won't turn it over, it will either be the key switch or the wire to the relay or solenoid, or that relay or solenoid. That begs the question of what failed and shut the car down though, so definitely look for the cause of that!

Not the answer you're looking for? Browse other questions tagged electrical battery alternator breakdown or ask your own question.

7
Car battery appears good but car won't start
2
2004 mustang v6 new altenator and battery
1
Should a 2004 Mazda 3 run after jumping when battery has a dead cell?
1
ABS and Brake light fault after battery disconnected
1
What does the 'battery' light on the dashboard actually mean?
1
2012 Kia Forte Electrical? Power?