Options for catch can setup

I have an '04 Infiniti G35 6MT coupe, 97k miles, completely stock. I'd like to install a catch can to help diagnose and possibly reduce some oil consumption (Previous question with more details on oil consumption).

I've seen a few ways this or other PCV modifications are done:

What is generally the best setup for this? Are there other possibilities?

EDIT: Pictures of my setup. I think I used 24" of high pressure hose total, and my canister happens to sit nicely behind the bracket that holds the PS reservoir.

I have an '06 G35 6sp Sedan (145k miles). I installed a catch can using the first method you listed, by adding it in line with the existing PCV valve<->intake plenum.

For your application, I'd say that would be the best method, as a sealed system will give you the best idea how much oil you're losing through the PCV. My reasoning for installing a catch can (besides wanting another project to do) was to keep hot oil out of the intake plenum since I had also installed a modified lower plenum, plenum spacer, aramid gasket, SRI, and copper TB spacer, which made a noticeable difference in plenum temperature. Having again removed the upper plenum after 10k with the catch can, I was pleased to see the plenum was still more or less oil free vs when I took the original plenum out (see picture below).

I was surprised how much oil I 'caught' after installing the can. I empty it every couple weeks (500-700 miles) and it's usually getting close to full (150 mL), unfortunately that's nowhere near the half quart (1000ish mL) you're losing every 700 miles, but it'd still be worth looking in to.

If you haven't changed your spark plugs, crumbling valve cover gaskets that leak into the spark plug wells were a common problem on the 05-06 VQ35DE REV-UP engines, so it probably wouldn't be a bad idea to at least pull the ignition coils and check them for oil.

These engines are known to last, so I'd be surprised if it was a head gasket or piston rings, though it's probably also worth checking if your coolant is cloudy.

Below is the old lower plenum after 85k miles without a catch can. It's not a great photo, but you can see the oil residue in front of and on top of the runners. When the clean plenum was installed and run 10k with a catch can, it still relatively new (thin film of oil in the vally that's inside the runner in the bottom right of the picture). 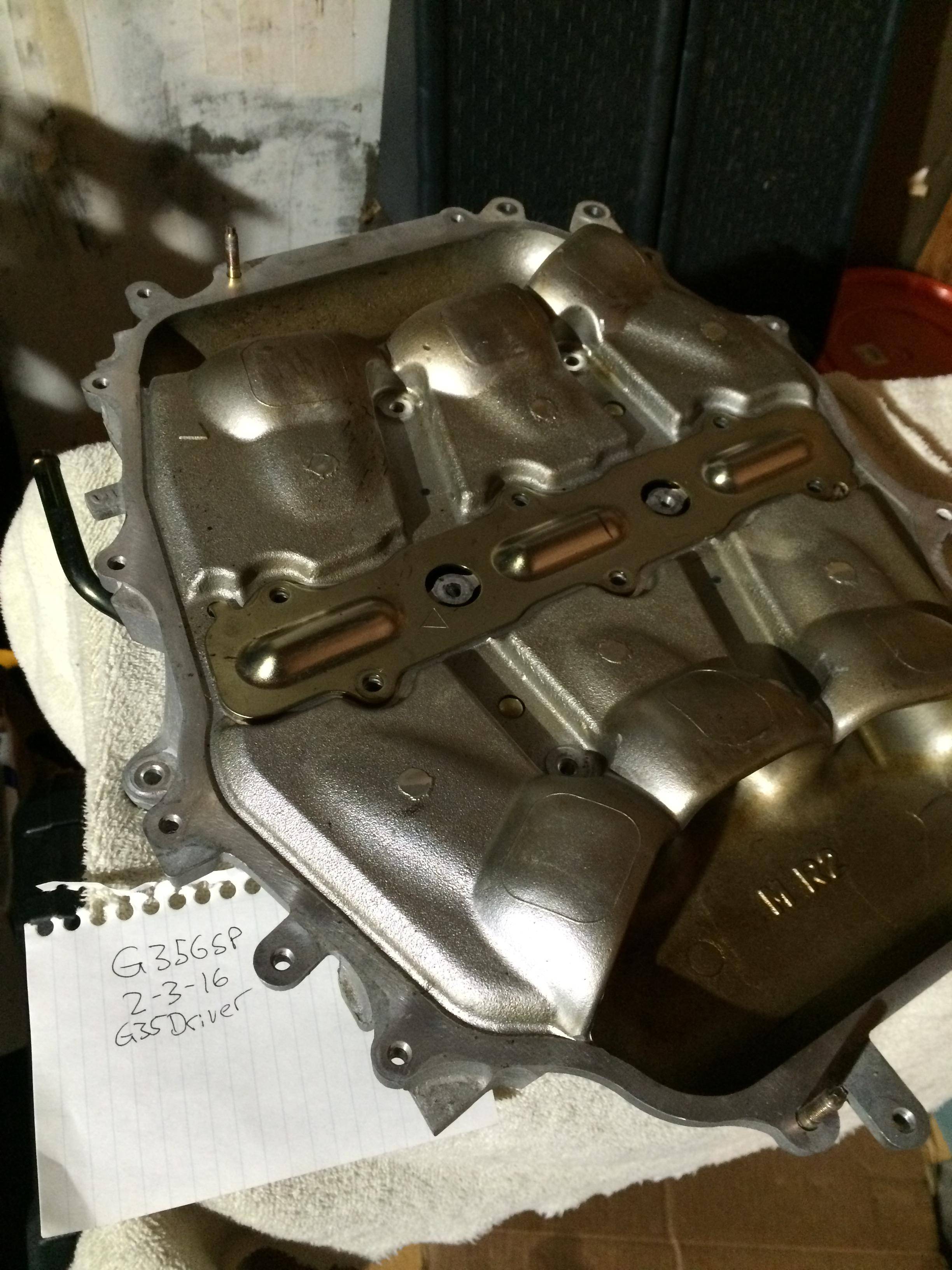 Catch cans are common on modified turbo engines (they sell kits), what you suggest is the way to do it. Most catch cans have a drain in the bottom so you can drain the can and see how much oil is being pushed through the pvc system over a given amount of engine run time.

The only reason to vent it through a pvc valve into the intake is for emissions purposes, you can eliminate the pcv and dump it into a vented can if you wish.

Not the answer you're looking for? Browse other questions tagged oil nissan infiniti g35 or ask your own question.

11
Is the vent from the pcv valve back into the air intake really needed?
5
High / fluctuating oil pressure causes?
28
What causes an engine to burn oil?
11
2001 Infiniti QX4 rough idle - leaking fuel damper vacuum port
5
Diagnosing oil consumption on Nissan VQ35DE (350z / G35)
5
Planning to fit an oil catch can into my car. Any problems with this setup?
3
Engine started to consume oil