How does an ignition switch work?

I know it's different in every make and model but for just a guideline how do a Ignition switch work? I know about the the ignition system but how do electricity follow from the switch down to the ignition coils?

Basically, your car has several circuits:
Always On - Connected directly to the battery and is not affected by the ignition switch. This includes: alarm, interior lights, brake lights, headlights, computer memory (radio, ecu, tcm, bcm)

Accessory - Items that the driver needs, but are not necessary for the vehicle to run. These include: radio, HVAC, windshield wipers

Run - These items are necessary for the engine to run. Items include: ecu, fuel pump, coils(s)

Start - This circuit runs the starter.

The ignition switch controls which circuits get power from what position it is in.

I would like to also note that many igntions switches have and UNLOCK position that allows you to turn the steering wheel (and possible shift out of park) while none of keyed circuits are active.

Adding to rpmerf's answer, in cars equipped with an immobilizer they are an integral part of the ignition switch and electronics, so probably worth a mention.

There's a few different types but the general idea is:

This makes it more difficult to hot wire the vehicle. They're supplemental systems for the usual ignition wiring. They don't generally affect the ignition switch directly, but instead act as a second line of defense after the switch to prevent the car from running if the correct key is not physically present, and they are part of the path "from the switch down to the ignition coils".

These systems are mandatory in Germany, UK, and Finland since 1998, Australia since 2001, and Canada since 2007 (says Wikipedia). Even in countries where they are not mandatory they are still very typical.

There's also often other switches and such that can prevent the starter from starting the vehicle (by disrupting the electrical connection to it) such as the shifter switch on an automatic (making sure you e.g. can only start the car in park/neutral), the clutch pedal switch on a manual (making sure you can only start the car with the clutch open), etc. You'd have to check the wiring diagrams for your car. Here's the relevant portion, as an example, from a 5th gen Honda Prelude: 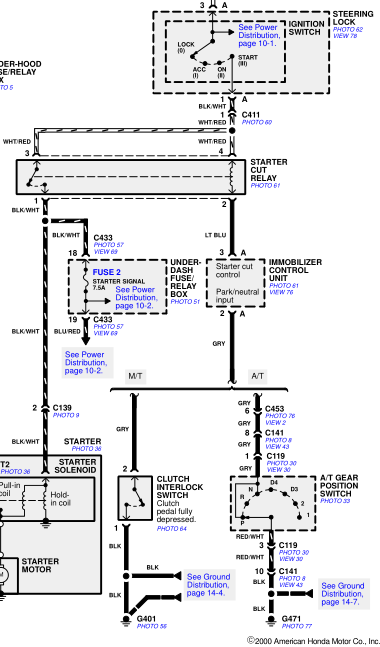 There you can see that the immobilizer (along with the shifter / clutch switch) have the power to prevent the starter cut relay from closing, thus preventing power from going to the starter. The ECU (not shown here) also cuts power to the fuel injectors if the physical key is not present (so you can't e.g. hot wire then bump start it).

Not the answer you're looking for? Browse other questions tagged ignition-switch or ask your own question.

0
What are the Ignition Switch Wires for?