First time I looked at this the A/C compressor clutch wasn't engaging. Long story short: the high side pressure switch on the back of the compressor was unplugged. Noted that the engine was shaking (like it was misfiring) as I was watching them add refrigerant.

The next day I get the call asking me to look at why the van wouldn't accelerate was misfiring etc...

They had replaced the engine prior, the old one had head gasket problems as I was told. I was also told they compression tested the engine and all the numbers were roughly equal though they couldn't find the numbers they had written down. The intake gaskets are new and plugs and wires are new.

Thinking that the exhaust may have been plugged they disconnected both banks after the manifold, it still won't accelerate. They also tried with the MAF unplugged as well, more of the same.

Pulled whatever codes they had in the computer.

This makes sense with the exhaust and MAF being unplugged. Though the P0175 may need to be looked at further once they hook the exhaust system back up.

Cleared the codes and let it idle while looking at misfire monitors.

On start up cylinders 1 & 8 showed around 80 misfire counts each. Then the misfire cycles stop for no apparent reason... At least this gives me a place to start.

A capture of engine PIDS on a hot start. Engine MAP is high at idle, suggesting low engine vacuum. 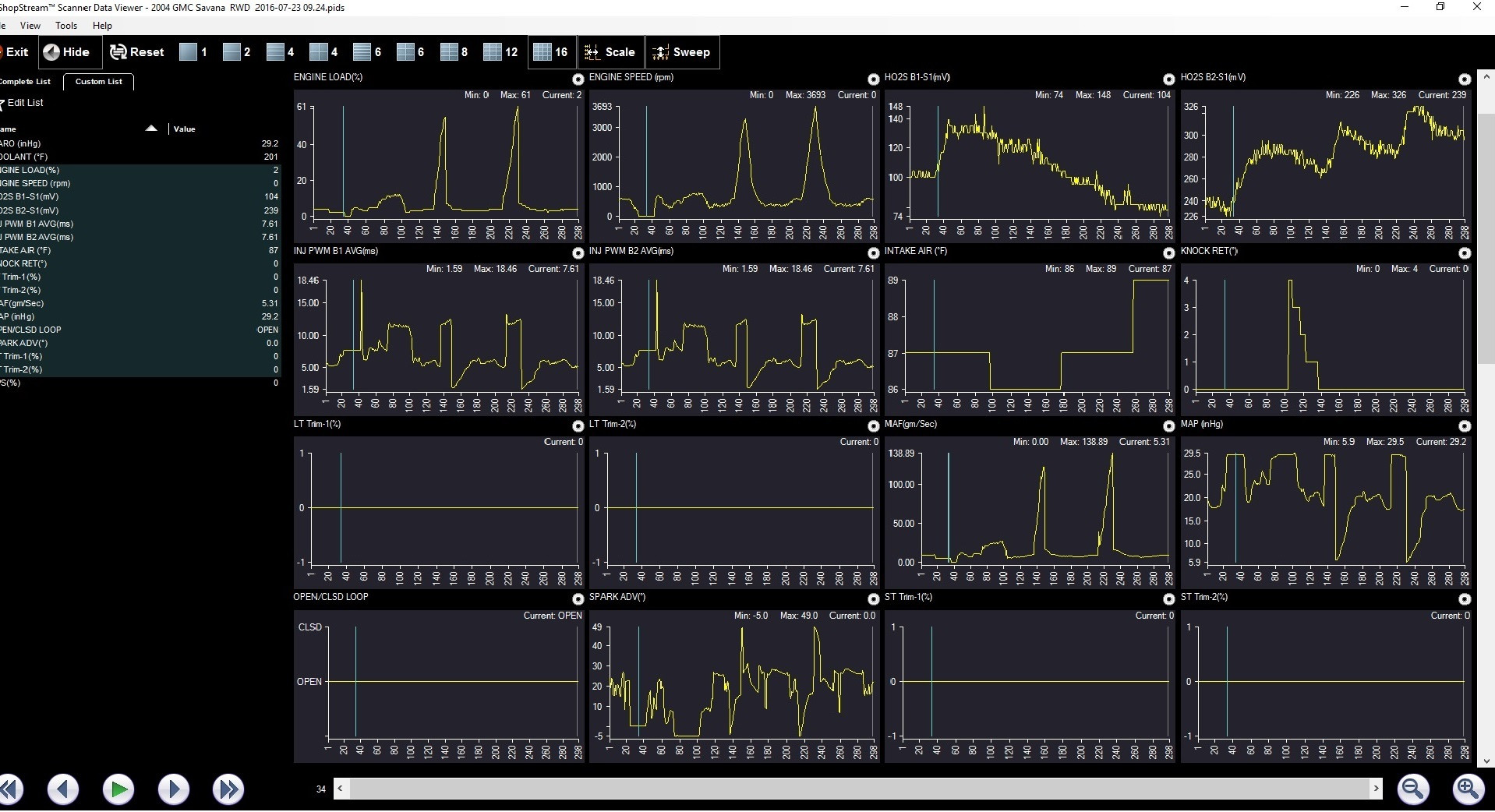 I didn't have a vacuum gauge or transducer with me (I want a WPS500...) so I asked if they had one. Of course they couldn't find one, so I'll leave that for later.

After a few seconds of idling The check engine light comes on with a P0200 Injector Control Fault.

I decided to focus on cylinder #1 as it was the easiest to access and I didn't have anything in the way of hand tools.

This is a capture of the bank 1 ignition and injectors at idle. 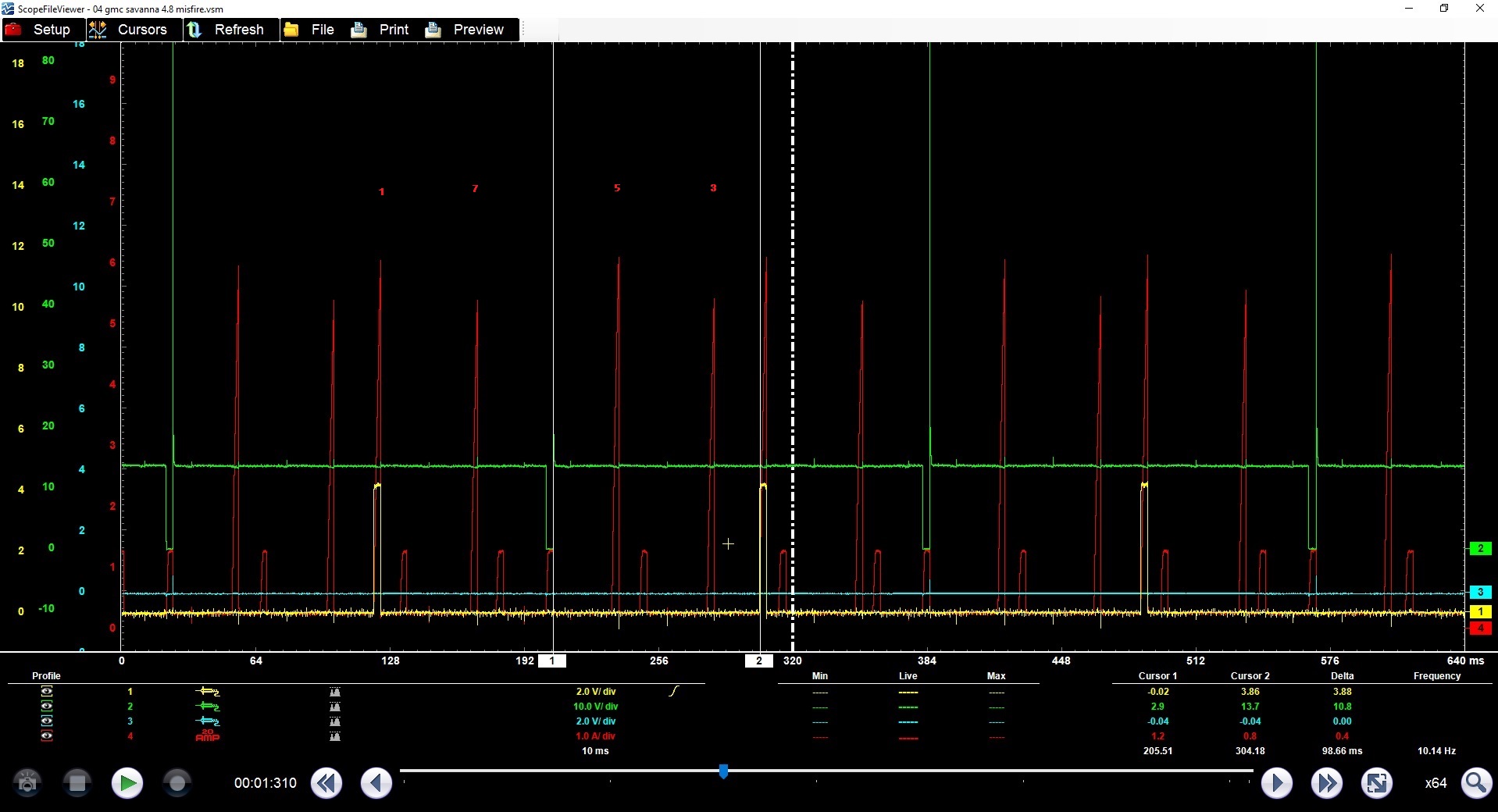 So I suspect that the engine has multiple issues.

Low engine vacuum according to the MAP sensor reading. Maybe a restricted MAP sensor port? Maybe, but I doubt it the range is too good on the PID capture. Bad MAP sensor? Another maybe. Leaking Intake? I'm pretty sure it is. There was a hissing sound but I couldn't nail down the source. I asked them to smoke test it when the engine was cold and get back to me. Valve timing? Another maybe. The P0175 may be related.

The P0200 code. Honestly I need more time with this one, why would the injector be firing so early? The timing looks off too. I think the harness connections may not be in the right spot. Or there's something wrong with the harness.

Ideas? Comments? I'll be taking another look at it tomorrow probably.

Make sure the cam and crank signals are good. Also check the reluctor for the crank and cam sensor.

Not the answer you're looking for? Browse other questions tagged engine troubleshooting gmc misfire savanna or ask your own question.

4
Random Cylinder Misfire in Cylinders 2, 5, 6, and 8; P0300; Chevy Silverado 1500 4WD
7
The Mystery of the Misfiring MINI
3
Cause for a P0306 misfire code on a 2002 Toyota Sienna?
3
Corolla gives me a P0170 code
3
Rough idle and 02 sensor voltage drops to zero, cylinder 2 misfire
3
Narrowing down cause of misfire when engine is warm
2
2006 Buick LaCrosse misfire - Replaced coil pack, new plugs, new wires, 2x junkyard ICM. Still no luck
1
Subaru Forester - petrol coming out unlit in bursts out exhaust. Ideas on what could cause it?