So I work in this lab with a small dyno for a two wheeler engine hooked onto it. The engine hasn't been used for years and I had to correct few things in the wiring. I had to remove the flywheel rotor to check the pick up and the condition of the coils and while putting it back, I am pretty sure I did not put it back the way it was. I think I know the answer but I am going to try. Will the ignition timing change when the flywheel rotor is put back together differently?

I have attached an image for reference. 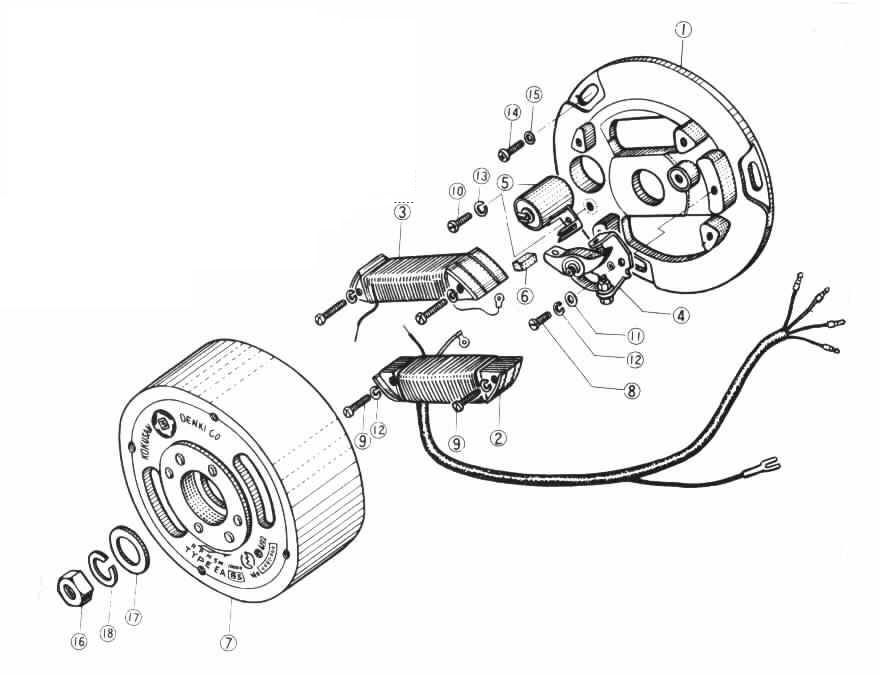 As Steve Matthews says, get your flywheel in a proper position, it shouldn't be able to fit it wrong way. Unless you have lost a part number 6 "keyway". To me looks like

If anything not right let us know, we will get it running :)

I would say that, almost certainly, the orientation of the flywheel relative to the position of the engine will be important. Looking at the diagram, I'd guess you physically removed part number 7 to inspect what was inside. Part numbers 3 and 2 look like some sort of electromagnetically wound induction coil and I assume that the wiring coming out of part number 2 is the low tension side for the ignition system. Part number 4 looks like some kind of "points" system which is probably responsible for triggering the ignition event.

I'd also guess that the screws (part 9) fit through the elongated holes of part 7 which gives them some scope for fine adjustment. You are almost certainly going to need to align the ignition timing events from the parts shown here to the engine position.

You'd usually expect components like this to have either a "keyway" (which forced them to be fitted in the correct orientation) or that there would be some manufacturers marks somewhere in the body of the parts to line up. If you can't find these or any other data regarding starting positions, I'd be tempted to try and time the ignition event to somewhere near Top Dead Centre (TDC).

On a four stroke engine, this is the point in the rotation of the engine that the inlet valve has closed and the piston has then traveled as far up the bore as it can go. Once past TDC, the next valve to open will be the exhaust valve but this will not happen until after the piston has traveled down the bore. On a two stoke engine, it's easier to establish TDC as this is the point that the piston is at the top of the bore and will go no further.

This can be established by removing the spark plug and using something soft (that will not break off, I've used a drinks straw and a pencil in the past) to work out the piston position. Once you've established TDC, make a small paint mark somewhere on the rotating parts of the engine so you can line it up.

Next you need to establish when the ignition event fires. You need to be very careful here as you are dealing with high voltage and there is a shock hazard. The preferred method is to use a timing light but assuming one is not available, you can hold the spark plug WITH INSULATED PLIERS against the engine block. With the ignition on, tuning the flywheel (i.e. part 7) with retaining nut (part 16) either loose or removed so that only part 7 and not the shaft to which it is attached moves, should cause the plug to spark at some point in the rotation.

If you can't rotate part 7 without moving the shaft, this is why it's important to mark TDC somewhere. Once you know the point at which the plug fires, you should be able to either refit part 7 in the orientation so that this takes place at around TDC or adjust parts 2 and 3 by loosening screws 9 and moving them.

If you get no spark at all, check that the points are opening and closing as you are turning things over. It's the closing / opening of the points that usually triggers the ignition event in a system like this.

Provided the engine is getting fuel, it should sound like it is at least trying to start with the ignition set at TDC. You can adjust it a couple of degrees forwards or backwards in small steps upto around 10 degrees either side of TDC. If the engine still won't run in these conditions, it's likely not the ignition timing.

The lesson here has to be, take photos or make paint marks (preferably both) before taking something apart.

Not the answer you're looking for? Browse other questions tagged engine four-stroke or ask your own question.

11
Brake Specific Fuel Consumption of 2-stroke vs 4-stroke
19
What is happening when a two-stroke engine is said to be “four-stroking”?
9
Acceptable amount of slack in a timing chain with high mileage?
7
Two-Stroke vs. Four-Stroke Diesel Engines - What is most commonly used in heavy vehicles?
4
What is meant by bore and stroke?
16
What makes two-stroke engines less fuel-efficient than four-strokes?
2
Two-stroke vs four-stroke design
2
Oil sump for 2 stroke vehicles