Loud whining sound after revving. Alternator, maybe (but why)?

I have a 2001 Honda Prelude SH (180k miles), I am trying to identify a whining sound coming from the right side under the hood. The sound consistently starts after I tap the throttle, lasts at a constant pitch for any where from 30 seconds to 5 minutes, then stops as suddenly as it starts: Video

The sound has been going on for a few months. I can't pinpoint the source vertically, but it's definitely coming from the ps pump / alternator / ac compressor area (all three are on top of eachother in this car): 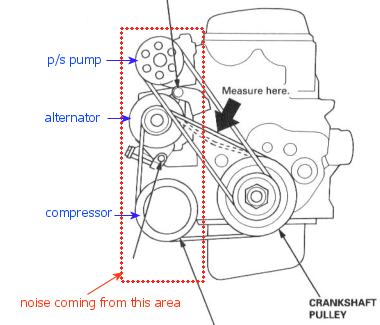 It doesn't seem to be the belts themselves (there are two, driven by crankshaft, one for the p/s pump and one for the alternator + compressor); the consistency of the sound's sudden start / stop seems to rule that out.

So I think it must be the alternator, since that's the only thing left. So my questions, before I start taking things apart, are:

I'm not sure if I'm having any problems with the electrics in the car. Everything seems to be functioning properly. The battery charges. It can handle full electric load at idle (I've tested with a/c + all interior/exterior lights + defrost on + stereo at max volume + an inverter charging a laptop while rolling all the power windows and sun roof open and close at the same time, has no problem, maintains a reasonable voltage).

There is an alternator test procedure in the service manual although I have not performed it. I don't want to start ripping out parts without a better theory.

If it is the alternator, I can't figure out why it would make that noise. I don't really understand how they work. The belt is always turning so I'm not sure why the noise wouldn't just always happen (assuming it's the alternator).

If it's useful, here is an exploded view of my alternator: 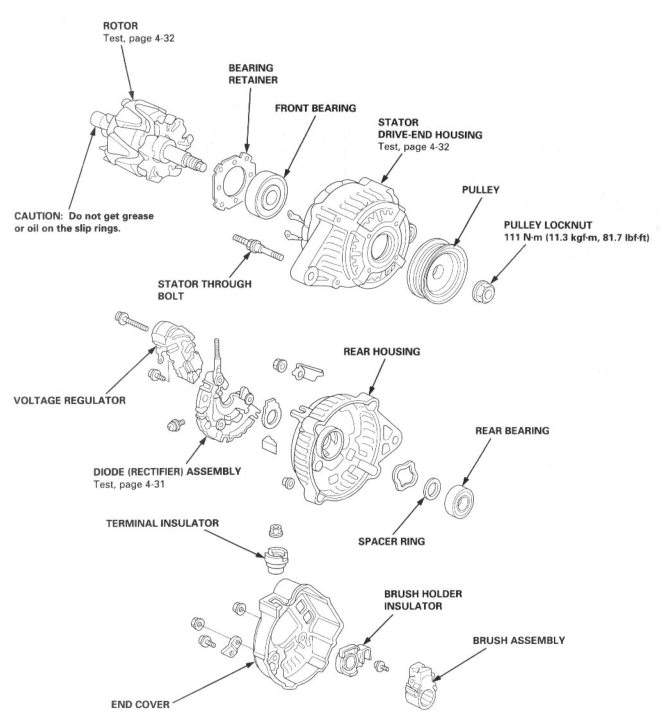 Is there something in the alternator that starts and stops spinning even while the input shaft continues spinning? I don't see any kind of clutch-looking thing in the diagram.

The alternator and compressor are the original parts. The steering pump... I don't remember, it's either original or at least 6-7 years old.

Try this: get a water spray and a friend that can help you to rev until the noise comes in, then start to spray one suspecting item, say, the alternator's pulley/belt. Just a bit of water there...and do with the rest if you don't see the noise disappear. What you will be doing is to lubricate the pulley with water, so the belt won't squeal. This is a very simple way to find slipping belt noises. Inside the alternator, there isn't anything that can mimic the sound of a squealing belt. Neither inside the a/c compressor. Those would produce other noises, aka, "grinding" because their bearings going bad...Other test could be if you unbelt the power steering pump, that will at least narrow the suspects.

Not the answer you're looking for? Browse other questions tagged honda noise troubleshooting prelude or ask your own question.

5
Honda Accord bubbling / gurgling sound when braking first few times
3
Slow chugs from starter with warm engine but not cool engine?
8
Grinding sound during cold start?
3
A/C Compressor not turning on?
2
1995 Mercury Grand Marquis, loud whine corresponding to engine revving
2
Car won't start, humming noise at the back of car
3
Does a grinding sound after a cold start mean the starter motor should be replaced?