Does AC usage change based on blower speed?

Does the AC compressor or expansion valve actually change based on any of those? I imagine the combination of on/off and blower speed engage a clutch in the compressor that can only engage/disengage. So, is there any significant downside to turning the blower on max?

Or, maybe I'm wrong and there are gears or something in the compressor or maybe the expansion valve is electronically controlled.

On most modern vehicles (like your CRV, without an orifice tube) the amount of liquid refrigerant metered into the evaporator is controled by a Thermal Expansion Valve, or "TXV". The TXV takes it's cue from the temperature of the evaporator core.

Critical here is the pressure balance operation of the TXV: 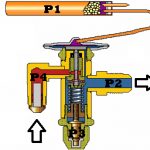 Note that the "bulb" (P1) is a sealed system, with a refrigerant inside, but unrelated to the refrigerant in the rest of the system. The bulb is physically buried in the evaporator core, and reads the temperature of the core by thermal conductivity. The pressure inside the bulb rises as the core temperature increases. This pressure cooperates with the head pressure to open the TXV and allow more refrigerant into the evaoprator core.

Another useful purpose of the TXV is to prevent evaporator icing, which has a runaway effect if left unchecked. Ice crystals block the airflow, less heat is absorbed into the evaporator, more ice is formed, less airflow ... The TXV bulb will radically drop in pressure as the evap temperature approaches freezing, and cause the TXV to completely shut off liquid refrigerant flow into the evaporator to prevent this condition.

While I agree that most compressors (like your '04 CRV) are basically on/off devices, this does not describe the entire picture of energy, work, and heat conservation. Also, I am NOT suggesting that the TXV is used for cabin temperature control. Other posters have correctly mentioned this is almost always accomplished with the "blend door" mixing in heat with the post evaporator flow.

In fact, some compressors [very expensive German ones] use a variable swash plate that can change the stroke (displacement) of the compressor on the fly. Controlled by the ECU usually, by a multitude of inputs such as engine RPM, AC load, road speed (condensor airflow), emissions, idle, engine load (WOT?), and fuel efficiency goals. In this case, the compressor changes how much "compressinating" it needs based on load control from the ECU. These systems, while uber-trick, probably cost more than their efficiency gains.

From my understanding, the occupants cannot control the actual pressures (and thus temperatures) produced my the AC system, nor can the occupants change the state of the expansion valve.

It is my understanding that auto AC systems (which I have little experience with) work similarly to commercial building HVAC (which I have a bit of experience with). The main similarity being that it is a Boolean systems. On or off, nothing else. I know that the compressor can change because of RPM of the motor, but it will engage/disengage if the pressure created is out of range.

That said, the only downside to running your blower at max would be that you may get cold. Technically you do lose some of the motors power to the AC compressor when AC is on, but that is a constant loss, and is quite negligible.

One thing I forgot is the temperature knob or climate control. If this is like residential and commercial systems, it simply sets a target temperature to maintain. So the actual compressor and heater coil gate will be activated or deactivated as is needed to get that temperature. This is usually monitored by an indoor sensor as far as I know. Anyone with more specific knowledge in this aspect is welcome to amend this statement.

Point being, with regard to

Yes. But in an on/off fashion. Not in terms of strength or degree of cooling. That part is constant.

Not the answer you're looking for? Browse other questions tagged ac climate-control or ask your own question.

3
Air conditioning gradually stopped working, hissing noise
8
Does turning fan speed down affect AC compressor load
7
Why does the Air Conditioner compressor cycle on and off even when it is hot in the car?
5
Honda Civic 2007 AC compressor replaced, clutch not engaging, no ECM signal
2
A/C button not switching on compressor
1
2012 Ford Escape A/C blowing hot and lowest blower speed not working
0
Why does my car AC vents blow hot air when AC is switched off?