I need to remove the alternator from a 1.3 4E-FE engine in a 1998 Toyota Corolla, but have ran out of ideas to do it. This is the photo of the alternator in situ: 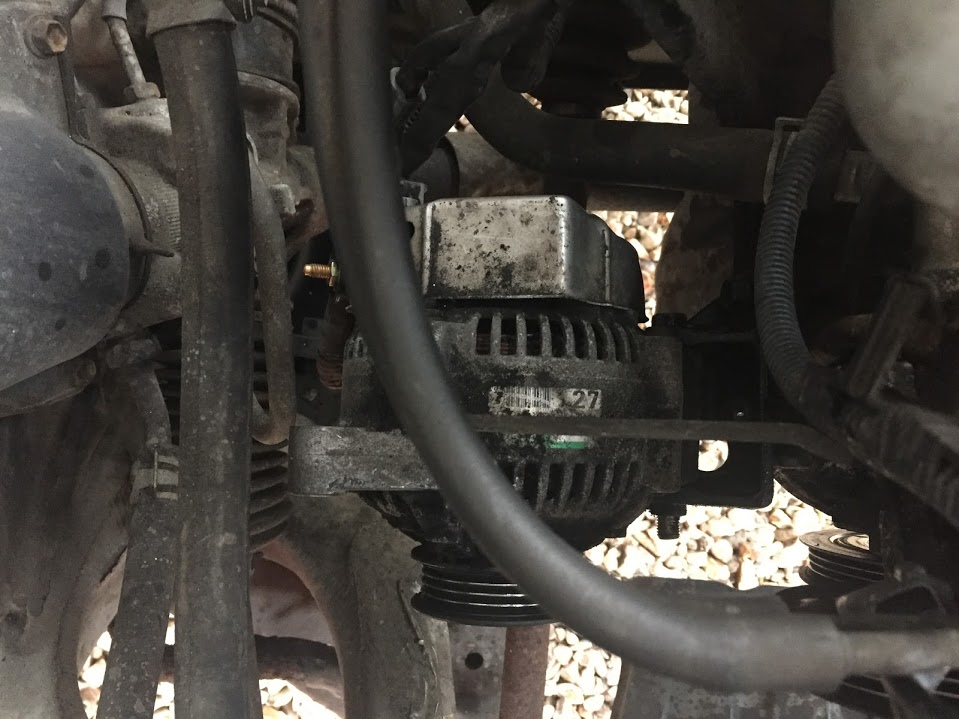 To the right of the alternator is the pivot bolt which is what is holding the alternator to the bracket which is connected to the engine. I've removed the nut so the bolt should be able to be removed, but I'm not able to do this. I've taken several spanners and ratchets to the bolt head but I either have no room to get a good fit on the bolt or when I do get it to fit I have no room to turn the tool.

I then tried to unbolt the bracket from the engine, but I have the same problem. No real space for me to get a ratchet in or enough room to move it.

Has anyone got any ideas on how I can get this alternator out? The adjustment bolt broke off at the top of the alternator so I need to remove it to get this bolt out, as well as change the bearings inside the unit.

It depends what tools you have available and whether you are replacing the alternator. I would probably resort to using my air hacksaw to cut through the bolt just inside each end of the bracket. This will release the alternator. The alternator should be reusable, maybe just needing a washer or two to make up the space cut by the hacksaw. Of course you would need a new bolt.

After much messing about, research, cut hands and many a swear word I got it off.

In the UK (where I'm from) something was recommended to me on another forum called Plus Gas. It's a penetration fluid, like WD40, but better. It's thicker and stays around much longer than WD40. I sprayed this on the hinge of the bracket and started to pull it back and forth. It was still a bit stiff but was moving more freely until I hit the bolt with a hammer. The alternator then became very loose. What I then noticed was the bolt was stuck in the alternator itself.

I bought some six sided sockets and started to pull the ratchet towards me and push the alternator away from me (to help the movement). I did this for 30 minutes and didn't make much progress. Out of frustration I started hammering the bolt again, but I noticed that the bolt was actually moving. So I slammed it a few more times until it was flush with the bracket. I still couldn't get the bolt out though!

I ended up buying a centre punch and took my lump hammer to it, and hammered the bolt all the way out of the alternator and bracket. The bolt has corroded fairly badly inside the alternator. It was also slightly bent.

The crux of the situation though is that this bolt was fitted incorrectly by the previous owner (or their mechanic to be fair). The head of the bolt should have faced away from the engine, not towards it. However on reflection I'm not sure whether I'd have had a worse time removing the bolt if it was fitted properly.

But yeah, Plus Gas (or 50/50 mix of Acetone and ATF fluid), a centre punch and a lump hammer. That's what you need to remove an alternator from this car!

Not the answer you're looking for? Browse other questions tagged toyota alternator or ask your own question.

4
What is the correct/factory wiring for a Suburban 1998 battery/alternator?
4
How to loosen drive belt tensioner on 2007 Toyota Corolla?
7
DIY Alternator Belt Tensioner
3
1996 Toyota Avalon How to remove a dashboard?
3
Car stopped with battery warning light, battery tested fine and appears fine
3
'91 Toyota Celica GTR (ST183) charging diagnosis
1
How can I get my H.O. alternator to charge at 14.Xv?