Does coil rewinding have a negative impact with the existing system?

I have a question towards the rewinding of a coil.

Here is the tech spec of the bike:-

My bike comes with an electrical spec of DC (Indicator, Horn etc.) + AC (only Head Light).

Due to my recent changes in the electrical system, (in which I have made the head light from AC to DC, and changed light from 35/35W to 60/55W), when I turn on all of the systems, I am consuming 10+ Amps of current.

When drawing a full load continuously for 10 seconds I am having some problems with the output of the horn. It is producing a low sound. When I have used the horn normally with out a full load, then it is working fine.

Here are my questions

1. If I have upgraded the coil winding to supply more current or power, will my rectifier be negatively effected by this?

2. Will the battery be damaged or become weak if I have supplied more power to it?

3. I have heard that coil rewinding will change some ignition timing. Is it that true?

4. Do I need to change a fuse, since only a 10A fuse is mentioned in my bike. Will it get fused if more current comes? Is there any way to deal with this?

5. The existing alternator is generating only 100/12 = 8.33 Amps, in which my existing battery is stated to give 9Amps. Is there any particular reason, Why the factory supplied alternator is supposed to give less Ampserage?

[PS: I am not interested, in changing the light back to 35W.]

For more clarity and info , I have also uploaded the snap of the bike hand book catalog 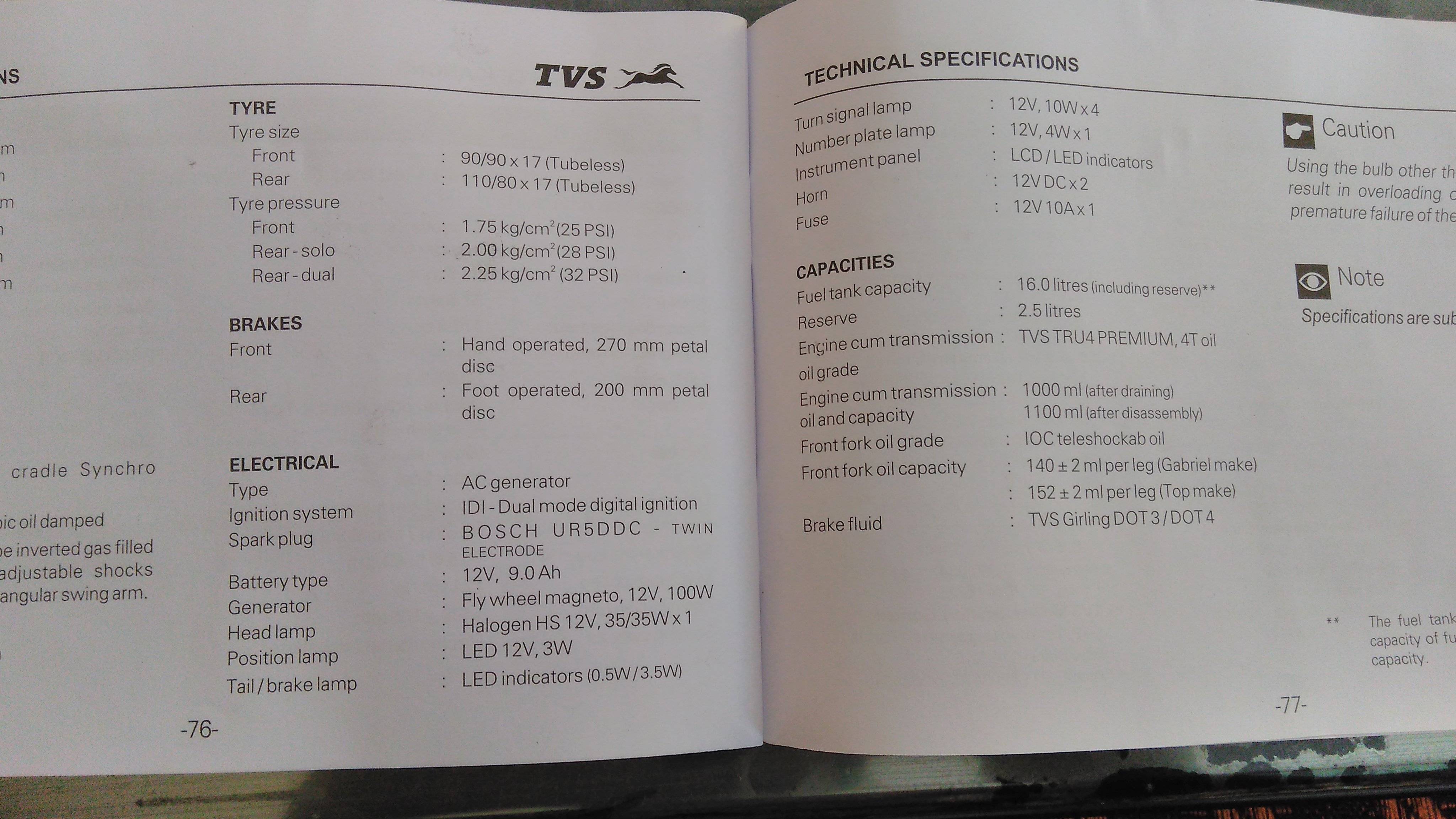 May I kindly know, how can I solve this situation and is there any alternative for it?

Firstly, please add more information: What is to make and model of you bike? What are the exact modifications you've done (with spec of the components)?

Now, when you say "under full load" I assume that you mean with all optional electrical system on and at full settings (like with the high beam on). If that's what you mean, then your horn will function quietly/low because another part of the system is drawing too much amperage and your horn, therefore, can't get the energy it needs to fully function.

Now consider, if your old headlight was AC, and you used a rectifier to make the new on DC, then rectifier is adding new resistance, and thus amp draw, of that line. Now also you've upped your headlight from 35w/35w (2.9A/2.9A) to 60w/55w (5A/4.6A). So just based on the new lamp, you're drawing 9.6A on the headlight alone! That's a lot more that the 5.8A that was factory.

So, for your questions:

If I have upgraded the coil winding, to supply more current/power, then whether, my Rectifier can withstand?

This depends on the specs of your rectifier.

Battery will damage/become weak if I have supplied more power to it?

Modifying your recharge system could severely damage your battery if not done correctly, and could risk causing a battery explosion. Minimally, it's likely to reduce the life of the battery somewhat. The reason the stock system will be lower amperage than the battery is to have more of a "trickle" effect. This is a better way to recharge in terms of health. Allowing too rapid a charge (I.e. Higher amperage) will cause the battery to get hotter. In many cases this won't be an issue, but when your battery starts to get old this will become increasingly risky as it won't hold full charge and will draw more from your recharge system.

And also I have heared that, coil rewinding will change some ignition timing, Is it so?

Do I need to change the Fuse, since only 10A fuse is mentioned in my bike. Will it get fused if more current comes? Is there any way to deal with this?

This why is we need the make/model info. I have no idea where this fuse is that you're talking about, but there has to be more than one. To facilitate your current configuration, you will have to up the fuse - however - doing this can create a serious risk to all other components on the same fused circuit or section!!! The fuse is there to protect items from getting too much juice, so increasing the fuse rating to allow for a brighter headlight will also mean that other items (possibly your horn, blinkers, tail/brake light etc.) at greater risk of overload as well.

But the existing alternator is generating only 100/12 = 8.33 Amps, in which my existing battery is stated to give 9Amps. Is there any safety/particular reason, Why the factory packed alternator is supposed to give the less Amps. As I mentioned above, it's partly because of health and safety for your battery and other parts, but also for simplicity. If your whole electrical system will function on < 10A, why would they give more? Also, what do your mean by 100/12 = 8.33 Amp?

After looking at your specs a bit, I'd say to get something like this LED H4 headlight. The overall power use is 42W combined, so you'd drop below your stock usages. Which would mean that you bike is now producing more than is needed. This would be a savings of ~73W overall (though my math method could be wrong).

Rewinding the coils is a lot of work, is not easy to do, and the problem is solved more easily by reducing your overall consumption. That said, one of the main points of concern that I've seen in other thread regarding increasing lamp brightness, is the melting of conductors (wires) and light socket/boot. This is because a higher brightness light (especially true with Halogen and HID lights) will produce much more heat. Under worse-case-scenario conditions this could result in a fire because of burning the insulators or other plastic parts. So, not only would you have to re-wind your coils, but you'd also have to redo a good bit of wiring to be safe.

NOTE: I have no practical experience with LED headlights, nor am I recommending the above lamp over any others! It is also very important that you check what your local laws are regarding headlight colors and brightness. This may not be a concern wherever you are, but is some locals there are strict regulations on it and you can (and possibly will) get ticketed for it.

Also, I Googled "halogen HS 12v 35/35 light" and the results indicated a 12VDC lamp... are you sure that you were actually getting AC at the light before? Or did you assume that because "generator" output AC that it was getting AC at the lamp? From my understanding the vast majority of the electrical system has a stock rectifier between it and the stator... even alternators to my understanding often have a rectifier built into them so that the unit outputs DC voltage.

TL;DR – the headlight may have put your system out of balance by enough that your battery can't make up for the additional load and the alternator is always playing catch up. If you have a way to do it, measure the current in/out of the battery. It should be zero or positive with normal loads. But, what is suspect is that the wiring is too small – especially the main feed to the distribution point. Horns are often very high current devices and it is quite possible that with your loads there just isn't enough capacity to supply the horn's need for current. In that case there are a couple of things that you could try:

Batteries are rated in Volts (V), Amp hours (Ah), and some measure of their ability to deliver current (CCA or cold cranking Amps is one such measure). Amp hours are a measure of the battery's capacity – the size of its fuel tank if you will. CCA and the like are a measure of the battery's ability to deliver current. If you like water analogies, you might think of CCA as a measure of how big a hose the battery can keep flowing. A typical (from memory) battery might be rated at 12 V, 40 Ah, and 400 CCA. So, in theory this battery could deliver 1 Amp (A) for 40 hours, or 40 A for 1 hour, or 400 A for 6 minutes – in practice you'll find that other factors come into play, but that gives you the basic idea.

Wires are there to deliver the power from the battery and/or alternator. If the loads are large, the wires may not be big enough to handle the current demanded and they will start to heat up and they will also "fail to deliver" – the resistance of the wire will hold down the current that is available to the load, much the way a small hose will not be able to deliver as much water as a larger hose could.

The job of the fuse is to protect the wires, and maybe the alternator, from damage due to an overload or a short circuit. The rating of the fuse is based on the size of the wires and the type of insulation they have. Wires heat up as the current through them increases and this damages the insulation. Most fuses work by melting and opening the circuit if they are carrying too much current. This takes some time, so brief overloads will be tolerated. The larger the overload, the faster the fuse will blow.

The role of the alternator is to provide for at least the average electrical draw plus enough reserve to make up for system losses and to recharge the battery.

Batteries wear out. If yours is of unknown age/condition it would be worth having it checked out.

Not the answer you're looking for? Browse other questions tagged electrical motorcycle battery alternator rectifier or ask your own question.

4
Second battery for Android Stereo
5
Dash Lights and Headlight Angle Adjust Stop Working
10
Why do attempts to charge a flat car battery with an electronic battery pack give results as if there's a short circuit?
2
Draw more current than its original ouput
4
Suzuki Marauder gz125 fried wiring on ignition/starter circuit
3
Why do some cars have battery under the trunk?
3
Safe rounding of CCA during battery load testing
2
Why do we use a relay and switch to control on/off of horn circuit instead of using a simple swtich?
4
My 2011 Kawasaki vulcan has absolutely no power to anything electrical ..,
1
Classic motorcycle buck converter 12vdc to 6vdc