Why do Internal Combustion Engines have specific "Firing Orders"?

What's the point of having a firing order? I read that it helps balance out the power so as not to be too much on one side if the crankshaft, but why do we have such a specific order? If that was the case could I have the firing order in a 4 cylinder engine be 1-4-2-3

There's a huge wiki about Firing Order which contains a vast number of workable arrangements, even across the exact same cylinder configuration.

To answer your specific question, firing order is usually decided to minimize potentially destructive vibrations and mechanical forces that would result if the torque pulses on the crankshaft throws were to harmonize. A similar note is that you will always find engines with a number of cylinders that is evenly divisible into 360 degrees of crankshaft rotation. 4,5,6,8,10,12 are all fine. 7,11 and 13 are not. The exact explanation is beyond me, but it has to do with vibrations and orders of harmonics in combination slider-crank mechanisms.

It depends if you are asking from the point of view of an engine designer or someone trying to maintain or troubleshoot an engine.

From the point of view of a mechanic firing order tells you the order in which the cylinders are ready to fire – when each one is on its compression stroke with the valves closed and a charge of fuel. That's important if you're hooking up spark plug wires (or fuel injector lines on a diesel with a separate pump) or trying to diagnose a rough running engine or one that won't start.

From the point of view of an engine designer, I suspect that, some of the considerations are around concerns like you mentioned – managing stresses and vibrations and maybe also trying to do that without surprising the folks who will work on the engine later.

In answer to your question about other orders, I think – in theory at least, that the designer can have any order s/he wants. The mechanic on the other hand has to follow the order that was designed into the engine.

Firing order is constrained by:

These two factors will combine to determine when top-dead center (TDC) of each cylinder is achieved with respect to crank angle.

Ideally, the firing order is set up to make the ignition occur as regularly as possible.

Here is an animation of a regular flat-plane inline-four: 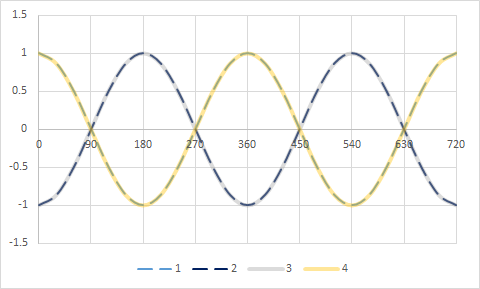 Adding in stars to denote ignition events, it should become obvious why we are limited to what we can use as a firing order. A 1-4-2-3 firing order is infeasible because there is a TDC for #2 and #3 between those of #1 and #4: 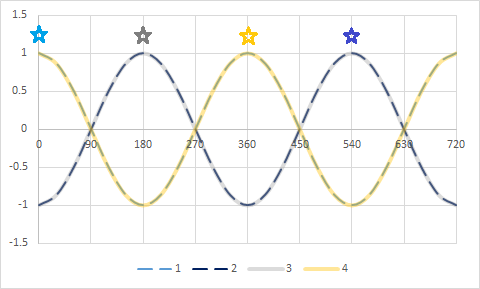 Here, there are only two options for firing order:

Whenever multiple firing orders are possible, engineers will look to other factors, among which are engine balance, vibrations and harmonics that other answers here have alluded to.

Not the answer you're looking for? Browse other questions tagged engine engine-theory firing-order or ask your own question.

8
why do engines have so much unused horsepower?
8
What's involved in getting a piston engine to spin the other way?
11
Why don't all diesel engines have throttle plates?
6
Is there any benefit in performing a 4/7 swap on an LS engine?
6
Can a modified or non-fixed firing order yield a racing advantage?
4
I3 engine balance/power delivery
5
Do 3 and 5 cylinder engines have uneven power delivery?
34
Why do manufacturers detune engines?
4
Why is there no 1-4-2-3 Firing order?