So I'm on the road right now (or was, when I wrote this) having an issue that started a few days ago and I'm trying to diagnose it. I am not sure what info is relevant, it does feel like more than one problem.

I have a 2001 Honda Prelude SH. For the past few months it's had a slowish (.5-1 qt per week) oil leak out the lower timing belt cover, which from the service diagrams I can only assume is a worn out seal on the crank or cam shafts. I've had some success stopping it with lucasoil oil stabilizer.

About 2 days ago while idling with the AC running it started oscillating between about 400-1100 rpms (normal is ~800-900). First every 20 seconds or so then gradually increasing frequency over the course of 30 minutes until it was every few seconds, blowing gray smoke, and eventually stalled out. Also there were about a dozen small black specks on the ground behind the exhaust pipe. Here's its final moments:

At this point I could no longer start the car. It would turn over but wouldn't start. I checked the oil, it was a little low but not critical. I noticed a larger than usual puddle on the ground.

When this happened the check engine light came on and I read P0170 (fuel trim bank error).

I looked it up, found some similar stories that identified the air pressure sensor as the issue. I took another vehicle out, replaced the map sensor and the air filter.

It looked like it solved the issue, but I let the car idle (no AC or fans on), came back about an hour later and found it stalled.

I put it aside until today.

Today, I started the car and drove it. It ran all right for a while. Suddenly the following happened all at once:

I pulled over, stalled, got it started after some trouble, stalled again.

Opened hood, a medium amount of smoke coming off engine block and a lot of heat, I cant locate source of smoke. Oil looks a bit low. There was smoke coming off the oil on the end of the dipstick.

Read error code as P0177 ECT sensor low input. Looked it up, it said this is thrown when coolant temp is reported 300F or higher. Said most common cause was wiring but the smoke and heat makes me think its correct. I read coolant temp at 309F. Cooled to about 290 after 15-20 minutes of sitting there. Now at about 201, so those readings do seem reasonable to me and not like a sensor malfunction.

I fixed a coolant leak and refilled the radiator about 5 months ago. I have not seen and do not currently see any coolant leaking.

Some other info from comments, etc.:

Currently I am sitting at a gas station waiting for the engine to cool so I can test the ect sensor and check the levels, but I'm out of ideas. The engine confuses me a little because of how heavily computer controlled it is.

Does anybody have any ideas, or know anything else I can check? I only have minimal tools with me (sockets, some screw drivers, a multimeter and some other basic stuff).

Once the engine cooled I checked the coolant. It was bone dry. I couldn't open the reserve tank or check its level because of the damaged cap. The radiator capacity is 3.3L and I put about 3.2L back in. I bled the air, all seemed fine. All the other weird issues I'm assuming were the result of a severely overheated engine.

I drove it about 170 miles with no issue (it was running quite well actually, I think the MAP sensor replacement was a long time coming anyways). I even idled for about 30 minutes in the middle of the trip, AC on. Everything seemed OK. The coolant temperature held in the 190-200F range.

About a mile before my house the temperature gauge shot up suddenly and quickly, and the weird behaviors started again, as well as the burning smell. I put the heater on, the air was extremely hot. I guided it home gently without exceeding 250 F. Once it cooled in my driveway I opened the radiator cap and it seems dry again. I'm out of coolant right now so haven't refilled it yet but I suspect it's empty. I see no puddles on the ground and no liquid coolant anywhere under the hood.

I found http://community.cartalk.com/discussion/2297412/radiator-fluid-disappearing-like-a-magic-trick, the working theories there are blown head gasket, cracked cylinder head, or a leaky heater core. My exhaust is clear which I assume (and hope) means that I'm not burning coolant in the engine, so maybe it's the core or somewhere else in the system. Maybe it's evaporating out the broken seals? Can it do that? In any case, it seems to rule out the theory of a very slow leak, I lost > 3L of coolant in < 200 miles.

I really want to check the reserve tank but I can't get the cap off, can't see the level externally, and don't want to cut the hose and rip it out completely until I can get a replacement cap (the damage to the cap is in the joint where the hose connects, so I cannot unscrew the cap).

I finally got a chance to investigate more and figured it out.

After letting it cool during the initial trip, I was able to check the coolant, and it was bone dry. I added about 3.2 liters to the 3.3 liter capacity radiator. I noticed the seal of the reserve tank was damaged, and the radiator cap seal was falling apart as well.

I refilled the radiator and bled the air out, and drove for a good 45 minutes with no issues and no visible leaks; the car seems to be back to its normal self with the coolant holding steady around 190-200 F.

I then drove 170 miles with no visible issue, even stopped and idled for about half an hour in the middle, and about a mile before my house I smelled the burning smell again and the coolant temp spiked very suddenly. I made it home at least and kept it under 250F. I checked the coolant and it was completely empty again.

I followed Ben's advice from the comments, picked up some UV dye and ran it through, and immediately found that coolant was leaking heavily from the damaged reserve tank cap (the damage was to the rotating part of the cap where the hose connects, which in turn was forcing the cap to become unscrewed a bit and not make a good seal). Here's some shots from above and underneath: 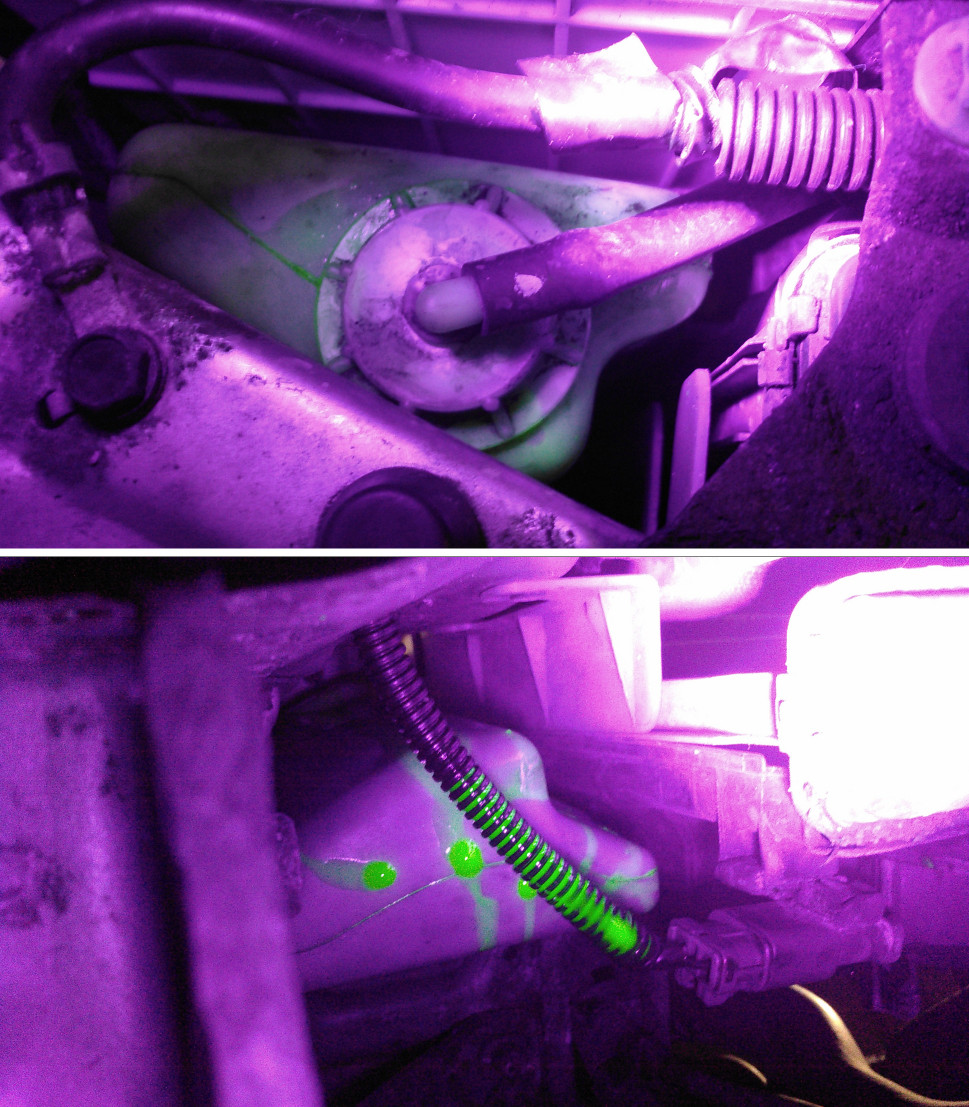 Some reasons I didn't notice the leak initially (guess I lied about no puddles) and some troubleshooting lessons learned:

Anyways I ordered a new reserve tank, cap, hoses, and a radiator cap as well. The good news is it's not nearly as big of a pain as replacing the heater core, and doesn't require a trip to the dealer.

To be sure I also drained the oil and pulled the filter and checked for coolant mixed in and it's totally clean, so that's also good news.

All the other issues seem to have just been indirect results of a severely overheated engine, although as far as the MAP sensor goes I can't say for sure if it was on its way out anyways or if that was another symptom. I'm overdue for a timing belt change anyways, so it's a good opportunity to inspect the cylinder heads and such for damage while the engine's apart.

11
Why would there be transmission fluid in the water overflow reservoir?
6
Radiator has a leak and the upper hose is clogged, car does not overheat. White smoke from upper hose
5
1992 Honda Accord overheating issues
1
What is wrong with my Overheating Civic? [Pictures]
4
Diagnosing a blown head gasket - can I use a compression gauge?
0
04 Forester Coolant system overheating