How to determine exactly what's wrong with my alternator?

I did a little test where it I turned on the bright lights, AC, radio, rear defogger and opened the trunk so the light came on.

At idle, my idle dropped from 750 to about 650, and the whole car was shaking. I made the following measurements with a clamp meter and a voltmeter:

By contrast, my 1.6L Nissan Almera which also has an 80 amp rated alternator had no problem putting out 57.7 amps @ 14.05 volts idling at 950 rpm without drawing anything from the battery.

I just ran across some contradictory information. Here is the tag on my alternator: 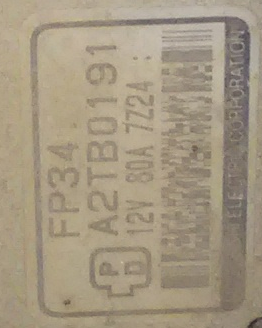 Alternators with P-D Field Control Unit These types of Alternator do not have a traditional Regulators but instead have a field control Unit. Mitsubishi & Hitachi Alternators with P-D Regulators require special testing, the voltage control & warning lamp functions are in the vehicle PCM (Computer). * P Terminal is Stator Phase & is a direct connection to stator AC Volts. This allows the PCM to Monitor Alternator Field. * D Terminal is Driver connected to Vehicle PCM (Computer), and is used to control the output of the field control unit by varying base current on a transistor which in turn varies field current thereby controlling Alternator output and voltage. These Alternators cannot be tested in the traditional manner without dedicated testing equipment. Connecting battery voltage to the “D” terminal will destroy the unit.

OK, together with the above info and what's in the 97 European WSM I was able to figure out what's going on I think:

So basically, the ECU is doing the voltage regulation, and if it's working correctly I should see a value close to 2 volts on the D pin when I turn on as many electrical loads as I can. The above numbers are for 20*C, so since my engine was already hot my numbers can be expected to be a tad bit higher. So I stuck a safety pin in the back of the connector and hooked my multimeter up to it. Idling at 750 rpm with just the trunk light on I got 0.85 volts on the D pin. On the P pin I saw about 3.99 volts. Then I turned all the same loads I used when checking amperage and the D pin went up to 2.2 volts, sometimes jumping momentarily to 2.5 volts. The P pin went down to 3.75 volts, and as I watched it was steadily dropping. I assume this is because the alternator couldn't keep up, even though the ECU was basically full fielding it. I then raised the rpms to about 2600 and saw the same thing on the D pin, but now the P pin was steady at about 3.99 volt.

Basically, if I understand correctly, based on the P pin output of 4 volts at full field at 2600rpm, the alternator is only outputting about exactly half it's maximum output.

So what does this sound like to you guys, the stator or the diodes in the rectifier? I don't think it's the brushes because exactly half max output is too steady and neat of a number, but that's just kind of a hunch / guess.

So based on the above I made an educated guess that it's the rectifier, so I ordered one a few days ago and hopefully it'll arrive in a week or two. I couldn't find any parts for the Mitsubishi A2TB0191, however it seems like the A2TB0091 uses the same internal parts so that's what I ordered.

So after separating the two halves of the alternator, and showing it to a guy who rebuilds alternators he said the stator looked like it was burnt and that maybe the field control unit might be bad also. Of course he only looked at it, although I have to say all the internal components do look burnt to my amateur eye and not just dirty: 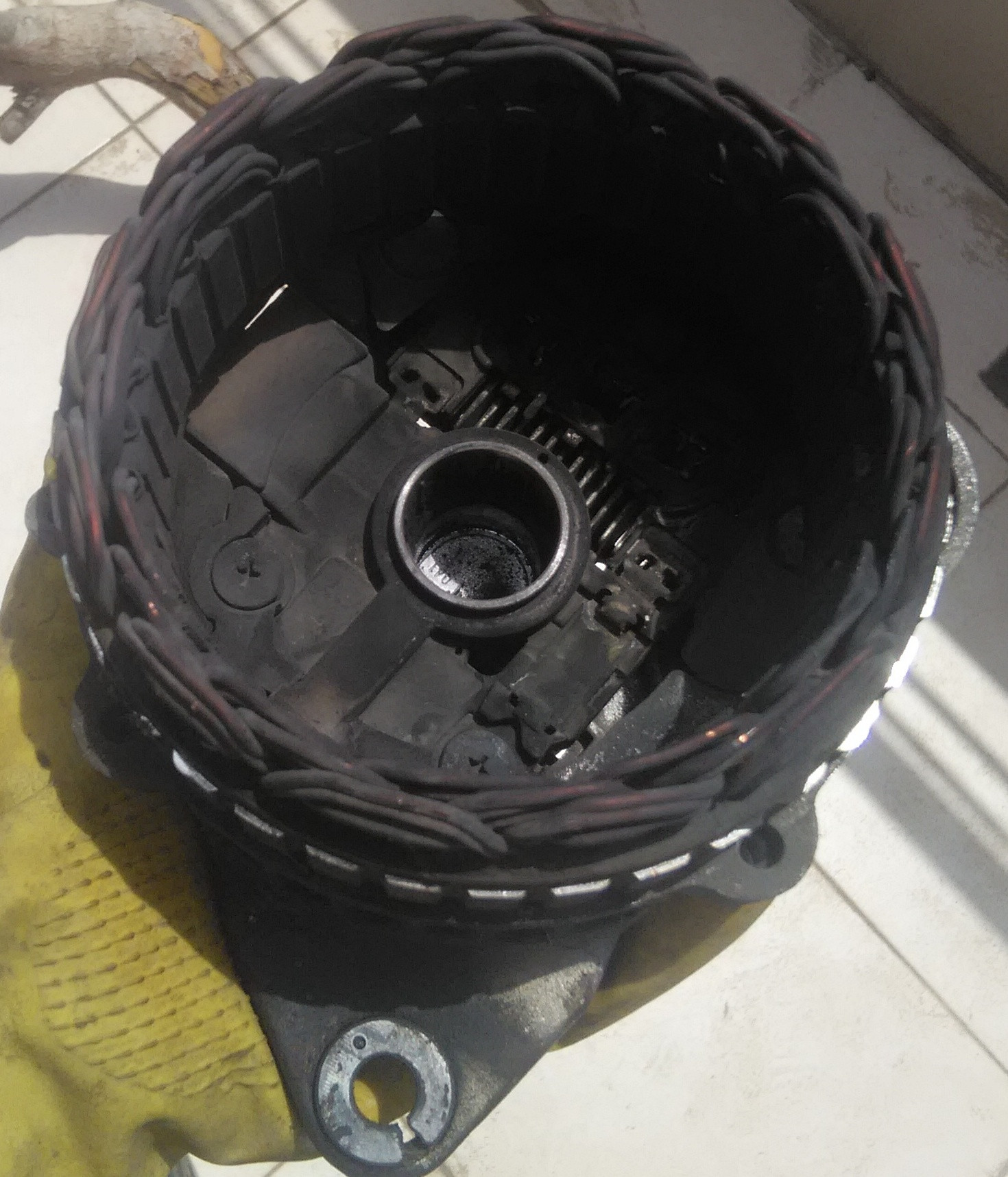 I also noticed a number of nicks and cracks in the insulation of the stator wires like this one: 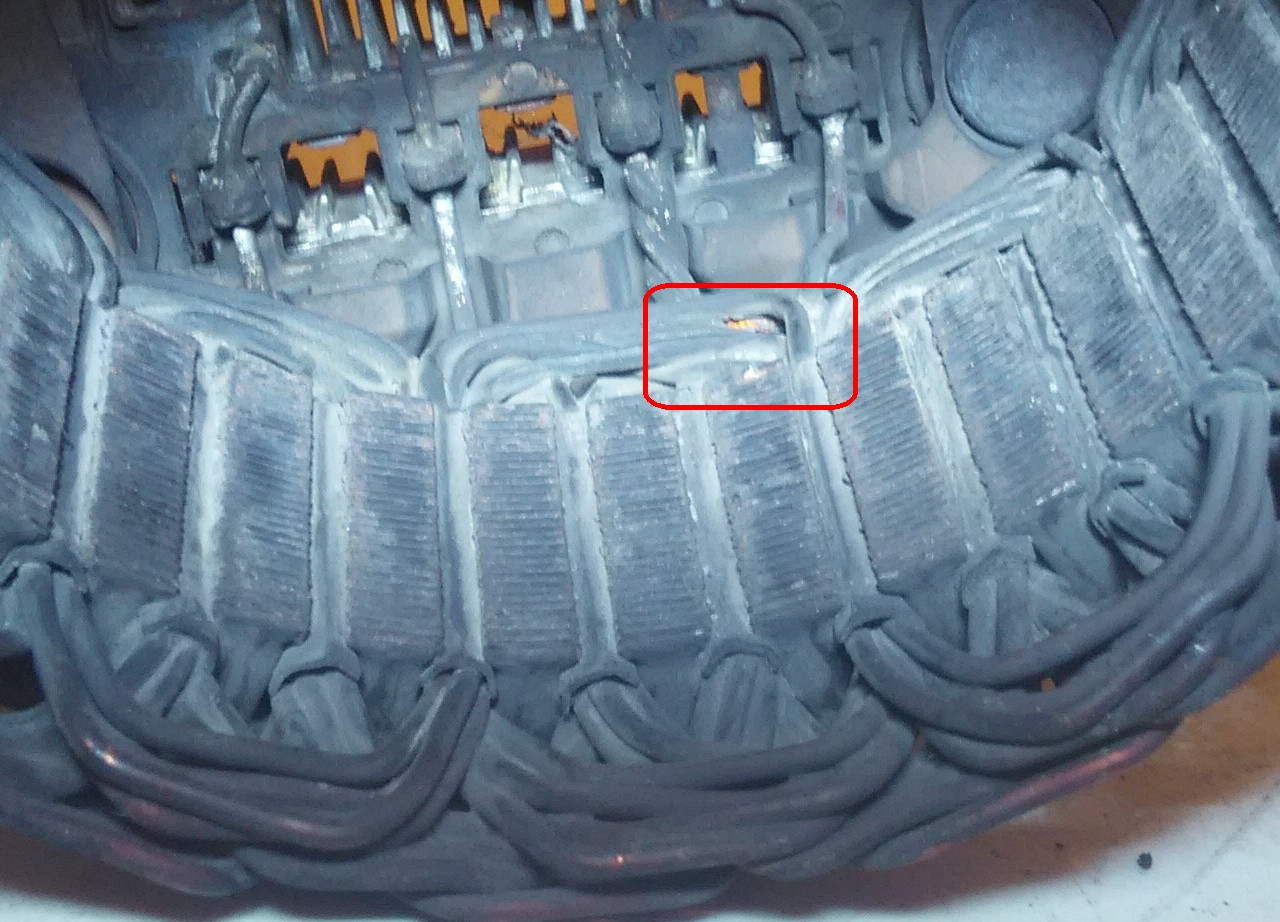 Now it quite possible that I caused these nicks and cracks in the process of disassembling the alternator, but the I was pretty careful I thought and it would seem the insulation isn't it such great condition if it chips off so easily.

So anyways, since the stator is toast ( literally ) I'm just going to grab an alternator either from the junkyard or look into a rebuilt one.

Here's one more pick showing the back of the field control unit and the rectifier: 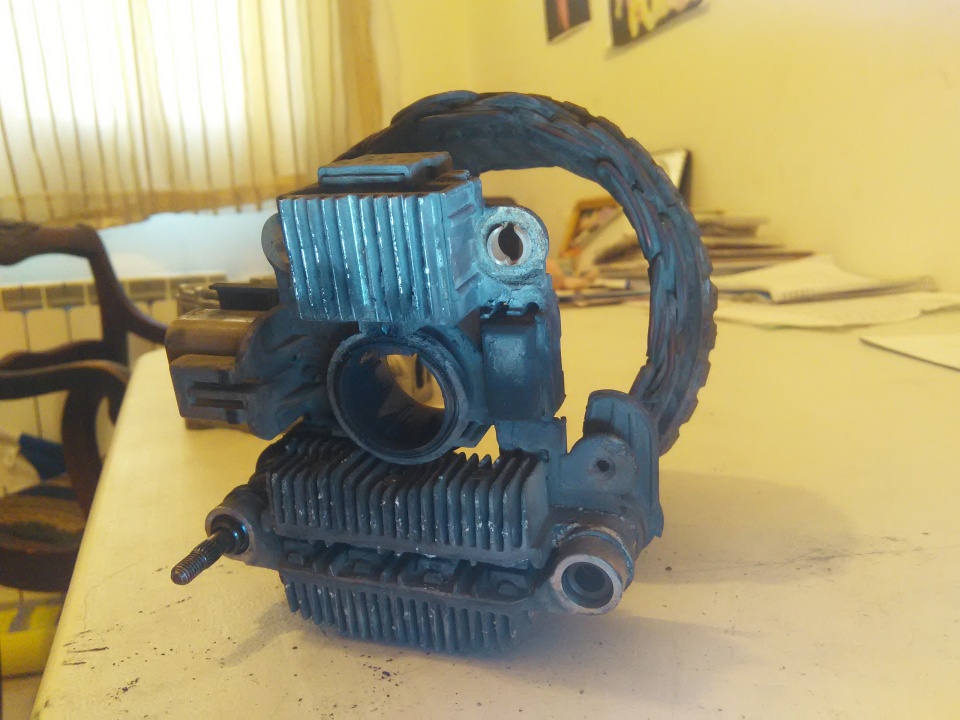 I did try to clean the stator with some carb cleaner, but it didn't really seem to make much of a difference. Anyways, I'm going to chalk this up to a burnt rotor, unless anyone has a better guess.

This sounds more like a brush problem to me. The diode test information sounds like they are fine. If the brushes are worn and not making solid contact with the armature the alternator cannot produce the amperage needed.

8
Battery Light Won't Go Off Since Changing Battery
4
The Testing Procedure for the Mazda 626 Alternator in the WSM is Unclear
8
Rough idle only under load
3
Are my alternator brushes too short and what problems do short brushes cause?
3
98 Mazda 626 with Intermitant Stall and Restart Problem
2
Turning on Loads caused an Increase in Alternator Base Voltage

4
The Testing Procedure for the Mazda 626 Alternator in the WSM is Unclear
3
Are my alternator brushes too short and what problems do short brushes cause?
4
Stator and Rotor vs Magneto
6
What happens if I disconnect the battery while the car is running?
6
Replace or Repair Mazda MPV 2000 faulty ECU?
3
Room Fuse and P1632 on a 98 Mazda 626 GF ( European )
0
Alternator / Regulator / Battery issue with Yamaha XJ 600