The driver side front inside door handle and lock tab are not working on a 1998 Ford Contour LX I'm working on. There is no tension on either part. The only way to lock the door is from the outside with a key. The driver is rolling down the window to let themselves out by using the outside handle. The windows are manual and so are the door locks.

What's broke and how do I get at it and fix it?

It's the control cable (#10) that runs from the door handle / lock tab to the latch/lock assembly. It's discontinued, not a single one in dealer inventory in the entire United States. Vintage Parts does not have any either. I ended up grabbing one off of a wreck at the local Pick-n-Pull .

Getting to it involves removing the door panel. Remove the screws around the perimeter of the panel (front, back and bottom). If the windows are manual, the crank handle has to come off (see Broken window crank handle). There is a trim piece (#5) held on by a screw under a cover. You'll need a tiny common screwdriver to get the cover off. There are two screws under a trim piece on the door handle (The one you grab when pulling the door shut. That tiny screwdriver will come in handy again here). The panel should come up and then out, leaving a foam cover. Use a razor blade around the edges to remove it without tearing. You'll probably have to take the speaker out to avoid tearing the foam (remove three screws, undo the wiring connector).

Now comes the really fun part. You've got to get one end of the cable loose from the interior door handle (The one you use to release the lock/latch, #4), and the other end loose from the lock/latch. There is a small cylinder at each end of the cable. It comes out vertically on the door handle and horizontally at the lock / latch. There is a plastic shield that you have to remove from the lock/latch mechanism to access that end of the cable. Feel for a bolt near the end of the cable, the cover is held on that by some teeth. You can pry it off with a screwdriver inserted between the clip holding on the cable cover at that end. The annoying part is rotating the cylinder at each end so it will come free. This is pretty easy at the door handle end, just move the handle / lock tab until the cable lines up with the gap in the retainer it's sitting in. Use that small screwdriver again. At the lock/latch end, this is really really annoying, since the gap is at 12 'o clock and the cable is coming out of a slit in the side at 3 'o clock. Getting the cable off is easier since you're not worried about breaking anything. Getting the new one back on will be harder since you're worried about breaking the cable. Grab the piece of plastic the cable goes into and pull it toward the front of the door with one hand while you try and rotate the cable into the gap so you can remove it. Ugh.

I'll try and take some pictures before I put the door panel back on.

I took some crappy photos before putting the panel back on. Here's a picture of the door with all the interior trim removed. You can see the cable running from the handle to the lock/latch mechanism. Well, actually, you're seeing the shield the cable runs through. 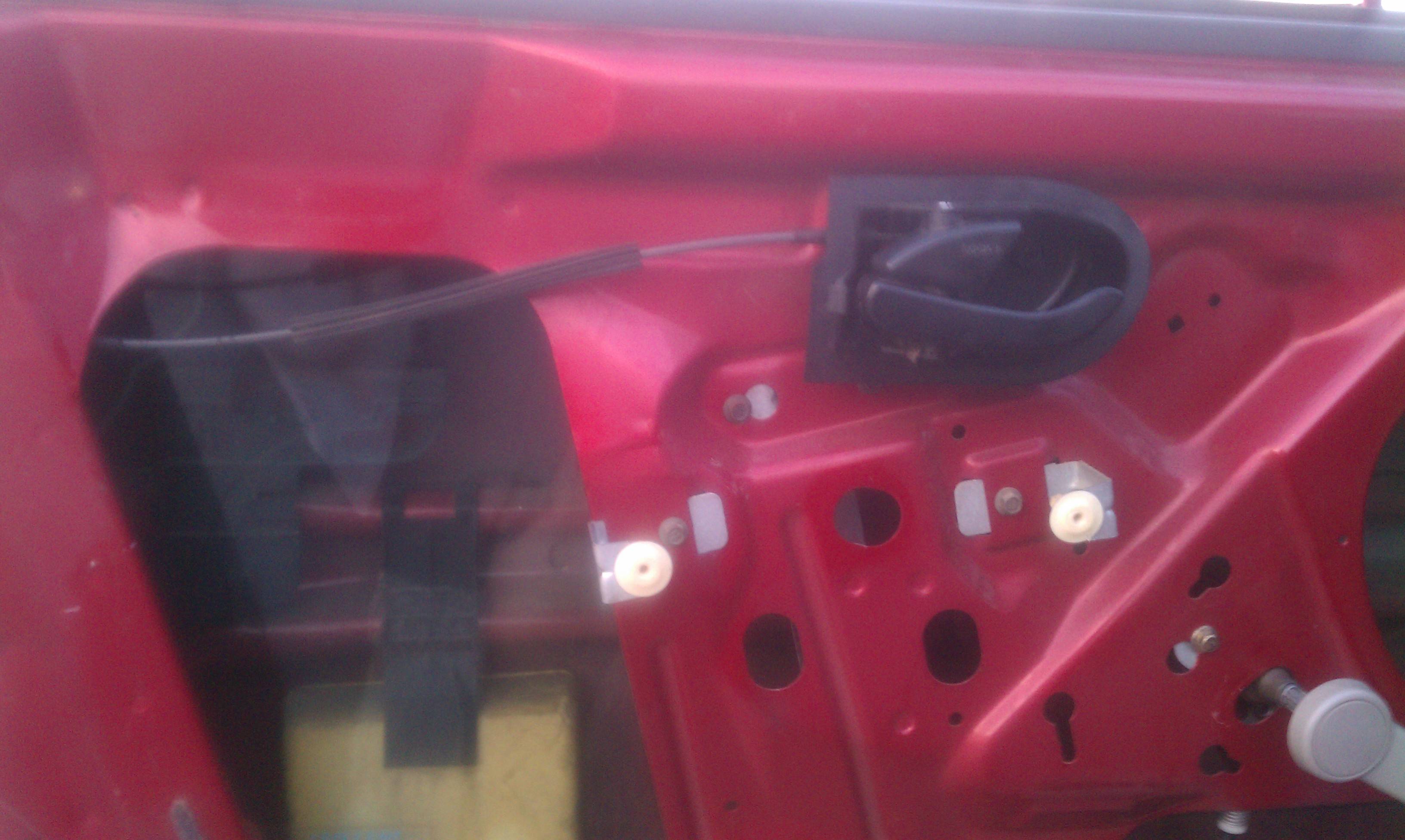 Not the answer you're looking for? Browse other questions tagged ford locks door contour cdw27 or ask your own question.

1
Broken window crank handle
1
Dust is coming into my Ford Contour 1998 2.5L when the window is closed

1
Broken window crank handle
1
Dust is coming into my Ford Contour 1998 2.5L when the window is closed
5
Suzuki Esteem door repair
3
Nissan door does not open from outside
3
Auto door lock does not work with automatic transmission shifting to and from “Park”
4
2006 Hummer H3 - Driver side window and Door Lock not responding
4
How to replace the door lock relay on Honda CRV 2005
2
vw fox unlocking door by key opens window