Could Hydrogen Be Used as a Fuel?

I understand that it may be easier/cheaper to us fossil fuel but hypothetically could hydrogen gas be effective as a fossil fuel replacement for internal Combustion Engines? Would we need to care more of it and or use more of it during the combustion stage?

P.S I'm not using hydrogen gas as a fuel just wanted to know if its possible.

You can use hydrogen gas, yes. The main problem is that it is not easy to make.

Most hydrogen (about 95% of all hydrogen used today) is produced by partial oxidation of methane and coal gasification, with some from biomass gasification.

So, yes, you can use anything that combusts to drive a combustion engine (although it would need to be re-engineered to fit the combustion profile of hydrogen - speed of combustion, temperatures etc are different) but you wouldn't do it this way as it is less efficient than hydrogen fuel cells, and too expensive/difficult.

Hydrogen is an ideal gas to be used for combustion, as there are no harmful emissions byproducts if the combustion (combination of hydrogen and oxygen) is at the proper ratio. You just make pure water, which is fine.

The engineering challenge consists of how to transport, refuel, and safely carry large amounts of compressed hydrogen in the vehicle "fuel" tank. Someday this may be possible, but it is quite difficult. The Hindenburg disaster has forever made clear the hazards of large amounts of highly flammable hydrogen in a vehicle. (Although that hydrogen was used to create a lighter-than-air vehicle, not INTENDED for combustion.) That was in 1937, and almost 80 years later hydrogen is still just as flammable...

Hydrogen has been used as a fuel in various experiments. The largest-scale experiment I'm aware of is the BMW Hydrogen 7, a 7-series V12 produced from 2005-2007. About 100 were built. This engine could be switched from gasoline to hydrogen.

The big challenge with hydrogen is storing it:

The hydrogen fuel is stored in a large, nearly 170 litre (45 gallon),[6] bi-layered and highly insulated tank that stores the fuel as liquid rather than as compressed gas, which BMW says offers 75% more energy per volume as a liquid than compressed gas at 700 bars of pressure.[7] The hydrogen tank’s insulation is under high vacuum in order to keep heat transfer to the hydrogen to a bare minimum, and is purportedly equivalent to a 17-metre (56 ft) thick wall of polystyrene Styrofoam.[8]

To stay a liquid, hydrogen must be super-cooled and maintained at cryogenic temperatures of, at warmest, −253 °C (−423.4 °F). When not using fuel, the Hydrogen 7’s hydrogen tank starts to warm and the hydrogen starts to vaporize. Once the tank’s internal pressure reaches 87 psi, at roughly 17 hours of non-use, the tank will safely vent the building pressure. Over 10–12 days, it will completely lose the contents of the tank because of this.[9]

The tank is large and heavy, and only a tiny fraction of its weight is fuel:

A third method is storage in a metal hydride. IIRC Mercedes experimented with that in the 1980s, but their fuel tank reportedly cost over $100,000 making it unpractical.

Performance also suffers when running on hydrogen. The conventional BMW V12 develops 327 kW. The hydrogen car was limited to 191 kW.

Yes but it would be impractical for Internal combustion engines. Though hydrogen has a very high energy density per kg, producing it, compressing it and storing it just to lose 70% of it's potential energy as heat losses makes little sense. This is why most hydrogen vehicles use fuel cells. Their higher efficiency (up to 60%) combined with the high efficiency of electric motors (up to 92%) is more viable. Even at this point however a diesel engine is still a more competitive option.

Could Hydrogen [gas] Be Used as a Fuel [for motor vehicles]?

François Isaac de Rivaz ... invented a hydrogen-powered internal combustion engine with electric ignition and described it in a French patent published in 1807

People continued to invent gas powered vehicles, in the second world war there was a brief revival. 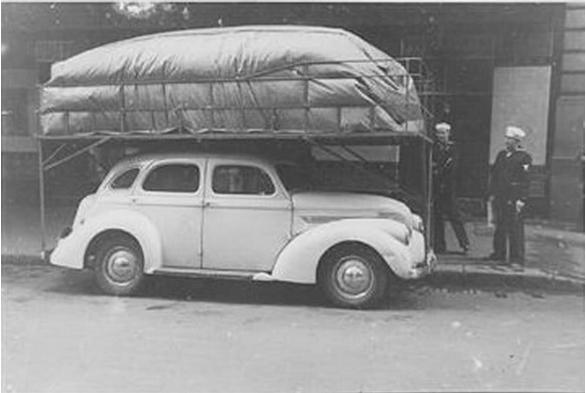 The vehicle pictured is using some gas other than hydrogen gas, but you can see the point I'm making.

15
Diesel vs Petrol motorcars. Pro's and cons?
6
Does the tachometer provide any indication of fuel usage?
6
Is it feasible to Turbo a NA engine while maintaining 87 AKI octane fuel use?
3
Slow acceleration, high fuel consumption after spark plug change
17
Can I use lower octane fuel at high elevation?
6
How can vehicles run on E?
1
Gas pedal floored yet the car can't reach maximum speed
3
Thinking of running E85 to clean my Corvette valves, pistons and heads