How is it advantageous for fuel management to detect negative mass air flow?

Here is the flow-voltage mapping for the Bosch sensor utilized by my E39 M5.

I find it curious that readings below 0.9 V correspond to negative flows. 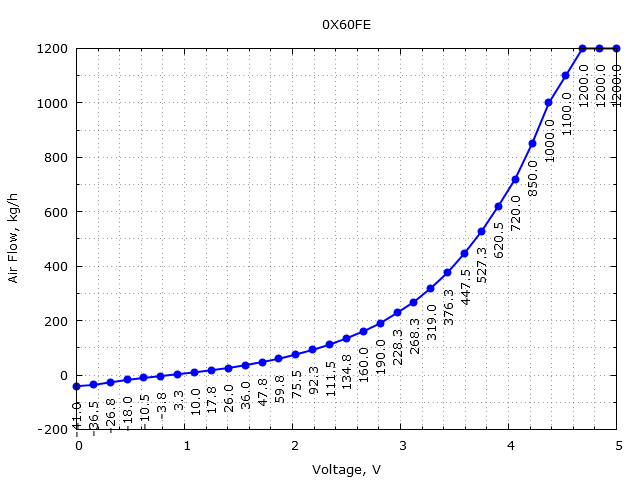 There is no such thing as detectable "reversion" airflow to a MAF. Especially on a non turbocharged car. The MAF has no clue about the direction of flow, only how much energy it takes to keep the wire or film heated.

I doubt that the "negative" aspect of your graph is ever seen. Even at idle, you shoud see 2-5 g/s. I wonder why the graph is kg/h... that seems like ugly units for a MAF that needs to respond instantly (hopefully). Potatos, Apples. Too lazy to convert. My pedantry, not yours.

Simply put, if your car is at idle, it must be using air. Snap closure of a throttle butterfly at speed might cause some backflow, but again a MAF has no idea about the direction. So this is meaningless. Without knowing the BMW E39 Engine Control Unit (ECU) maps, I am certain 0% Throttle Position Sensor (TPS) is a cell (or cells) on the ECU map. Cells which ignore all MAF information, <1.7v or not. Your IDC (injector duty cycle) should go to zero (no fuel injection). No air, no fuel.

The graph implies a scaling, but you should not assume that every point on the graph is obtainable in running conditions.

And everything I just typed is meaningless without tacit understanding of what the ECU does with this information. So to answer "why should fuel management care" I would say it probably doesn't. I would also say (again) that there is no such thing... google how hot film or hot wire works... there is no element of any type MAF (wire/film) that I am familiar with that senses direction of airflow.

And actually, this is the crux of the problem. MAFs are awesome, but limited. In a turbo application, even more so. The ultimate goal is to find the proper Air Fuel Ratio. But even that is wrong... we imagine a utopian sensor that would count free oxygen molecules (O2), not NOx or water, that we can use for go-fast combustion. It should be termed Oxygen/Fuel Ratio.(Even "fuel" isn't right; are we talking 91 or 93 pump, E85 (flexfuel/alchol)?? Gotta count every oxygen and every carbon) On a nice fast ride (actually anything), such a sensor doesn't exist--especially at 300-500 cfm. So whatever MAF technology the Bavarians in Munich decided to use, it's probably top-notch. I don't know where the graph came from, but "negative" airflow areas are not plausible. Show me a below 1.7v reading on your working MAF on your running E39 and I'll eat my hat. Yours too.

Not something to be concerned about.

On edit: Forget every single thing you just read. I am totally, utterly, completely wrong.

This is from Bosch MAF HFM5

If you look at the schematic you can see that the output signal operational amplifier is biased by multiple temperature-sensing resistors, in different places on the film. So it knows which part of the film cools first, in a way. It can sense the direction of slightly reversed airflow.

I've got hat sauce to pick out. As far as the "why", I can only speculate (gee, great track record so far Steve) that this MAF behavior might be useful in a turbocharged application. After eating much crow, I still stand by my assertion that there will be little to no reversion airflow on a Normally Aspirated engine.

On edit edit: A better [speculation] might be now you have capability for a closed loop electronic Idle Air Controller, able to deal with a wide range of operating conditions, yielding potentially lower idle emissions, even on an Open Loop cold start--which has traditionally been a very difficult task to do well.

Not the answer you're looking for? Browse other questions tagged engine-theory maf or ask your own question.

5
Why do modern PCMs prefer MAP over MAF

10
Mass Air Flow Expected Values
4
Calculating AFR using injector flow rate and mass air flow
6
Do worn brushes in an electric fuel pump increase fuel flow rate?
3
1996 Ford E350 (5.8L) Mass Air Flow Sensor - where is it?
29
We have fuel injection, why not air injection?
3
Does opening the throttle mean a leaner fuel to air mixture for starting?
14
Is it possible for a diesel engine computer to detect (and prevent) a runaway condition?
2
How is Intake Manifold flow measured?
1
IAT reading higher than ambient temp. Is that normal?
0
Mass Flow Sensor missing