After i bought it, i had check engine lights on, then i drove it to a mechanical shop few times and then they discovered that MAF sensor wiring has disconnected and they reconnected it. and light went off

but i replaced both AirFilter and MAF sensor (original sensor was 4pin but replaced one is a 5pin) and i asked mechanic to tune the engine, as there is nothing to tun in EFI... he cleaned the engine. and found spark plugs are covered with black smock due to driving with disconnected MAF sensor. and those were cleaned as well.

yersterday i brought car to Emission test and it failed. this is the report i got. 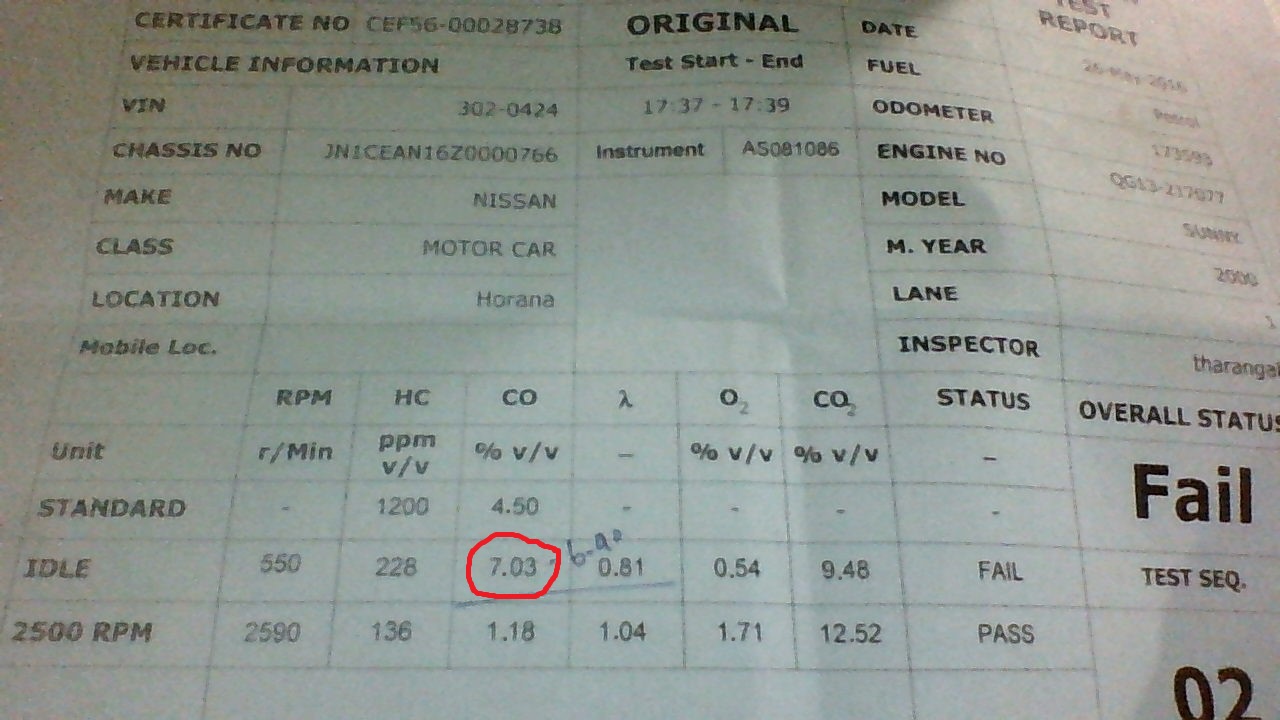 but previous report is ok, which have been taken one year ago by the first owner. bellow is it... 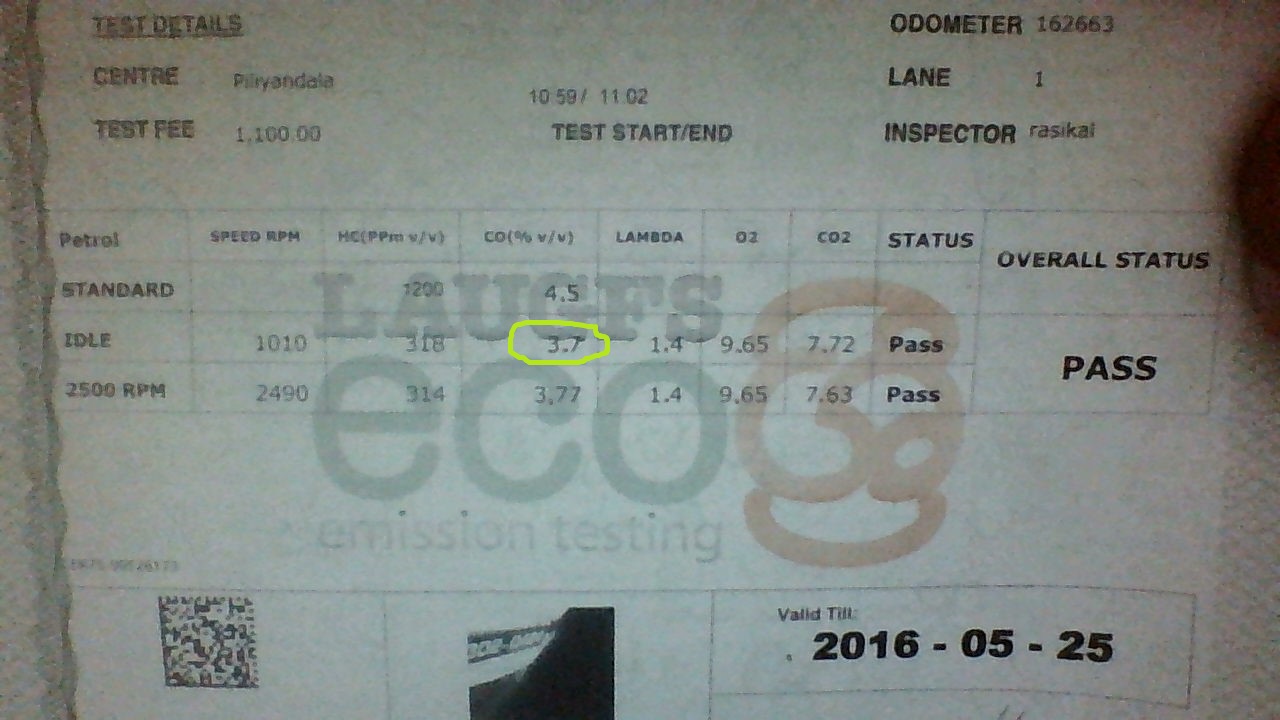 i have red circled the issue. CO emission is higer when engine is in IDLE, except it other things are ok. What could be the possible reasons ? How to pass from the test ?

(does my car model have O2 sensor?)

It sounds a lot to me like it could be your car's O2 (lambda) sensor in the exhaust.

Function of a lambda probe

Normally, the lifetime of an unheated sensor is about 30,000 to 50,000 miles (50,000 to 80,000 km). Heated sensor lifetime is typically 100,000 miles (160,000 km). Failure of an unheated sensor is usually caused by the buildup of soot on the ceramic element, which lengthens its response time and may cause total loss of ability to sense oxygen. For heated sensors, normal deposits are burned off during operation and failure occurs due to catalyst depletion. The probe then tends to report lean mixture, the ECU enriches the mixture, the exhaust gets rich with carbon monoxide and hydrocarbons, and the fuel economy worsens

It follows on perfectly, that with the MAF disconnected, the car has been running excessively rich (causing the deposits on the spark plugs) and also further downstream the lambda probe in the exhaust.

An overly rich mixture causes buildup of black powdery deposit on the probe. This may be caused by failure of the probe itself, or by a problem elsewhere in the fuel rationing system

The lambda probe is used by the ECU (along with other data) to provide adjustment to the fuel mixture. If your lamda probe is covered with sooty deposits it could be fooling the ECU to think the car is running lean. The ECU then (incorrectly) compensates.

I had an experience myself with a '96 Nissan Skyline GTS-t where the car was running very rich at idle and consuming noticeably more fuel than normal, it was resolved with a new sensor.

You may be lucky to find a replacement lambda sensor for $40ish.. on Ebay, you just need to know the exact Bosch part number that matches the genuine manufacturer OEM part. This can save you a lot, as O2 sensors from the dealer can be $200+

If you are unsure how long the lambda probe has been in the vehicle, it's a good idea to replace it regardless. It would probably end up saving you that in fuel even if it were not the reason for the excessive emissions. So at the very least, I think it's a great first place to start in resolving your issue.

I also am worried about the MAF having different # of wires. Messing around with the MAF or installing one with different behaviour could dramatically alter the information being provided to the ECU.. Was there a problem with the old one? It might be useful to keep the old one in case changing the MAF has had an effect.

Before suspecting a bad O2 sensor...

You need to be sure that the replacement MAF is suitable for your car.

You mention the replacement MAF is a 5-pin and not a 4-pin like the one originally on the car. If the new sensor has a different flow-voltage calibration this would go a long way to explain what you are seeing.

This is because the onboard fuel management is designed around a certain MAF sensor mapping, so it interprets a certain voltage as a certain air flow (e.g. 2.0 V = 50 kg/h). If the flow-voltage characteristic of the sensor changes, you would have to update the maps inside the ECU to maintain fuel control.

Here is an example map: 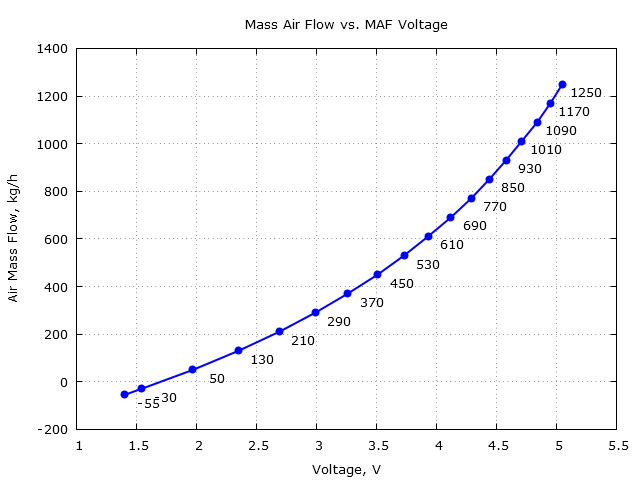 In answer to your last question, yes your car does have an o2 sensor, all modern cars do.

Here are a few tips to pass an emissions test

In addition you should pull the codes to see if there are any faults with the fuel delivery, o2 sensors, air flow etc. Typically bad emissions are due to an incorrect mixture of air and fuel. As @Fred Wilson mentioned in his comment, if the MAF sensor that you replaced isn't the one made specifically for your car, then it won't be able to correctly control the air fuel mixture.

Not the answer you're looking for? Browse other questions tagged engine o2-sensor emissions tune-up or ask your own question.