Typically my car will start fine when it's been sitting overnight. Then I'll drive to the gym which is 2 miles away. The car will sit for the time I'm in the gym maybe an hour and then won't restart. I'll let it sit some more, crank it and eventually I'll get it started. Then it will stall at idle. I'll let it sit, get it started again and this time it will drive a short distance before sputtering on acceleration and cutting out. Sometimes it won't sputter, and instead will just instantly cut out and I'll coast over to the side of the road. I'll let it sit for 10 minutes, start it up and move a half mile down the road before it cuts out again. This cycle repeats itself. If I can't get it restarted which sometimes happens I'll let it sit overnight come back in the morning and drive her home. The car is not throwing any error codes. The problem seems to be getting worse as time goes on. My ignition switch is getting bad as in it's becoming hard to turn and I have to play with it, but I don't think that would be the issue.

What I've done to fix the issue:

I've replaced the ICM. The Optispark is new and god forbid not failing me. The starter is new. Battery is new and charged. Spark plugs were changed with the new optispark. I had it in a shop for 6 weeks and they couldn't replicate the issue. (Of course.) They informed me the fuel pressure was good but the car has a small misfire and doesn't seem to be getting the horsepower it should. The engine has a slight shake to it, I assume that's the misfire they were talking about.

What I am going to do next:

Replace and test some cheap parts like the fuel pump relay and ignition coil, return the ICM I just bought, and hold off on taking it to another shop. This is personal. Besides anytime I mention the problem is intermittent to a mechanic over the phone I can hear an instant tremble in their voice.

So good people of SE, any idea what is going on?

I thought for sure it was the ICM.

There are two places this could be: ICM or Optispark. The intermittent nature of it leads me to believe it is ignition related. On your year of LT1, ignition issues can pretty much be boiled down to these two things (as you are describing).

Just because you've replaced the ICM, does not mean it isn't at fault. Usually the way the engine dies with an ICM fault is it ... well ... just dies. The ICM, since it sits directly on the head (in stock fashion) absorbs more heat than the little cooling fins can dissipate. The easiest way to cure this is to do the ICM Mod. This entails getting the ICM off of the head. There are two ways I've done this in the past, that being using three 3/8" flat washers under the bolt/stud. This raises it off of the head and allows it to cool better. I've also found the small spacers which are used on the exhaust are perfect for this. The spacers are found on stock exhaust manifold bolts. Usually, if you put headers on there, these will not be used. Since I personally keep everything (car related - you just never know when you'll be able to use stuff), I had a few I found in the parts bin. If you haven't done this mod, I would highly recommend it even if it isn't the issue. It's very easy to do and will save you money/headaches down the road.

EDIT: Here is a pic of how the ICM mod is commonly approached. Normally, the ICM goes behind the studs against the head: 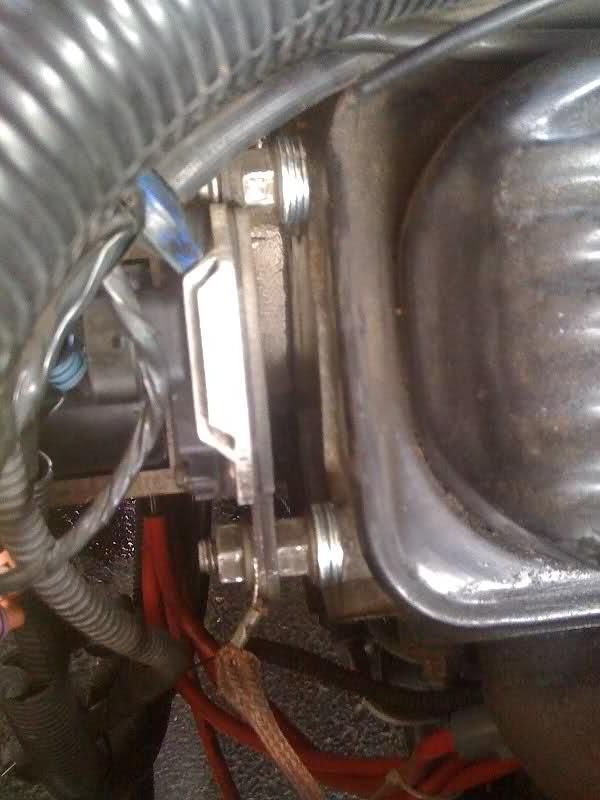 The second area to look at is the Optispark. I don't know how long you've had your Z28, but you'll need to know most Optisparks produced today are pieces of junk. Just because you put a new one (or seemingly new one) does not mean it's not at fault. Considering you are seeing your intermittent issues recur and are not exactly the same, this is where I'd look for your issue. Most of the rebuilt Optisparks have cheap Chinese sensors in them. You can find them on eBay for cheaper. In this case, you get what you pay for ... crap.

If you bought a replacement Opti from one of the chain stores (Advance Auto, AutoZone, O'Reilly's, Checker, etc), at least you'll have a warranty. You and I both know these things are a PITB to replace, seeing as how they are under the water pump. At least with the warranty, you'll sooner or later get a good one which will last 100k miles or longer. I've actually had pretty good luck with the purchasing them at the chains. I've also purchased them from eBay (bad choice) and used. Used ones are a complete crapshoot. The sensor is the true part which is the most important. Getting one with a Mitsubishi optical sensor is key. Most anything else is crap (this is on the regular Opti, see below for other options).

To alleviate future issues with the Opti, there are several things you can do. The 93-95 came with the non-vented type with the spline gear. Converting this over to the vented type helps in the long run remove ozone which builds up inside the unit. Venting the gas will prolong the Opti's life. There is an MSD kit which allows you to do this by changing out to their cap/rotor. This is a lot more cost effective than purchasing the timing chain cover and different Opti and other things needed to convert it over. It used to be the MSD Optispark was a piece of junk (I don't know if that is still true). It would be just as bad as any of the cheap aftermarket ones purchased. There are also other ways of fixing it with replacing the stock unit with the Dynaspark, though they can be cost prohibitive. There is also the LTCC setup which eliminates the sparking going on inside of the distributor by making it a coil per cylinder (like an LS engine setup). It does, however use the optical setup inside the Opti, so if the one you have is bad, you still need a good one in order for this to work.

Since the fuel pressure is good you may also want to check for a vacuum leak. Sometimes a vacuum leak can cause intermittent problems such as this because it may be partially sealed at times. I would carefully check all of the vacuum hoses and the intake boot for cracks or holes.

I had the same problem. What I did to fix it was to reset the ECM. Running great now

Not the answer you're looking for? Browse other questions tagged starting chevrolet ignition camaro stall or ask your own question.