What are the consequences of using an expired tire?

Based on this answer I know that the consequences are less security and low performance. But I would like to know if there is anything else and also explain those two issues and why do they happen more precisely.

Does this affect the way the car reacts when braking? Does an older tire take longer distance to brake? Do the wheels block "easily"?

Short answer: Yes, yes and yes. BUT: A tire doesn't have an expiry date.

The reason for all three points is that the rubber gets harder over time and looses its grip / traction, especially on wet ground. Keep in mind grip is not only important for acceleration and braking, but it also keeps the car on the street in curves.

Rubber not only gets harder, but also more brittle, and get this little cracks, which indicate an old tire: 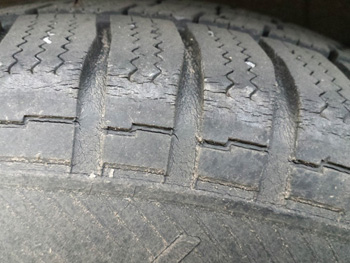 However, these cracks are usually only at the surface and don't build an additional risk.

In the other question, it is stated that

but this usually doesn't mean there's a fixed date after which they are not allowed to be used any more. It merely means that life time of a tire is limited and there will be a time when you better change them.

Sometimes, there are laws limiting the maximum age of tires. In Germany, there is a single case: A trailer usually has a general speed limit of 80km/h, but some have 100km/h. Those need tires younger than 6 years.

But in general, Manufacturers say tires should be replaced latest after 10 years, while other recommendations start at 6 years.

What's quite interesting is that a tire doesn't start to age at its production day. Aging happens when a tire is inflated, exposed chemicals (petrol puddle at the gas station, ozone, oxygen, ...), sunlight and heat and when the tire is mechanically stressed. Or in short: When it's used.

A new tire stored uninflated, cool, dry and dark can remain as good as new for up to five years. (But which tires are stored for 5 years before first use?) I didn't find an english reference for this claim, but my last link at least supports this.

In the worst case, using an expired tyre can be fatal - as the rubber ages, it perishes (dries out), and becomes weaker and brittle. At speed, it heats up and the pressure increases (as the air inside also heats up). This can lead to a blowout - there is a well known case in the UK where a classic car owner had 25 year old 'new' (i.e. previously unused) tyres on his car, had a blowout at speed on the motorway, and was killed in the resultant crash.

Even in a less drastic case, the harder, drier rubber will have significantly less grip, and so stopping distances will increase, as will the risk of skidding.

Never fit a tyre older than 6 years, and replace any older than 10. It's not worth the risk...

Not the answer you're looking for? Browse other questions tagged tires performance security replacements or ask your own question.

6
When do I need to replace my spare tire?

7
Assuming identical and sufficient ABS, and ignoring aerodynamics, are tires the only factor for braking distance?
6
What are the side effects of using the wrong tires?
1
Running 4 tires of a slightly larger section height than stock/recommended
15
How can I know if the airbags have expired and what are the consequences?
11
What is gained with “performance” spark plug wires?
2
Strange case of low-speed squeaking / grinding noises after new tires / alignment
0
Tires of the same model but different sizes - how much difference in quality and performance?
4
wheel offset and effect on car geometry
0
Tire and Rim Damage From Scraping Curb
0
Off road tires for a Subaru CrossTrek.2018 what needs to be done to get a good 75 height tire?