Someone else was in the driver seat and they were trying to drive. At one point I took out the key and when he put it back in the car wouldn't start. This was yesterday and it still won't start. The brake pedal is stiff and won't move and I can't get the gear down from park. The steering wheel won't move either. If I insert the key it clicks and if I turn it it clicks as well. The display does turn on and so does the radio.

Here is the result from the multimeter test: 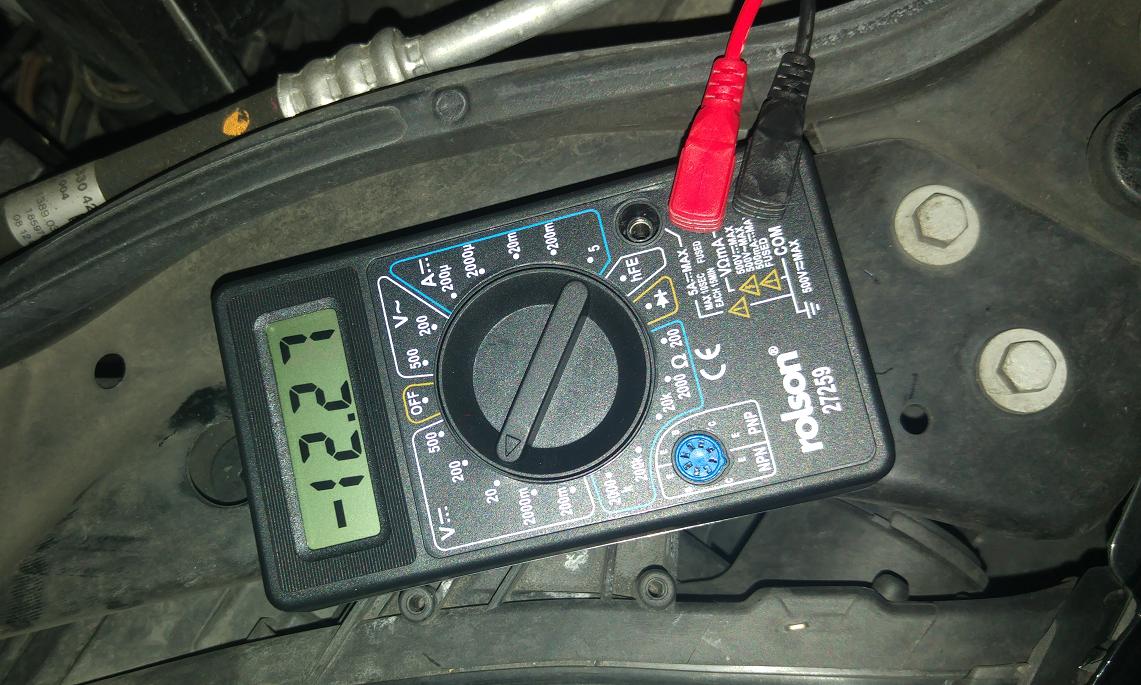 I also bought this kit to jump-start the car: http://www.halfords.com/workshop-tools/garage-equipment/jump-leads/phaze-4-in-1-jump-starter

It did not work.

There's a lot of good answers and discussion about electrical issues and other complicated things, but to me it sounds like the steering lock is under tension and not allowing the key to turn all the way and start.

You can sit in almost any car, turn it off, remove the key, and then turn the steering wheel until it clicks into the locked state. The rubber tires and steering system will provide a spring-like force that holds the steering wheel tight against the steering lock. The tension is very strong, and turning a tiny key is going to be impossible with the forces involved.

Grab the steering wheel and turn it away from the lock (just a little is ok) to relieve the pressure and try to turn the key.

This is the only thing I can think of that would stop a car from starting by just playing with the key and steering wheel.

A mechanic looked at it and determined the steering lock was the problem. He replaced it and it works now. I don't know what exactly was wrong and how a bad steering lock caused all that. I don't know what caused it. I remember the driver was fidgeting trying to get it started. Could trying to turn the key in a certain way do it? I remember this happened before but it didn't stay like that (started it up after waiting a while) and both times the same person was in the driver seat.

I suspect the problem relates to a low battery. Actually turning the start motor is the most intensive process that the battery does. If it's low on change you can get the situation where other things will work but the starter won't turn.

Your best course of action is to use a set of jump leads or use a charger to top up the battery and see what happens.

If this doesn't work, it could be that the exciter cable that "switches on" your starter has become dislodged or snapped. The problem could also be in your ignition switch or with the cars immobilizer but I'd rule out a low battery first.

I don't think this is a battery problem, given the circumstances and the fact the radio and everything else still work - but it's possible repeated failed attempts to start the car while diagnosing the real problem might flatten the battery, giving you a battery problem on top of the original problem...

I'd suggest getting a couple of things as a precaution, which are both useful things to have anyway:

On to the actual problem. Cheapest and easiest thing to rule out is a problem with the fuses and connections leading to the starter motor, which can also result in the same combination of clicking noises while failing to start with power working for the rest of the car.

Check your fuses. Fuse box locations and descriptions should be in the owner's manual. There might be a fuse removal tool, or if not, you should be able to pull all except 50a+ monsters out by simply pulling with pliers.

If there are any specific fuses where you're not sure whether the filament is blown from looking, if you got that multimeter recommended above, you can test them by setting the multimeter to measure resistance (ohms) and touching one connector to one end of the fuse and looking for a change in reading when you connect the other. If the meter reading doesn't change when there's contact on both sides, the fuse is dead.

If they're all fine, look for loose cables or connections leading to the starter motor.

[edit - after realising I misread the question slightly, I think this is less likely than a fuse problem] Given that you mention the steering wheel being locked, and the key having been pulled out in an unusual way, it sounds like some kind of anti-theft system has kicked in.

If you don't have and can't get a spare key, it seems that official roadside assistance companies (your local equivalent of the AA or RAC in the UK) can bypass such locks in manufacturer approved ways. You might also be able to buy an additional key from your dealer.

Aside from that, there are a number of claimed fixes and locksmith companies who claim to be able to bypass such systems. I can't vouch for any, but do some research on your specific model and area.

Before committing to anything, find out what you can about what steering wheel lock related security figures your model has. Hopefully the owner's manual will tell you something useful!

Not the answer you're looking for? Browse other questions tagged automatic-transmission mercedes-benz steering-lock or ask your own question.

11
How to remove the 50 amp, 80 amp and 100 amp fuses from the positive terminal of a RAV4?
1
Ignition key gets blocked when wheels are removed and fixed again

3
How to reset the service reminder on a 2002 Mercedes-Benz CLK 200 Kompressor?
10
What could be some reasons my old diesel Mercedes won't start?
1
Car Battery problem: The car did not start
6
Trouble starting car, cold weather. MB A140 W168
3
New ALTERNATOR + BATTERY yet car STILL won't START! :'(
2
1973 dodge sportsman motor home
2
Car won't start, not cranking, but everything else works