My 2007 Tacoma loses about 3.5 qt of oil out of 5 every about 1500 mi. I know it's low because the engine starts periodically rattling, I don't know which part but it's 100% correlated to the low oil level. I know the measure because I drained the existing oil in a bucket to see how much was gone. When I add oil, the rattling stops. The remaining oil didn't look particularly dirty: 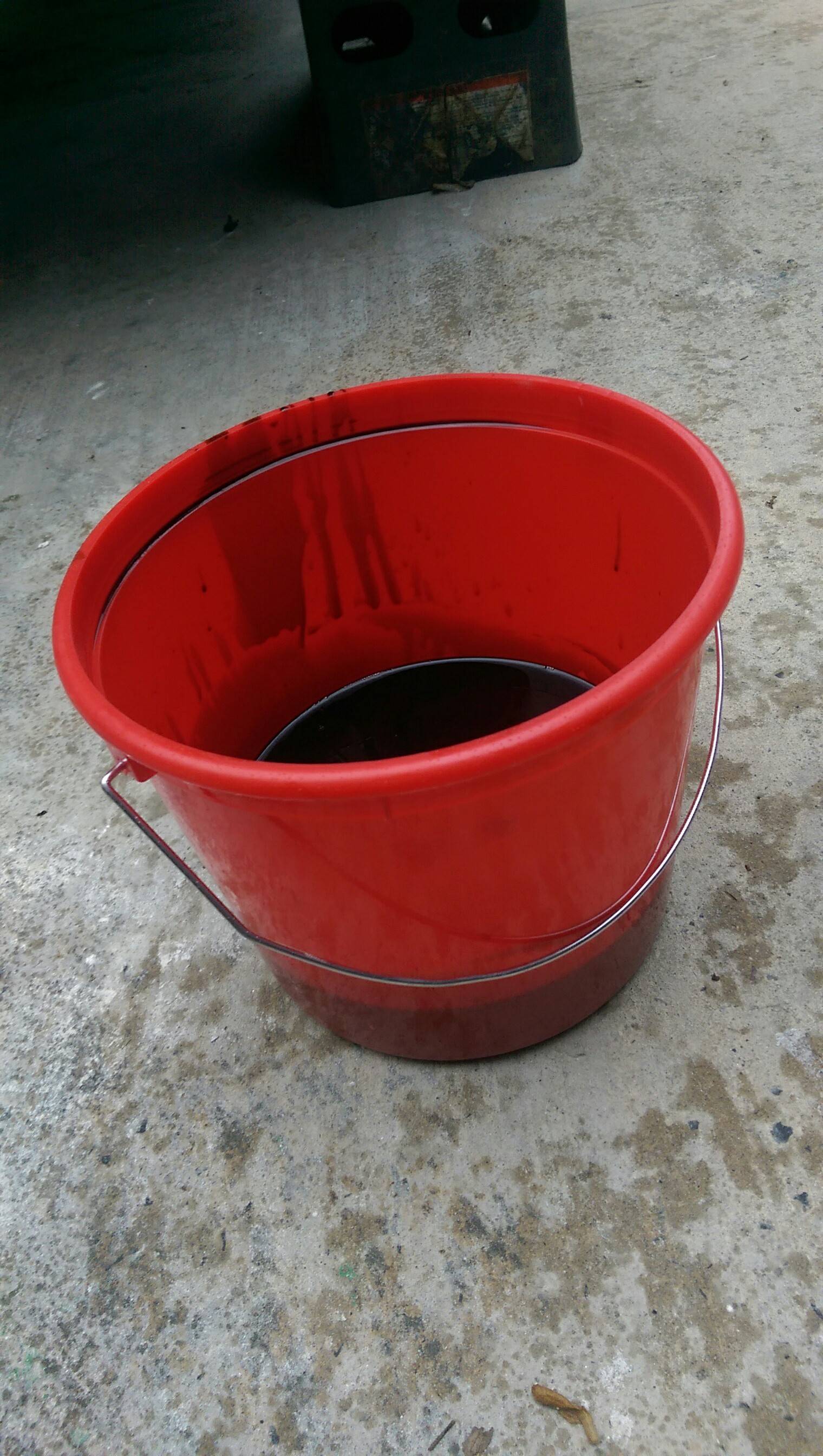 This is the second time this has happened since I replaced my head gaskets last September so I'm worried if I didn't seal it right (as there might have been minor warpage on one of the V6 deck sides but very minimal just outside the factory advised threshold, which I guess is conservative) so I may be leaking oil into one or more combustion chambers.

The first time I thought it may be a leaky oil pan gasket so I replaced it (without much analysis because it was easy and the part was cheap). But it happened again. What I'm hoping is that the oil pan may be warped so it still leaks even with the new gasket. Because, in both cases, the amount of oil that was left corresponded roughly to the size of the oil pan.

I did check around the engine and everything looks pristine, no visible leaks on around the timing chain cover or cylinder head covers. Also no signs of leakage around the oil pan but then again it may have dried after it leaked down to where the joint is.

Considering the above symptoms and metrics, should I start suspecting the I'm losing it due to a cylinder leak and should I perform a cylinder leak down test, for which I have all the tools (though have never done before)?

RELATED: How to test if oil is leaking into combustion chambers? 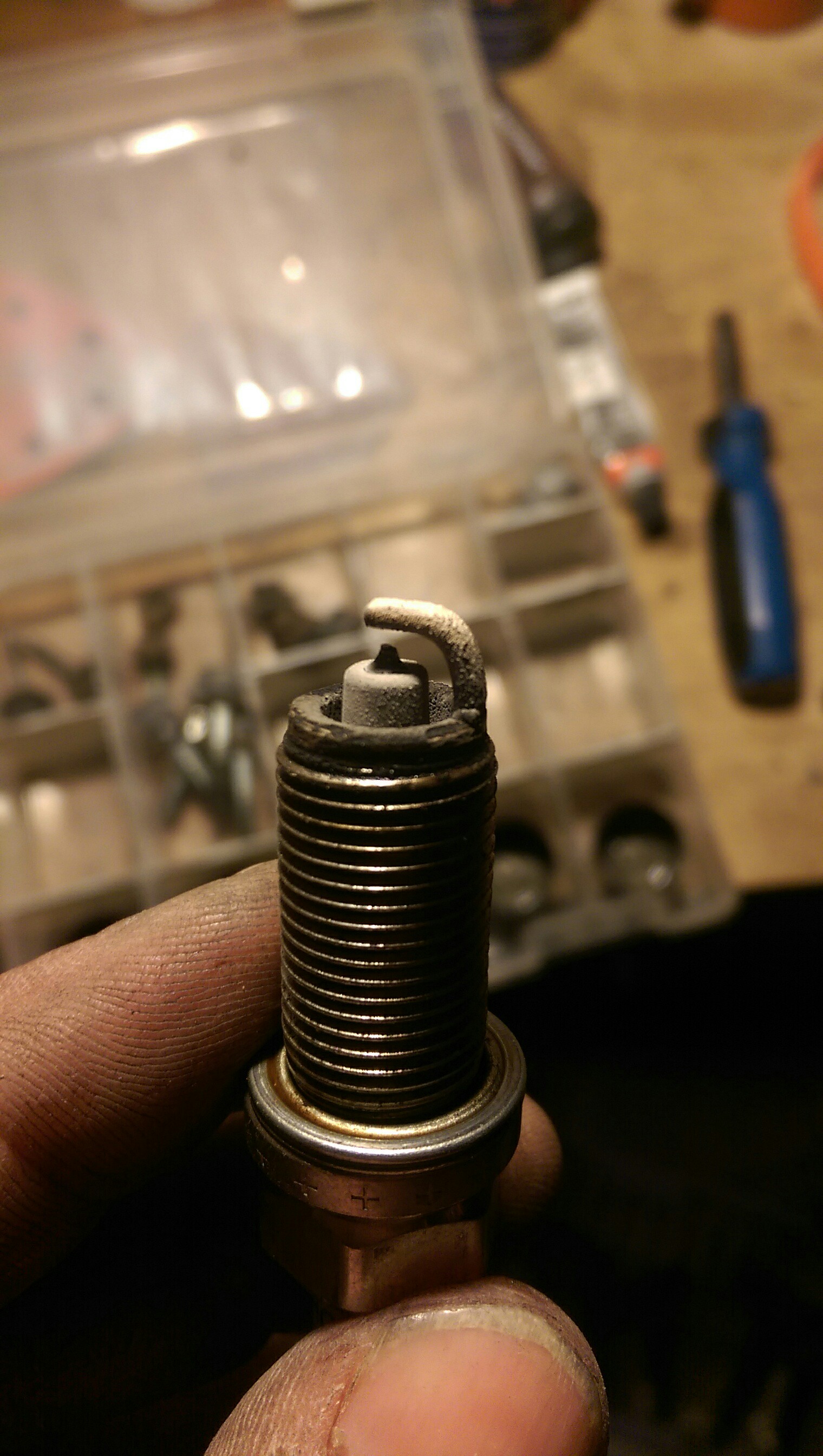 UPDATE 2: I just did cylind er leak down tests on all 6. Pumped the left gauge to 90 psi on each cylinder, before making sure it was in TDC. The right one was between 75 and 80 psi on 5/6 and only one cylinder wouldn't go past about 65 psi.

Do these test results indicate a problem? Should the right gauge always be the same as the left one on every cylinder?

If your burning oil you will see it on your spark plugs. They will be black and have buildup on them. If you find one or two that look that way and all the others are very light in color to tan then you probably have oil getting into the combustion chamber.

Here are some nice responses regarding performing a leak down test.

You can also do a compression test that's a little faster and may just tell you that one cylinder is considerably lower on compression than the others.

If you do have to remove the head, take it down to a local machine shop and have them make it flat while removing as little material as possible. If the head was torqued unevenly or was overheated prior to your ownership it could be slightly warped and creating recurring head gasket failure.

I think your definitely thinking along the right line, I would just check your spark plugs first. Physical inspection yields good data. Have a look at them for your first run on data collection then move onto harder things to do to gather more data to come up with a conclusion.

Not a desired answer, but with no leaks (to ground or into coolant) it's possible that your engine is just using/burning what some manufacturers would consider a normal amount of oil:

How much is too much?

Audi, BMW, and Subaru stick firmly to the statement that oil consumption is a normal part of a car’s operation. Subaru considers a quart burned every 1,000 to 1,200 miles to be acceptable. Certain Audi and BMW cars’ standards state that a quart burned every 600 to 700 miles is reasonable.

If a driver has to add a quart of oil once per month, that can mean adding up to 7 to 9 quarts of oil between oil changes. Those costs due to excessive oil consumption can add up because automakers more frequently require synthetic oils that can cost upwards of $9 per quart—in addition to the expense of the routine oil changes.

And that's for new engines, yours is about 9 years old.

A cylinder leak down test would be a good idea, especially if you've already got all the stuff to do one, and should confirm some causes of oil consumption. A quick search for how to stop engine oil consumption found some advice from http://www.aa1car.com/library/oil_consumption.htm 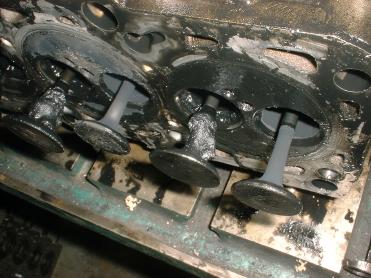 Heavy carbon deposits on the valves are caused by worn valve guides and seals.

Worn valve guides can usually be restored a number of different ways. One popular method machine shops use is to ream out the guides and install thin bronze or cast iron guide liners. Knurling is another procedure that can reduce valve guide clearances. With aluminum heads, the original guides can be driven out and replaced with new ones. With cast iron heads, the guides can be reamed out to accept new valves with oversized stems.

OR, are you using the correct (viscosity) oil? There may be a thicker "summer" oil you could be using, or a "High Mileage" oil.

Or just trying a slightly thicker oil, even if it's not mentioned in the owner's manual (that may be a bad idea, that may have worked better with much older engines). (These are mentioned in the above "Engine Oil Consumption" linked page too)

There is probably a wall full of oil additives in an auto parts store to try too (most of which may just "thicken up" the oil anyway).

And please check your oil more often! Leaving just 1.5 quarts in a 5 quart engine sounds like it could be doing damage, that's probably what the "rattling" you're hearing actually is. The oil dipstick should indicate when it's about 1 quart low, use it!

I'm wondering if you are having an issue with oil bypass, as in going through the breather/PCV and ending up getting burned through the intake. A simple catch can would prove this out for you. This happens quite a bit and is easily solved.

The leakdown test will not tell you anything about your oil loss. Its not what a leakdown test if for (check the link in the @DucatiKiller answer).

Secondly, the oil has to be going somewhere. I'll guarantee you if it was leaking in the amount you're talking about, you'd see puddles and/or oil on the engine itself where its leaking. That's a significant amount of oil to be leaking or for the engine to be swallowing, for that matter.

If you aren't noticing either puddles or smoke from the engine bay (not tail pipe), you aren't leaking it. Check the inside of the tail pipe(s) for oily soot. That may be an indication. It may be smoking from the tail pipe, but you may not notice it (people behind you while you are driving probably would though).

I agree with Paulster2. Leak down test is about compression rings, not oil control rings. You can have good compression/leak down and consume oil. I would look at the pcv system. If there is too much "blow by" the pcv cannot keep up. Make sure there is vacuum to the pcv, and enough vacuum. A stopped up pcv vacuum port/line will cause excessive oil consumption and can cause leaks and/or oil consumption as pressure builds inside the engine. Fuel injected engines do not smoke like carbureted engines did. Looking at he plugs will help in figuring out where the oil is going. Dark, sooted plugs are oil burners. Whitish plugs are normal. PCV valves are cheap. I would change it and make sure all breather tubes are clear.

Not the answer you're looking for? Browse other questions tagged toyota oil-leak tacoma cylinder or ask your own question.

18
What is a leak down tester and what can I do with it?
9
How to test if oil is leaking into combustion chambers?

5
Ford Taurus common oil leak area?
4
Oil leak from oil pan in new car, will gasket repair have shorter life than factory seal?
8
Cylinder misfire after leak down test
4
How bad is 30% cylinder leak?
1
Mazda mx5 mk1 1990 Cam oil seal leak B6 engine with 167.000km
9
Can leaky cylinder explain oil loss to burning?
1
Can I use UV dye to find an oil leak, after having drained the oil?
0
Why would an engine leak oil only at high speed?
3
Can one detect coolant leak due to blown head gasked by visual inspection of pistons/spark plugs?