What are the protrusions on a front-end bra for?

Every now and then I come across a car that has parts of its front covered in a leather-like tissue. Finally, I have learned that these things are called front-end bra or front-end cover. The linked Wikipedia article also has some discussion about the rationale behind this cover and how useful or not it is.

However, most of the covers I see also have two protrusions consisting of the same material basically folded up to a triangular shaped bar, as can be seen in the image below (source): 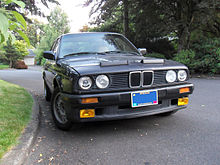 Unfortunately the Wikipedia article does not explain what those protrusions are for. The only thing I could imagine is that they are thought as some kind of wind deflector to keep the wind shield cleaner and/or provide better functionality of the wipers at higher speeds. Am I right with this idea or is it something else?

I like to refer to those as eyebrows, and in the specific image you posted, they are to add some stiffening and down force to the center of the bra so the flat edge against the hood doesn't flap around in the wind. Since there is nothing to fasten the center of the bra to, the designers had to resort to aerodynamic forces to keep it in place.

Not the answer you're looking for? Browse other questions tagged body frontend or ask your own question.

5
What is the adhesive used to attach the gasket to the hood?
1
What is the plastic part under the front bumper of a 2007 Sentra?
2
What are your main concerns when getting your car wrapped with custom-patterns?
3
2006 G35 - Body shop installed wrong front bumper
16
What are the pros and cons of fiberglass body?
1
Tire moves when brakes are applied, car slides/jaunts sideways when you accelerate or apply the brakes
0
Front end motorcycle wobbly, feels "loose"
2
What does it mean if there is "Bondo" under the trunk mat behind the spare wheel?