What is the yellow precipitate in my outboard's carburetor?

I've got a 2008 Tohatsu 9.8 HP four stroke outboard. My low speed jet keeps getting fouled and on several occasions, I've found yellow almost crystalline "growths" for lack of a better word inside the carburetor. They look like tiny sulfur crystals, and crumble into incredibly fine powder if you touch them. Since everything's been soaked in gasoline, there's no way to smell the powder to see if it is indeed sulfur or not. 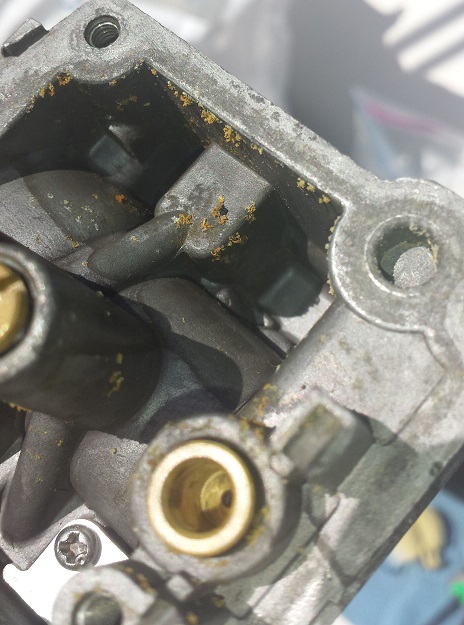 I use alcohol free gasoline (now, but there's still a mixture of gas with ethanol and mostly ethanol free) in the tank. I use both Marine Sta-Bil & Startron in my fuel. The fuel runs through several filters including a Racor Fuel/Water separator and there's nothing evident in the fuel if I run it into a clear glass jar right at the carburetor inlet.

The boat sits in a marina in brackish water, fairly close to the river inlet into the bay, so it's mostly salt water.

I've got the carburetor soaking in dip right now, and new jets and gaskets on order. I've gotten so good at removing and cleaning my carburetor I can do it in about 40 minutes now. I almost always find the low speed jet plugged with something. I can't blow whatever it is out, I have to use a fine piece of wire to dislodge whatever it is (I'd assume a glob of the yellow stuff, but can't really tell, it's so small).

Any ideas? Any ideas on how I can prevent it in the future? This isn't the first time this has happened.

EDIT: Yesterday 30 April 2016 I reinstalled the carburetor and the engine ran just fine, although it didn't seem to want to settle down to an even idle, but it only died once while it was still cold. I applied a little choke to make the mixture a bit more rich until it warmed up a bit, then ran it at idle for about 20 minutes or so. After that, I pulled the fuel connector and ran the carburetor dry. I probably won't be back for a weekend or two which is about how long it's taken in the past for the crystals to show up.

The experiment begins, cross your fingers...

EDIT: 06 Jun 2017 It's been a long time getting back to this, we didn't take the boat out for a very long time due to various medical problems my wife & I experienced in the interim. That said, the last time I was at the boat (and ran the engine), I ran the fuel out of it as suggested. Several weeks ago we took it out for a short sail and had absolutely zero problems with the outboard. We ran the carburetor dry on that occasion as well and I hope to continue with this new behavior. I'd like to unlearn how to clean the carburetor so quickly in the future.

Thanks for the suggestions and help, my wife & I appreciate it.

Those are the remnants of gasoline

When you let gasoline evaporate it leaves behind various elements within the gas that can't dissipate through evaporation.

These remnants can clog various galley's in your carburetor as well as clog jets.

Even if you are soaking your carburetor you will still want to physically clean out the jets and use compressed air to ensure there is no buildup plugging the various circuits within the carburetor body.

You can use thin copper wire strands to poke through jets. Hold them up in the light and look through them to ensure you have removed any debris that may be blocking them.

In the future, as @moab states in his comment, you will want to run the carburetor float bowl dry after use to prevent this from occurring again.

Not the answer you're looking for? Browse other questions tagged fuel-system carburetor boat or ask your own question.

7
How long can "Stabil"ized gas stay fresh? and can it be improved?

2
Ford 460 Does Not Start Only Backfires When Cranking Over
12
Does the air screw only affect the pilot jet?
4
Leaking, then not leaking, carburetor
9
Carb. Rebuild or Adjustment?
3
Diagnosing a boat that wont start
1
Fuel was chocking while entering into the carburetor
2
Ran 2 cycle without mixed gas :(
2
Vacuum never decreases while leaning out carburetor mixture