Is it safe to drive in race conditions with missing lug nuts?

You know sometimes you read something and think "What?"

Well, would you be happy to drive a 900 BHP car in a competition with lug nuts missing? Apparently NASCAR has introduced a rule change so that teams no longer have to fit all of the lug nuts after a tyre change. This may see some cars on the track with just three of five lug nuts fitted.

Furthermore, one of the drivers for next season, Tony Stewart, has just been handed down a $35,000 fine for expressing that opinion that this may be dangerous.

The apparent reason for the rule change is that they hope to reduce the number of mechanics in the box during a pit stop.

I have my own opinion on why this is the wrong thing to do. In the early 1980's, Lancia engineers, working as service crew on the Lancia 037 Group B car, devised a wrench which was essentially multiple equal length extension bars with magnetic sockets on the end. The "drive" wrench would run in the opposite direction to what was required and turn a central cog to drive each socket at the same time. This meant all lug nuts could be removed and refitted by a single mechanic. 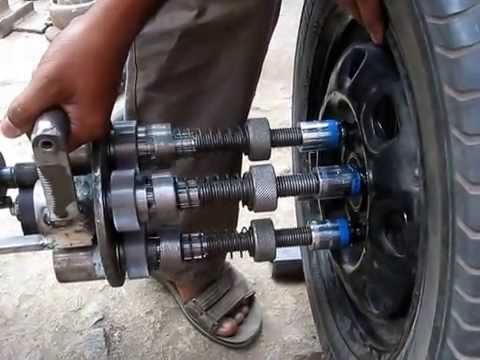 The obvious alternative to this is an F1 style single centre nut on a large spindle.

NASCAR appear to have ignored this technical solution and have simply changed the rules to allow what I would personally call incorrectly fitted wheels.

Now, I've personally used a car with one nut removed from each wheel after someone tried to steal my wheels, removed all but the locking nut from one wheel and obviously took the nuts with them. This was only done to get the car home where the missing nuts were replaced.

So, my question is this; would you consider it safe to use a car with missing wheel nuts / lug nuts?

(Anyone involved in NASCAR professionally probably shouldn't answer this question for fear they receive a fine too).

As suggested, to clarify what I mean by "is it safe?"

I wondered if there are any engineering calculations that can be applied to different nut configurations? Is there likely to be increased failures running in the reduced lug nut configuration? Have there been any case studies into this?

Quite simply, no it is not safe. If a car manufacturers specifications say 5 studs, that's because they've done their homework on the forces involved. Think of the worst case: braking hard while turning sharply on a rough surface. The mass of the car, acting at an acute angle to the rim, comes down on the wheel lugs with a g-force proportional to the deceleration x mass. If the wheel is at the point where the two missing studs are aligned vertically, all this force is borne by the single lug left that side of the wheel's axle - a recipe for stripped threads, wobbling wheels and in a race: injuries or worse.

This 'decision' is lethal.

In mathematical terms, the wheel now has 3/5 of the strength, with 5/3 of the load applied to each stud. Not safe at all.

Engineers typically design parts to withstand a greater load than they are actually expected to see. This is known as a "factor of safety" and assures the parts won't fail when extenuating circumstances are encountered where the product is stressed beyond the design calculations considered. Given that NASCAR is a very specific type of racing with (assumingly) well understood load cases and tons of telemetry data, it's reasonable to assume they can run a lower FOS than you (the amateur without millions to spend on R&D and without hundred of engineers and data analysts on staff) or the typical manufacturers (who must account for conditions of use by all sorts of people, for all sorts of purposes, in all sorts of environments, all over the world) would normally allow.

For example, let's say a single stud has a shear strength rating of 160ksi. If we have five studs, and we assume a perfectly even distribution of load (for simplicity's sake we will consider only the studs and only the torque of wheels, which we will again simply assume applies only shear load) than our five stud pattern can handle up to 800ksi total load before failing.

Now, if we knew the designer targeted an FOS of 4, then that means the design is capable of handling 4 times the normal expected load, so if we divide 800ksi by 4, we can determine the expected total normal load is 200ksi.

Theoretically then, we should, under normal expected conditions, be able to "safely" handle that load with only 2 studs (200/2 is 100 which is less than 160).

Finally, a few things to consider before you throw away half your lug nuts :P

For one, we (you and I) don't know what the original loads are or what the designed FOS number is - it's not something in the spec sheets, and you don't know if it was 1.5, 2, 4, or 6 - so without doing all the calculations ourselves to determine the normal loads, and knowing all about the design, we can't objectively say whether or not 1 or 5 studs is "safe."

Second, race cars quite often run at a much MUCH lower FOS than production cars. This is what you call "pushing the limits" and part of the reason why stuff breaks on race cars a lot more frequently and a lot differently than on production cars. So where a normal production car might run an FOS of 5, a race car might run at 1.5 - allowing them to remove more material and save weight (or in this case time) with the trade-off being less margin of error and more risk of breaking something.

Not the answer you're looking for? Browse other questions tagged safety lug-nut or ask your own question.

22
How do I loosen stuck lug nuts in order to change a tire?
14
Does using an impact wrench instead of a breaker bar prevent damaging to nuts or bolts?
3
Loud bang while driving, then lug nut is missing - what happened?
7
Is it acceptable to use a 3/4 inch socket to loosen what are presumably 19mm lug nuts?
9
Are there any risks if I use impact wrench to loosen lug nuts while the tire not touching ground?
4
Can lug nuts be tightened with a powered non-impact driver plus torque wrench?
3
Is it safe to use a lugnut with a different outer shank diameter?
39
How do I remove a destroyed lug nut?
2
installing a locking lug nut
2
$50 To Throw on a Missing Lug Nut