BSFC (Brake Specific Fuel Consumption) - How is this a beneficial measurement?

Measuring various attributes of an ICE (Internal Combustion Engine) and how it performs certainly gives a greater understanding of how a particular ICE performs at various RPM's as well as give the ability to understand economy.

Brake Specific Fuel Consumption is one of those measurements.

I am looking for answer that illustrates the math behind BSFC and assists a novice in understanding why BSFC matters to them.

What are the various metrics and attributes used to come up with a BSFC number?

Why does BSFC matter?

How can BSFC be changed on an ICE related to intake, ignition timing, exhaust and cam timing?

Going to take a stab at this... I am not an expert, just what I've put together in my head. A lot of this gets into more general engine tuning/building.

BSFC is basically how much power you output for a given amount of fuel. For a given engine, this is dependent on load and RPM. Your lowest BSFC is around your maximum torque at part-throttle. 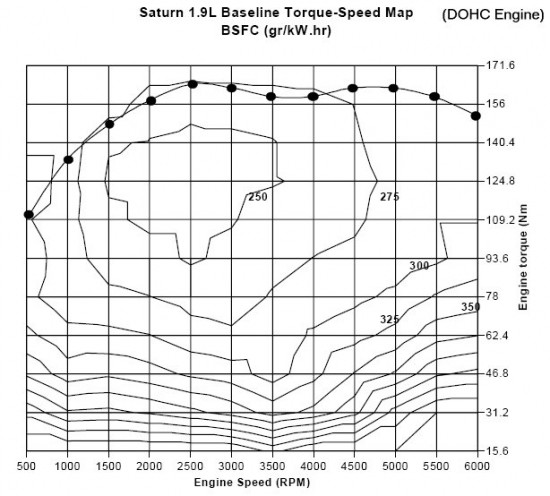 It all has to do with how efficiently your fuel is being burned and turned into rotating force. Most of how efficiently your fuel burns comes from how well atomized the fuel is. This depends on air velocity and temperature of your air/fuel mixture. Gasoline vaporizes at 196*F, so anything above that should be good. Air velocity is said to be best around the speed of sound.

I am not 100% sure on how this is exactly calculated, but I would image it would require a dynamometer to measure power output and some way of measuring fuel consumption, possible calculated through fuel pressure, flow rate, and pulse width.

BSFC shows how efficiently the fuel is being burned. This is important for engine efficiency and getting good power and gas mileage out of your engine. When manufacturers determine the gearing of the transmission, they want the vehicle to be at peak efficiency around 60mph (since most highways have a speed limit of 55 or 65). This means the final drive (through the transmission top gear, differential, and tire size) will be set so the RPM is around the lowest BSFC while on the highway. Your torque converter will likely be set at a similar RPM, but this is partially because of it being near max torque.

RPM matters for 2 reason - air velocity and heat absorption. At lower RPM, the air velocity is not moving fast enough to properly atomize the fuel. At higher RPM, the fuel is not soaking up much heat before being ignited, and does not burn as efficiently. Your sweet spot is in the middle somewhere. This is dependent upon a lot of things I will get into later.

Load is similar. When the throttle is closed, the air velocity is slow. At higher throttle, you need to run the engine a bit rich to absorb some of the heat generated. This is a big deal on forced induction engines.

SO as to how to change the BSFC on an engine... basically EVERYTHING matters, but I will get into some of the more key points. All of your parts need to work together, so aim for the same RPM range of power on all parts.

Higher compressions ratio means more power is generated from every combustion. This causes BFSC to go down. The main limitation here is how far you can go before you start generating too much heat for it to be efficient.

Longer stroke means you have more mechanical advantage when the piston is pushed down. This should give you a lower BSFC. Longer stroke lowers the RPM of the lowest BSFC.

Camshafts - the main specs here are lift, duration, and overlap. These factors work together to determine where your engine produces the most power. In relating this to BSFC, it will be lowest when your air velocity is most optimal. Camshafts alone are worth of a long discussion. Typically, for a given cam shaft, advance to move power up, retard to move power down. For the lowest BSFC, aim for power around max torque.

Exhaust - Not sure exactly how exhaust is tuned, but I believe it again deals with the velocity of the exhaust gases. A little bit of back pressure is said to help torque. Likely to help heat incoming air/fuel. Air should flow efficiently. Pipes should be an appropriate size, if they are too large, you will loose velocity.

Ignition timing - Everything ignition related basically just needs to work correctly. The timing should be set as advanced as possible without causing pinging.

Fuel tuning - you want it to run as close to stoichiometric (14.7:1) as possible. You might be able to go a little lean. This is a constant battle between efficiency and heat. Fuel helps remove heat from the cylinder, but unburned fuel is inefficient. Too little fuel causes too much heat and you get detonation.

Air intake - Warm air provides better BSFC as it atomizes the fuel better. Most engines have an EGR valve to help heat the air in the intake at part throttle and idle.

All of these items are very dynamic and vary based on load and RPM. This is why cars have electronic ignition, fuel injection, variable valve timing and variable intake manifolds to make engines run efficiently as possible at all RPM.

While we are on the subject. I know a 'mad scientist' of sorts that has designed some interesting things. He goes by MPGMike on several forums. He has done a lot of really interesting stuff. I've met him and talked to him several times at car club meetings.

Groove the back of the intake valves for more turbulence

I have a cylinder head modified by him sitting on the shelf with the Lynz, and goves on the CC and intake valves. Google them for pictures and info.

The BSFC number is usually calculated by the fuel consumption divided by power output of the engine. The BSFC rating for a specific engine will also vary depending on the rpm and load.

The 3 dimensional(BSFC/rpm/load) map of the BSFC numbers is useful for finding the most fuel efficient operating conditions for a specific engine. Peak efficiency commonly around full load(throttle) at peak torque. It is can be used to tune a transmission shift point for better mileage.

Most things used by engine manufacturers to increase MPG/Effiency would also be beneficial to BSFC.

Some examples that I know of, that can significantly increase BSFC in existing engines.

15
Why does stopping and starting a car in heavy traffic burn more fuel?
13
How to add a 7th gear to a car to enhance fuel economy?
4
How can a car be tuned for low/mid/high end torque?
2
Torque reduces gradually after certain RPM
2
Would restricting air intake reduce fuel consumption?
1
How does a tire's diameter and width impact fuel economy?