I have used Torque Pro App for sometime in my Hyundai i10 Era (2011 model) and it gives me Horsepower at wheels. But the values seems to be much less. To find out the problem, I logged the car OBD speed using Torque Pro app, calculated the Hp at wheels myself and the numbers don't match with the ones that Torque Pro shows me.

So I am little curious how does Torque Pro calculate the Horsepower at wheels.

I have used the weight of the car as 1050 kgs. Formulas I am using to calculate HP at wheels:

I am unable to understand why is there a mismatch? How do I calculate Hp at wheels?

The problem you are encountering is the limited resolution of your speed plus fluctuation plus slightly different approaches to calculate power. And finally, you have to think about the term power at wheels.

What exactly is power at wheels?

I would say, this is the tangential force applied by the wheels onto the street (i.e. the force that's pushing you forward) times speed. But this is not the power delivered by your motor nor the power that accelerates you!

Motor power vs. power at wheels

The tires experience some friction while rolling on the street, and with higher speed, drag becomes more important. I have no idea about friction, but the power loss due to drag can be calculated by this formula 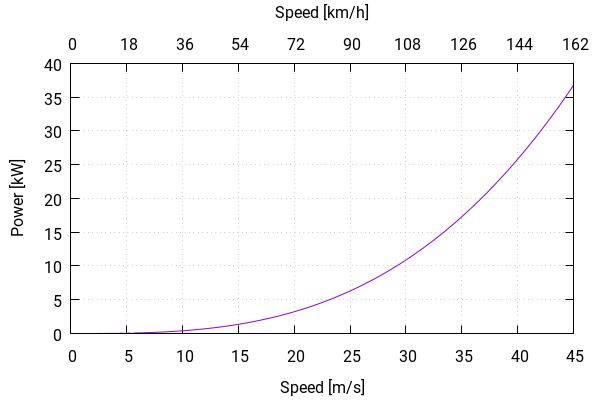 Depending on if you're driving down- or uphill, the car gains or has to invest energy, which can be calculated via

You have given two formulas:

gives the average power needed to change kinetic energy within a given period. This does not reflect that power may vary over time. The instantaneous power can be obtained by choosing shorter and shorter periods. I don't want to bother you with what Mathematicians call deviation, just the result is your second formula:

However, the averaging effect of the first formula can be beneficial if precision of your values is not so good. And since your data was taken once per second, it shouldn't make a big difference which formula you use. BUT the second formula needs acceleration, which is not available in your data and needs to be calculated from subsequent speed values. This also means that both formulas don't give the exactly same result (btw: there are better methods to calculate acceleration):

I used both formulas for your data, and they give quite consistent results for the same source of speed.

OK... Soooo much text, but no look at the data yet, so let's do it. I've prepared two pictures, each showing speed, acceleration and power. The first showing the entire tour, zooms to time range 25-100s. Click to enlarge: 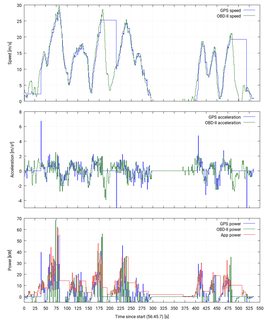 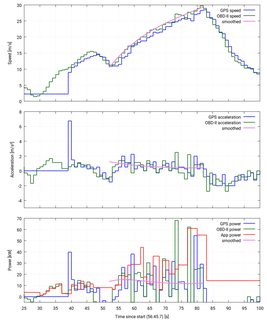 Happily, GPS and OBD speed are mostly consistent, but there's always a small difference as expected, and sometimes, your GPS signal was lost.

But you'll also notice fluctuations, e.g. at 75s and 125s. These jumps up and down are more prominent in the calculated acceleration than the slow trend, which is the real acceleration. So it's clear that the calculated power is a total mess, though the real data seems to be inside there. (It doesn't matter which formula you use to calculate power, the result is the same.)

The second image contains a violet curve, which is a polynom of 4th grade fittet into the OBD speed data to get a really smooth curve, which yet describes the speed well. The deviation of this curve fits really good into the acceleration data. The power data reveals that the acceleration of your car was caused by just about 12kW in the end.

Is this feasible? Your motor has about 64kW@6000RPM, if it's the stronger one. But at that time, it was running at about 3400RPM, and could deliver roughly 36kW. I just assumed that power increased linearly with RPM, which is more or less true. You can easily subtract 10-15% due to friction in the drive chain and 10kW due to drag. Subtract 30% of 12kW (=3.6kW) for inertia, as Zaid wrote, and you get 17kW. This is still more than 12kW, but air-condition, inclines and other effects could easily explain this. (Did you kick the pedal down to the floor?)

What you can do

If you don't know how to fit functions into data (EXCEL doesn't really know), you could try different approaches to smooth your speed values. For example, make a new column and in each row calculate the average of the speed of this row, the row before and after. Maybe, repeat this several times or extend it to the last two to the next two rows.

You may have noticed that even the power calculated by Torque shows some fluctuation, though it seems to be a little smoother. Though I don't know how exactly Torque calculates power, it seems to apply some low level smoothing. Also keep in mind that your smartphone has many more data sources than just speed, it also has a accelerometer and knows its GPS position. It's possible that Torque uses this data too. And finally, GPS data is usually only available once per seconds, the other data more often. My mobile can read out the other sensors 15 times per seconds. The resolution is also higher than what you have in your data. So it's no wonder its calculated power differs from yours.
And: At 58:03.7 Torque claims a power of 60.88kW at 3349RPM, this is impossible for your motor and definitely shows that Torque doesn't give precise data, too...

Two things to watch out for when using these equations

Both equations have their merits and limitations

Note that neither of these equations have taken the effect of aerodynamic drag into consideration.

Not the answer you're looking for? Browse other questions tagged torque horsepower obd vehicle-dynamics or ask your own question.