Why is a flywheel important to a car? [duplicate]

I know that a flywheel is used to provide inertia. Do motorcycles have them? If not, why don't they have it?

A flywheel is used to even out impulse, and to store energy (these are both the same thing in reality)

An engine, especially when running slowly (such as when starting) has relatively large impulses from each cylinder firing, but without a flywheel there is very little to keep the crankshaft turning once the sparkplug had fitted and expanded the mixture in a cylinder.

What the flywheel does is store up the energy of that explosion in rotational energy, driving the crankshaft round to the position for the next explosion, and so on.

Yes, a heavier mass flywheel takes more energy to move, but it also keeps moving longer so there are pros and cons.

A dual mass flywheel typically has two flywheels, one of which can be declutched and disconnected when not needed (ie when under light load, moving at speed)

I was under the impression the purpose of the flywheel was to assist the starter pinion gear to start your motor: 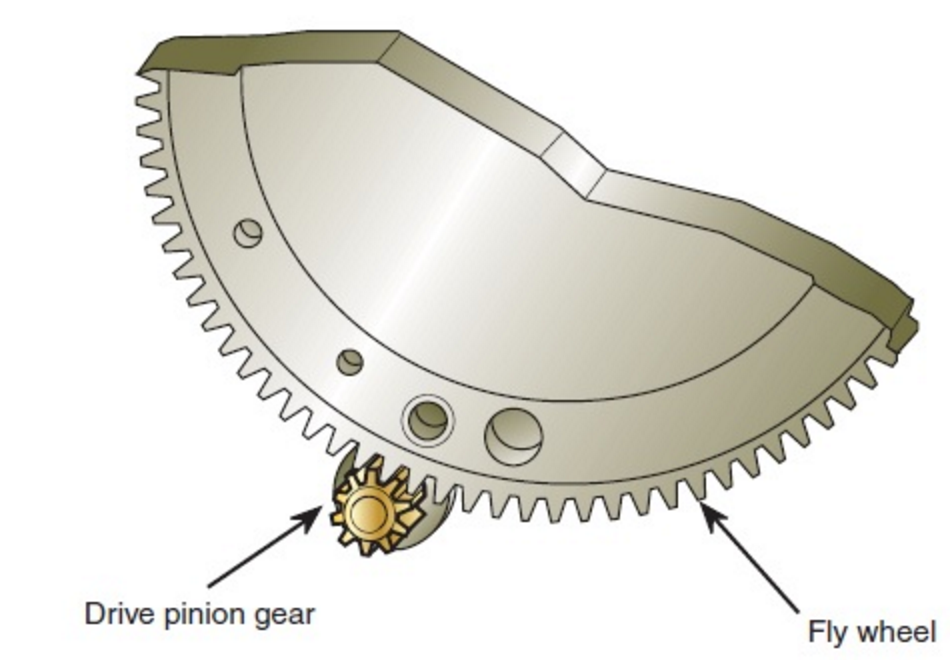 Not the answer you're looking for? Browse other questions tagged engine-theory flywheel or ask your own question.

20
What does a flywheel do and what is it connected to?

20
What does a flywheel do and what is it connected to?
37
What are the benefits of a lightweight flywheel and why aren't they lightweight already?
12
Software solutions to lighter flywheel issues
14
What are the differences between a dual mass flywheel and a standard flywheel?
4
Why don't valvetrains use an idler gear between the cam gears
2
Did I damaged my engine trying to remove the flywheel nut with resistance on the pto coupler?
4
Why don't cars have multiple disk clutches as motorcycles do?
1
How to stop flywheel from spinning without special tools?
1
Can forcing into gear with the engine off cause damage to the pressure friction plate, flywheel or cause the clutch to burn out?