Why do we mostly use fossil fuel instead of a more reliable and larger sum fuel?

Why do we mostly use fossil fuel instead of something like... Alcohol? We used it in a portion of our gas, so why don't we use it in greater quantities?

My guess is alcohol does not contain enough oxygen to allow for a smooth combustion. Does fossil fuel?

What you really want to look into is Energy Density. So called "Fossil Fuels" have a very high energy density, which is very important for a vehicle fuel since you have to load it and carry it around with you.

This chart shows fuels listed in order of their energy density: 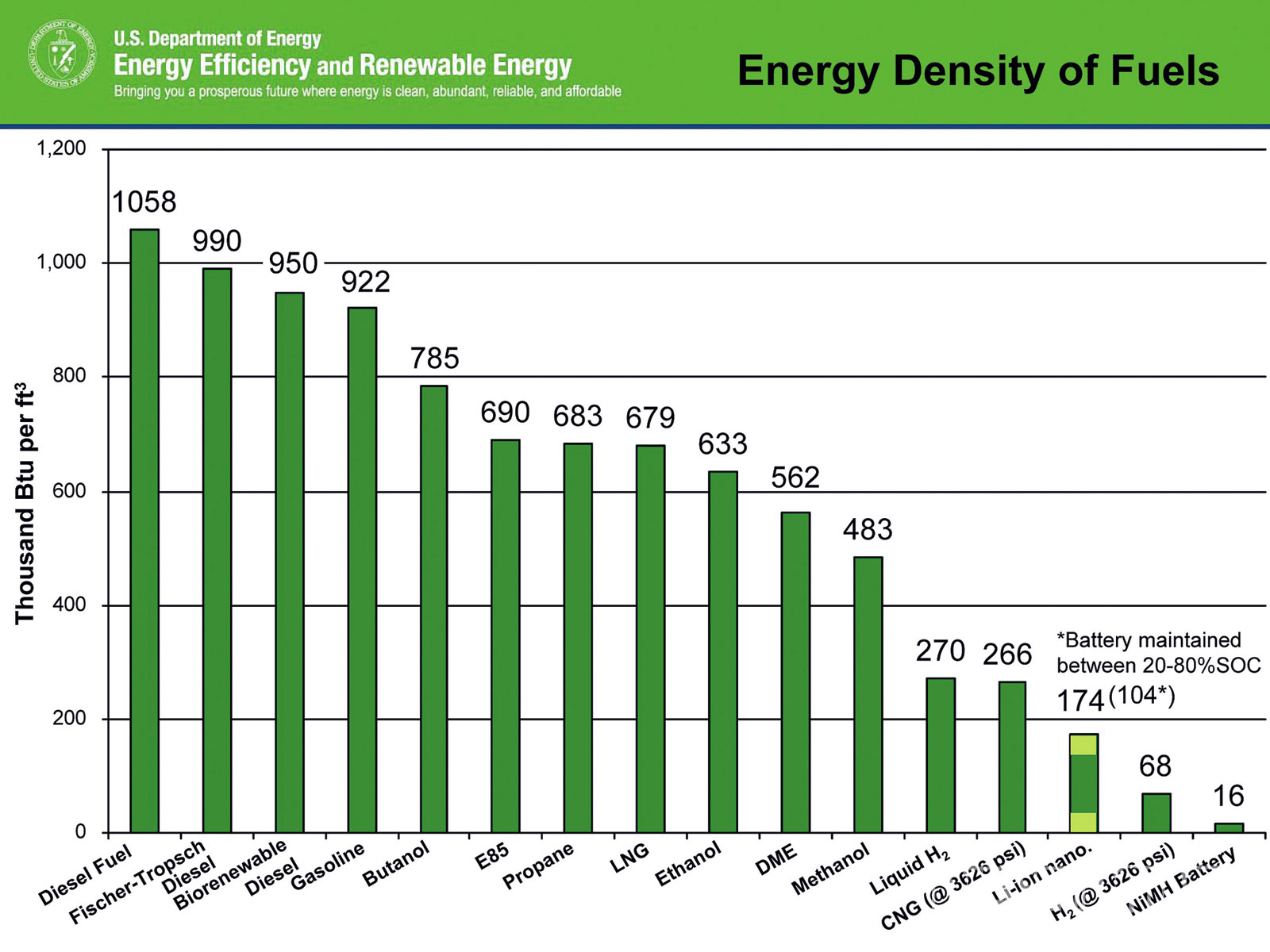 So, the main reason we don't use X for fuel and everyone seems to be so in love with gasoline and diesel is because for our current technology, they are just really, really efficient and packing a lot of power in a small space. Combine that with the fact that it's easy to store and distribute, and you've got a combo that's very hard to beat.

On the consumer side of things, we don't tend to notice this, as most places price things volumetricly — so much per gallon. In order to see the "true" price, you have to account for things like energy density and engine efficiency. In the end the price which matters is dollars per mile, not dollars per gallon. If you do the conversion, you see that ethanol (E85) is consistently around 20% more expensive (on a per mile basis) in the United States.

But the lower energy density of ethanol doesn't automatically kill the calculation. You can see this in places like Brazil. Brazil has a substantial number of ethanol-powered vehicles. There isn't anything special about the ethanol in Brazil which increases its energy density. The main thing that's changed is that due to the large number of sugarcane plantations in Brazil, ethanol is much, much cheaper than elsewhere. Price of a fuel is a complex mix of the cost of production, the cost of transportation, and the local tax policy. What's the cheapest option in one place is not the cheapest in another, and people will gravitate towards whatever is cheapest locally.

If the cost per mile of ethanol were to become cheaper in the United States or Europe, then you'd see people switch over there too — even if that means they have to increase the size of their fuel tanks or fill up more often. (As evidenced by people switching over to electric cars, despite the comparatively horrible energy density of batteries. Electricity is much less expensive per mile than gasoline and diesel, so it can make sense to switch over if you can bear the more frequent re-fueling.)

You absolutely can use ethanol instead of gasoline and disregarding some fairly minor technical issues they are more or less interchangeable.

The issue is one of supply. We have the capacity to produce a reliable supply of gasoline from petroleum extraction which has a well established infrastructure for production and processing.

In a fuel context 'alcohol' generally means 'bioethanol' produced by the fermentation (or an equivalent industrial process) of plant products. The problem is that this puts fuel production potentially in direct competition with food production and the same applies to 'bio diesel' from vegetable oils.

There is also an energy requirement in turning the low concentration alcohol produced by fermentation (equivalent to beer) into a useful fuel by distillation.

One thing that has not been mentioned here is not only the density but also how efficient the combustion engine is.

For instance--why do we not use electric heaters for entire homes? Because it's 4 to 10 times as expensive as using some form of gas. Electricity is 'cheap' for appliances like a computer--but it's very inefficient in terms of cost when it comes to cooling/heating. Hence why we usually only use electricity to cool, since combustion doesn't exactly cool off things :).

For the most part the main driver of why we use a certain type of energy source for any application is it's a) cheap based on cost + efficiency of engine involved b) convenient and safe given the application.

But it's really important to consider the engine. Efficiency is a measure of say you put in 1.00 units of fuel in, and you get only .80 or so units of work worth of that fuel out of the engine. And nobody's really come up with anything that beats the combustion engine for small-scale applications.

Not the answer you're looking for? Browse other questions tagged engine-theory gasoline or ask your own question.

5
Does the a gasoline or diesel engine supply fuel at high speeds when not pressing the pedal and more
19
Why did Ducati decide to use the desmodromic valve train rather than a more tradition valve train?
20
What is regenerative braking and why don't we use it?
8
Why is the effect of a bad fuel pump more noticable at higher speeds?
5
Why do some engines use both TPS and MAP sensors?
29
We have fuel injection, why not air injection?
1
Mystery White / Gray Dust on Motorcycle Gas Cap