Disc brake damage, how can it happen?

During this i told them there was a horrible grinding noise comming from when i was breaking, even a metal on metal screech sometimes??

They told me that a stone... got lodged in the brake pad and caused a lip in the brake disc.. so they skimmed the disc.

The problem is the noise is still lightly audible,, like a grinding away when i tap the brake. It brakes fine it is just worrying.

Now in school, when we had geology during geography classes, or physics even.. it is said that only a harder material can scratch or damage another softer material.. ie A diamond will scratch/cut glass and wont ever damage ever.. because it is the hardest natural mineral in the world.

So is it true that a stone.. lets say they hardest available stone on a public road can damage a disc brake causing a LIP like groove in a solid metal disc?

OK I went to an independent high street service garage that specialise in tyres,brakes and exhausts. They did a "safety inspection" for me but obviously I pointed out to them a problem with the brakes. 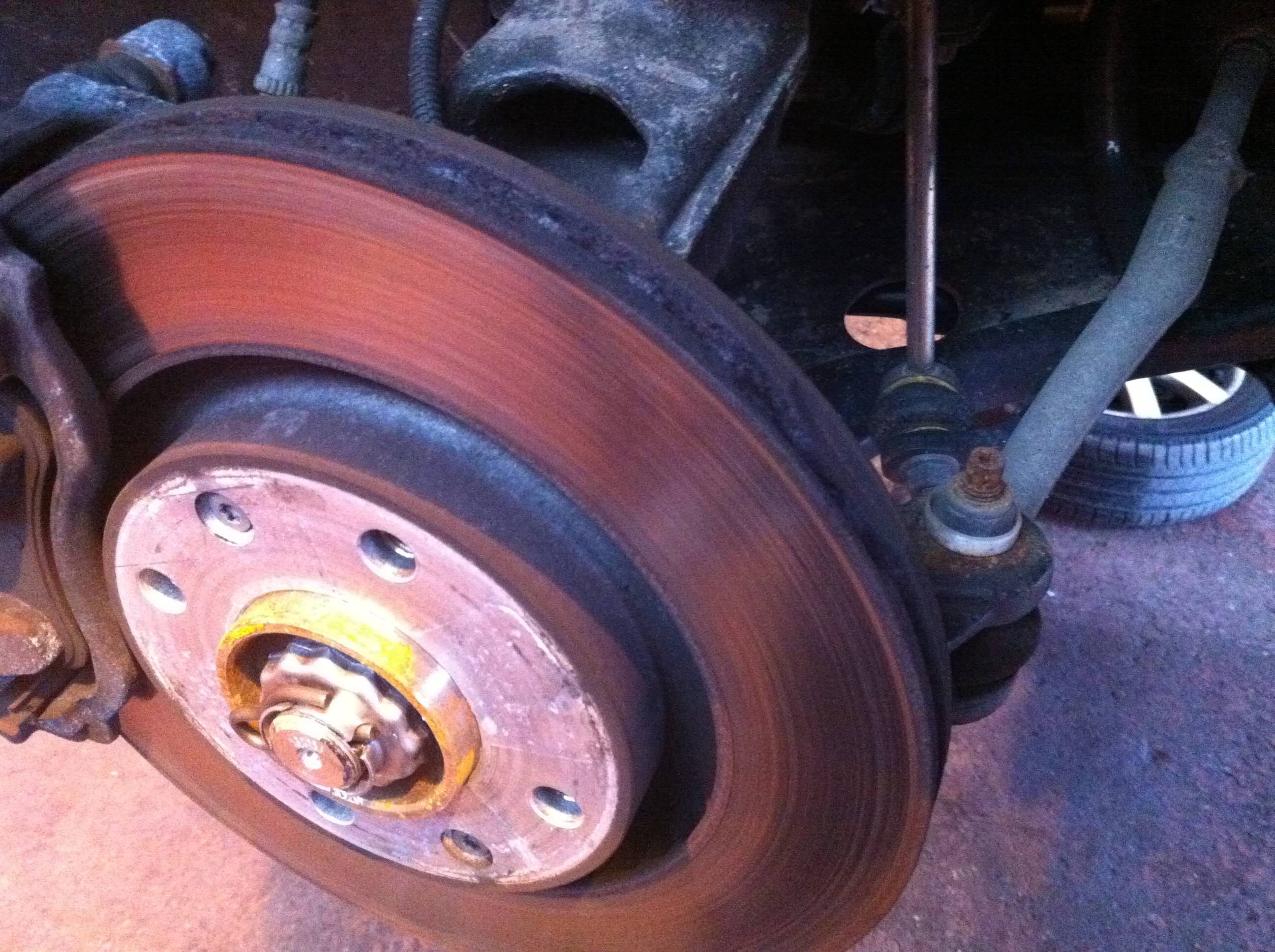 The front look OK, unfortunately i had not taken pics of the inner sides.. and on both sides they are grooved pretty bad...

They officially wrote on an inspection printout that their inspection reveals that there was no skimming done to the brake disc rotors (in fact one guy told me he used to work for the dealership and they don't even own a skimming machine... besides.. he added, you don't skim discs on new cars any more.. wow...)

The car is like 4 months old.. look at all that rust.. they obviously saving on galvanising bits.. its a joke...

I wish this article get published as much as possible to proove to everybody how dealships pull wool over unknowing customers. I never told them i have years of experience with cars.. and they blatainlty lied to my face.. in my eyes and over the phone. It has jsut become natural to them.. If they told me the truth I would have jsut sold the car after its warranty and never bought a piece of sh** peugot again. 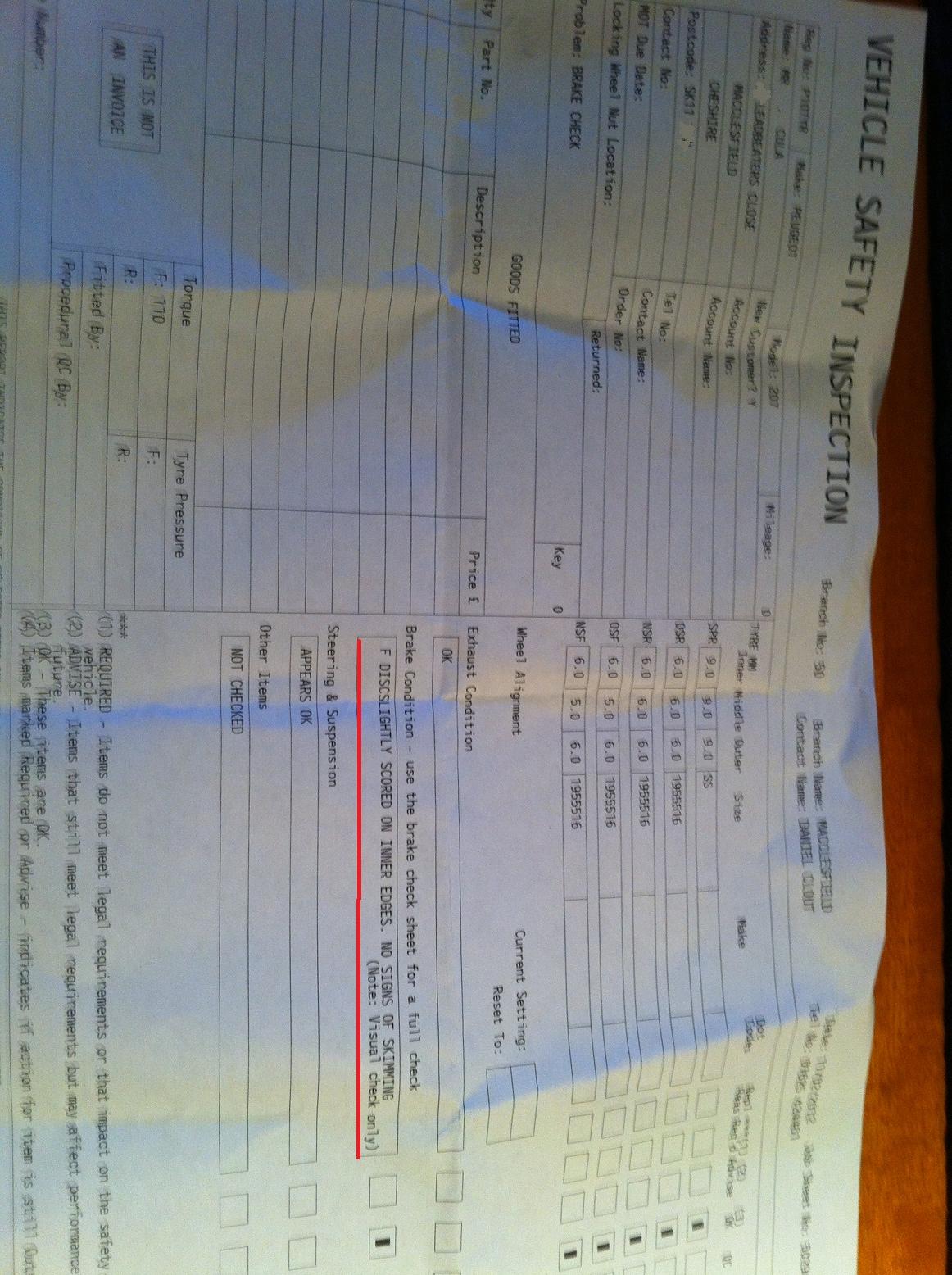 Well, yes, it's possible because it happened.

Remember, your rotors aren't made of diamond. Worse, they're spinning rapidly and the brake pads are pressed into the disk with tremendous force. As a result, if you have the bad luck to get a particularly robust stone, nail or other debris in under the pad, it will machine away the rotor as it spins.

With respect to the remaining noise, you might want to inspect your rotor after it has had a chance to cool. Can you still feel a groove in the metal? Or is it possible that there is still some debris or a rough spot in the pad? If it's just the pad, you should notice the sound fading over time as the pad abrades.

Very true. I run my cars in dirt/gravel events and the rotors get pretty scored up from gravel working its way in between the pads and rotors. It makes horrendous screeching noises too. :-)

The Brake Pan particle theory is true but one other thing with the screeching sound: It could be that the Brake Pan (round pan behind the rotor) could have been bent at some time either by hand or by a stick or debris in the road that got kicked up and possibly hit your Brake Pan and closing it in closer to your rotor thus creating a metal on metal sound.

Not the answer you're looking for? Browse other questions tagged brakes peugeot or ask your own question.