I have some questions regarding the alternator testing procedure outlined in the 98 US work shop manual ( this is related to my battery warning light question ), my car has the FS engine: 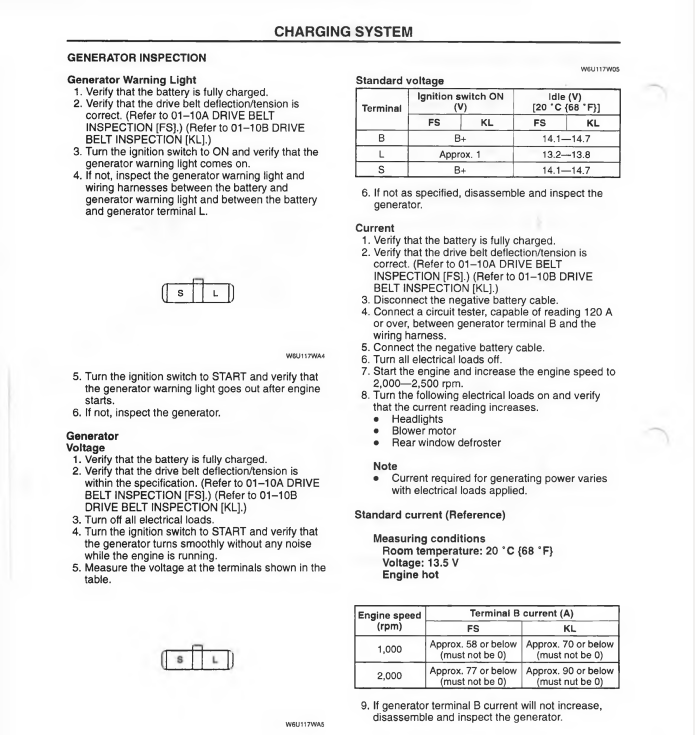 When it says to test voltage at terminals S and L, is it correct to assume it means to disconnect "Connector 2" and then test between those pins on the alternator side and the negative battery terminal? But if they're disconnected there won't be any current flow because voltage is tested in parallel to the circuit, so that doesn't seem like it'll work. So maybe I need to probe where the wires insert at the back of the connector and the negative battery terminal?

Another problem is that the 97 European WSM lists different voltages on these pins:

The problem here is that my car is a 98 GF, which is the European / International model, so I'm not sure which voltages to go with.

The European GF models ( or at least mine ) use a Mitsubishi alternator FP34 A2TB0191 and voltage regulation is done by the ECU via the two pin DP connector.

You'd backprobe the S and L terminals with the connector plugged in. So attach one end to a ground point and the other to the S or L terminal. Basically the S terminal is the Field terminal. The S wire gets power from the eng inj fuse and should have 14+V while the engine is running. The alternator grounds the L terminal when voltage is below threshold and turns on the battery light.

As to the Euro voltage chart I'm unsure.

Not the answer you're looking for? Browse other questions tagged alternator testing mazda-626 or ask your own question.

14
How to determine exactly what's wrong with my alternator?
8
Battery Light Won't Go Off Since Changing Battery

6
Cranks, but No Spark and Can't Connect to the ECU
14
How to determine exactly what's wrong with my alternator?
4
Is the diagnosis from a battery/starter/alternator tester meaningful?
3
Are my alternator brushes too short and what problems do short brushes cause?
5
Electrical Issues — possible alternator
3
Knock on 2000 Mazda 626 after replacing the alternator
2
How much accurate car cigarette lighter port is?
2
How can a battery indicator be on when the alternator is providing adequate voltage?
5
faulty alternator problem?
1
Bad alternators?