What is this thing hanging from a wire from the front headliner at the top of the windshield?

Had my windshield replaced last week, and then this week this black rectangular plastic thing dropped in front of me. Held in place by a wire attached to it going under the headliner - length of wire about 1". The thing is about 6-7" long, 3/4" high, 3/8" thick, more or less. It had been held in place on the inside of the windshield by double stick tape. This is a 2015 Honda Accord V6 with no add-ons (Lojack, etc.). (It does have standard collision detect and lane departure warnings. Doesn't have adaptive cruise control.) 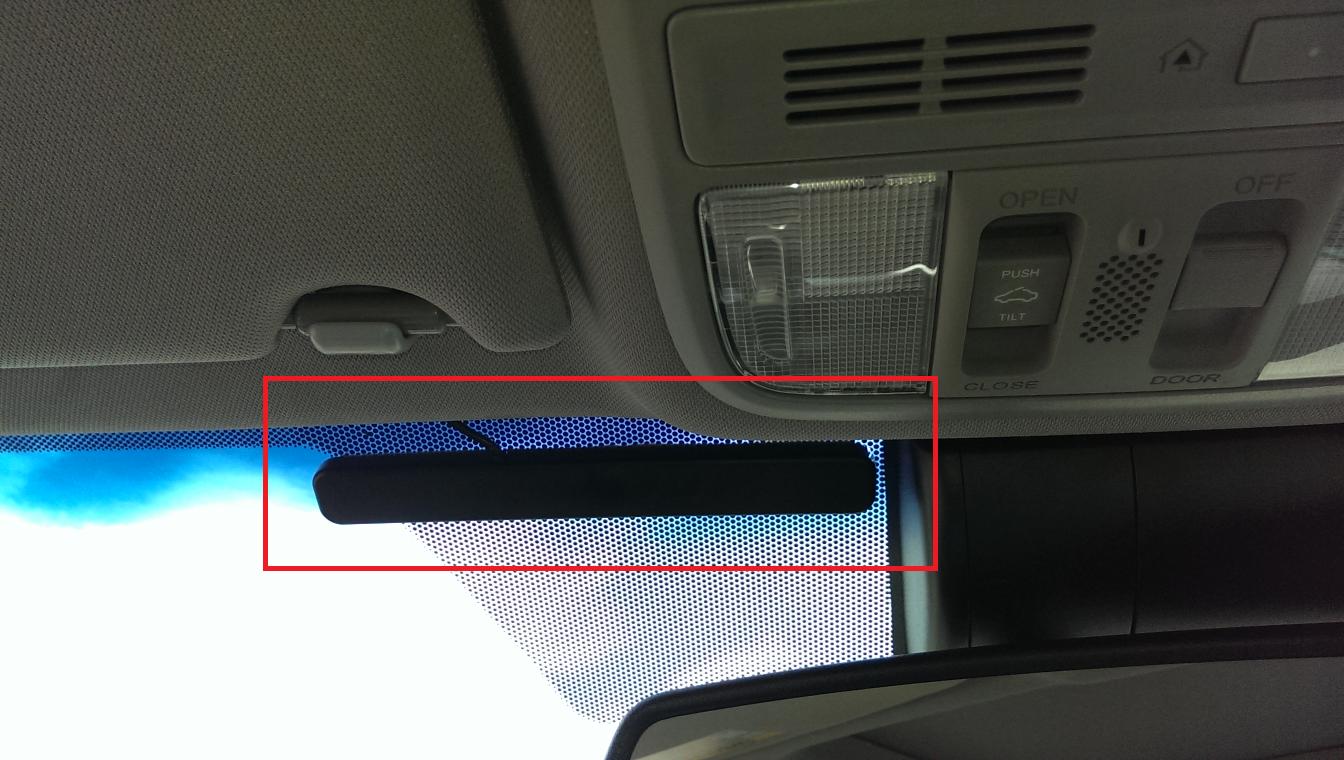 (In the picture above, I've stuck it back on the windshield with the double stick tape. You can see the wire above it going under the headliner, this wire is about 1/8"-3/16" thick.)

I honestly believe I had never seen the thing attached to the inside of the windshield, ever - I've had the car a year. (But if its original position was shoved a bit higher against the headliner it would have been pretty much out of my sight line, and from the outside it would have been difficult to see behind the tint.)

Went to the Honda dealer and asked "what is that thing?" Stumped everyone, including the service manager (a long-time Master Technician). We couldn't find one on the inside of a showroom Honda Accord. He spent 30 minutes with me looking through (computerized) service manuals at various components - mainly antennas or sensors - and couldn't find it anywhere.

Based on those manuals (and his knowledge) it doesn't appear to have anything to do with XM radio, the collision warning system, the lane departure camera, the nav system's GPS, or anything else we could think of.

His only suggestion: Whatever it is, it was something that was supposed to be wedged between the headliner and windshield, and it dropped out when the old windshield was removed, and the windshield tech didn't know what to do with it after he replaced the windshield so he just taped it in place.

So .. what is this thing? Is it a Honda component for some purpose or other? Or did the FBI covertly install it to track me for some reason? (*)

P.S Reason I want to know is: The car is leased. I want/need to return it the way I got it. So if the thing is supposed to be under the headliner I need to go back to the glass vendor and have them redo it correctly.

Figured out it (thanks to a shove in the right direction by @mikes): It's the remote engine start accessory's antenna.

I didn't think of it when I was asked if I had "add-ons" because it's an official Honda accessory (that I can't do without!) installed by the dealer before taking delivery.

I went back to the Honda dealer and got a copy of the installation instructions. (32 pages. To install the thing you first remove the roof console/sunglass holder, the sunvisors, the driver's door opening seal and driver's A-pillar trim, the driver's dashboard under cover and lower cover, a self-tapping screw from the rear trunk lid and fuel fill door opener cover, the driver's door sill trim, the driver's kick panel, the (steering wheel) column band, the upper column cover, a self-tapping screw on the lower column cover, and finally the lower column cover. Now you can install the f-ing antenna and you're only on page 13 of the instructions! You've still got the control units and wiring harness to go... No wonder this accessory, with installation, was so surprisingly expensive!)

Anyway, it's actually supposed to be installed on the windshield up flush against the headliner - but not under it. That's out of my sightline as a driver for sure - and probably any reasonably sized driver at that.

If I ever get the energy I'll peel it off and reattach it (with new tape!) in the proper place.

6
Honda Accord 2005 Headlight relay location
7
What's this part? Hanging from left rear of Subaru 99 legacy.
2
Weird OBD2 error on newer Honda models
2
Brake Pads - Wagner ThermalQuiet 537
0
What is this thing here?
1
the day after it rains, 2015 Honda Accord leaks water outside and inside the cab
1
Misfire on Cyl 2 & 3, but doesn't (exactly) match TSB