Can engine oil type cause a car to overheat?

I own a Peugeot 405. At first I was using 20w-50 engine oils but The last time I went for changing the engine oil I used 10w-40. After that The engine temperature rises constantly and (even when it's cold outside) and after the second fan starts it'll cool down immediately.

I check radiator water constantly and refill it if needed.

I don't think so

I've had many experiences with strictly oil cooled engines. In particular the 1986 Suzuki GSXR 750/1100 platform.

They went strictly oil cooled with a giant oil cooler and 8 quarts of oil. 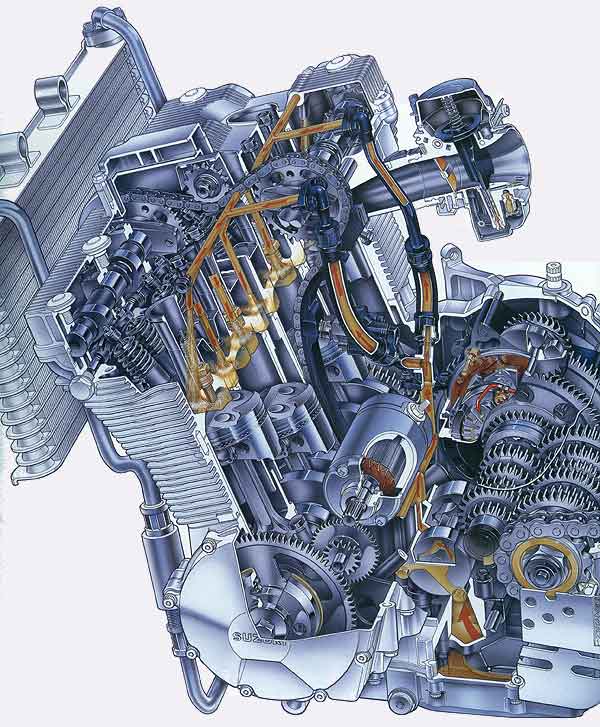 As you can see, this motor is filled with oil galleys and has no coolant or radiator.

Another note, I live in the desert of the US Southwest where temperatures exceed 120F in the shade during late June to August.

Certainly, comparing this engine to your liquid cooled modern car platform might seem ludicrous but at the end of the day taking the motor I am talking about to a track and running it a very high RPM's in desert summer heat and not detecting a difference in cooling is pretty meaningful.

I check radiator water constantly and refill it if needed.

If you are needing to refill your coolant on a semi-regular basis I suggest you focus on your actual cooling system.

I haven't added coolant to my 2013 Toyota Truck for at least 6 months and I'm sure I'll be able to get to summer before I add a little to the reserve reservoir.

The only place where I expect direct interaction between oil and the cooling system is the oil-water heat exchanger.

I don't know if your 405 has one (some oil-coolers use air instead of water) but if it does have one and the 10W-40 runs hotter than 20W-50 (I don't know how to verify this), this might explain the hotter temperatures seen in the cooling system.

The level of oil will definitely make an engine run hot (how full is it?). If you are having to regularly add water to the radiator, you should check the oil quantity and condition at the same time. I'm very skeptical that oil viscosity would make a noticeable change in engine temperature all other things being equal.

Not the answer you're looking for? Browse other questions tagged engine oil engine-theory oil-change overheating or ask your own question.

7
What exactly is meant by "engine coolant"?
13
Car stalls/dies suddenly while driving and is not starting again
4
Is the procedure for an oil change different for a turbocharged engine?
4
Engine hot, radiator cold
9
How long should I wait for engine to cool down before I can check coolant?
1
Car engine temperature maxes out, then lowers and stays stable
1
Empty radiator, engine temperature fluctuating