Are expensive high-brightness 55W headlight bulbs worth the investment?

We've all seen them, bulbs advertised as brighter than the rest, sold under big names such as Philips or Osram. The flag is carried by Osram Night Breaker Unlimited and Philips X-treme Vision. Information floating around online tells us these bulbs simply have thinner filaments. They apparently illuminate the road better at the expense of a shorter lifetime (often significantly) and a price a of a few lower end bulb sets. Numbers are usually advertised in percentages - +110%, +130%, etc. more light than some "standard bulb".

However a peek at the datasheets of Osram lights tells us something else - the Osram Night Breaker H7 bulb actually has the same luminous flux (1500lm) as the regular Osram Original H7 bulb. At the same time reviews online state otherwise, most buyers are happy with the extra illumination provided. Couldn't find datasheets for Philips bulbs, but one of their official retailers advertise the same information - 1500lm for all Philips H7 bulbs.

So what gives, how do manufacturers make their bulbs illuminate the road better if the luminous flux is identical? Are the high brightness money sinks worth buying at all or maybe this is just a huge scam to sell some shorter lifetime bulbs at outrageous prices?

Any insight into this topic is appreciated.

Apparently according to ECE Regulation 37 all H7 bulbs should have a luminous flux of ~1500lm. As I understand bulb manufacturers must conform to this standard, so the figures are correct. Then the question is how do they make their bulbs illuminate the road better without increasing the luminous flux? Do they at all?

Well, a car headlight will have a certain amount of lumens produced but that's not what you see. What you actually see its the brightness of that light (lux) which basically is the intensity of light relative to the projected area from a surface. Its a bit weird to explain because even if you read the classic definitions they all seem the same thing. To put it in practice lets say you are in a garage with dimmable lights, you turn ambient light down and turn on your headlights, then you slowly raise the room light and the beam that was visible in the dark at one point slowly disappears. The headlight is still producing the same amount of lumens but for your eye it will be harder to perceive its illuminance because its being drowned by the ambient light. Now if you were to fit one headlight with the OsramOriginal and one with the NightBreaker, theory says that you should be able to distinguish the latter even when the ambient light has drowned the first because of an higher lux. The color has is impact too as a "whiter" bulb will give more lux.

I left a picture from the net just for some visual comparison between beam of different lights. Another I had in the answer I deleted as it seemed to me just a marketing doctored image, like a lot of the images I considered, others would have been a pain to add here. What I was looking for was an actual controlled test of a few different bulbs with proper measurements, maybe from an automotive magazine, but up to now I have not found it. The closest I found is this http://www.which.co.uk/cars/driving/sat-navs-and-car-accessories/best-car-headlight-bulbs/ but while they mention how the test was performed it appears they publish the results but not the measurements proper which would be the actual useful part. 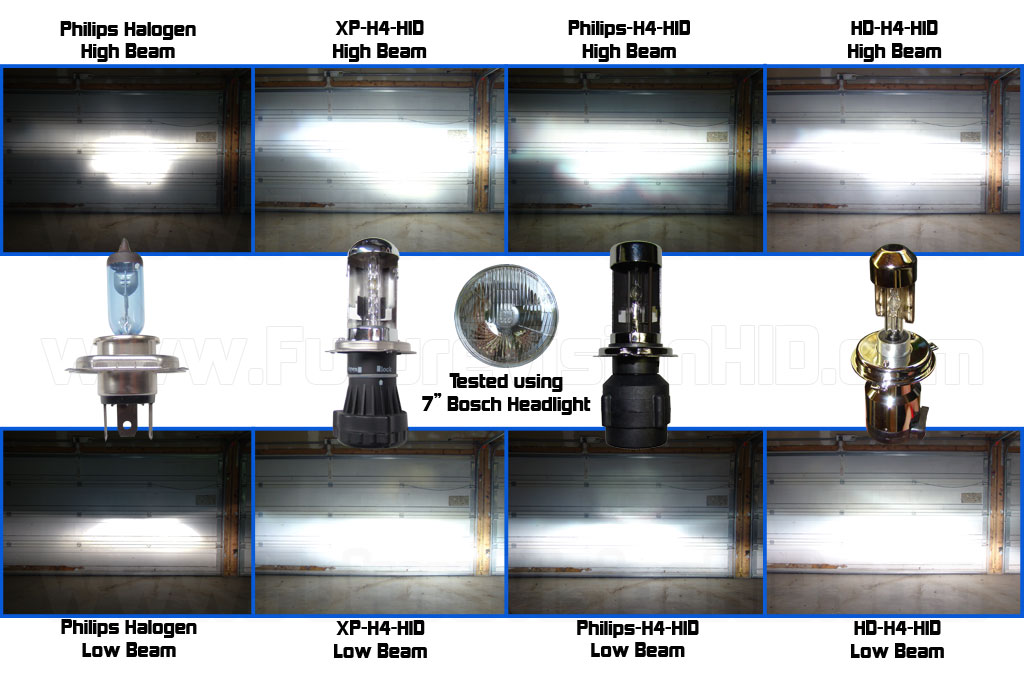 Before deciding to go with a brighter bulb one should first check that the light beam is projected where is useful and that the existing bulb isn't old and tired and that the headlight glass isn't all oxidized and fogged up. So users reviews often are a bit of a hit and miss as indication if you don't know how they were driving before.

Personally I always have the impression that with the brighter bulbs I can see less of whats outside the light beam and I don't like them. Others I know instead have as much light as a spaceship in front of them and would still go brighter if they could.

A word on regulations: if you look at how an headlight is designed not all the light is directed towards the road, the whole beam is designed so a certain percentage of light is thrown higher up. If a light is above limits then even the amount of light high up increases becoming dangerous for the others on the road. Headlights that were designed for Xenon bulbs for example would throw the extra on the road but the amount of light higher up is the same than the conventional lights (legal) they often have an automatic regulation of the tilt depending on the load for the same reason. In some countries you can have a car born with Xenon headlights and they are perfectly legal even if above the general Lumens indication because they are designed to throw the light in the right way and they are self-leveling, while any aftermarket kit is considered illegal. So even there Lumens don't tell the whole story. (And, beside everything, some bulbs rated at very high lumens waste so much heat that can actually damage plastic headlights apparently)

Edit, to try to explain things further: When you measure the power of a light source you have various ways to measure the light that is emitted by it.

One way to express that is the Candela which basically is the amount of light emitted in a tridimensional area. It doesn't care about distance from the light source or how wide is the area illuminated. The angle used is a steradian which is the way solid angles are measured and in practice covers an area of 1m2 on a sphere of 1metre radius, A full sphere has an angle of 4π steradians (and at the end its just a fancy concept we don't care about since we wont have to do any calculation when buying a lightbulb)

You have the Watts that are what people is most familiar with and it was how we expressed the power of the old house light bulbs. Watts in itself mean little as it is the amount of energy required to emit a certain amount of light and now that there are different choices from the old plain household incandescent bulb, efficiency has increased so the energy used is less related to the light produced. That's why now Lumens are something we use more often.

The Lumen is the light flux a certain source emits. As such if you take a flood light and you put a reflector that narrows its beam you end bringing (reflecting) more light in a narrower cone increasing its flux instead of wasting it in directions you are not interested in. It does relate to the angle of the beam produced and as so its basically becomes a measurement of how many Candela are thrown within a certain angle and so its measured by multiplying the Candela of a light by the angle in steradians. So 1lumen = 1 candela steradian, it doesnt matter the distance its measured at.

Then you have the Luminance and the Lux, these are the measure of the light emitted, for the former, or reflected, for the latter, by a surface. Since we don't actually perceive the light moving through the air but we are aware of light as a reflection by everything that surrounds us, these are more related to the light brightness we actually see. These measurement actually take distance in account, they don't care of the angle of a cone of light or its intensity per se, If you want you can consider them as a measure of the results of all the defined above as they will indicate how illuminated the target surface is and its what changes when we say that one headlight is brighter than the other

If someone wants to spend a couple semiboring hours some more in-dept explanation can be found here: http://www.intl-lighttech.com/support/measurement-geometries-chapter-7-light-measurement-tutorial

I found in CFR (Code of Federal Regulations) 49

That being said, I believe the stated brightness component of advertising may be a bit misleading as the verbiage could not reflect deviation from regulation.

I place a lot of value in creating a bright landscape before me. Albeit I may be a little bit more concerned as I ride a motorcycle in rural areas frequently and being able to see a deer or other large herbivore ahead of me can have lasting consequences.

I typically use offroad H7's in my motorcycle that do not need to conform to regulatory standards. Perhaps I shouldn't admit to breaking Federal law here but consequences be damned, I do it.

I've done HID lamps, I'm not happy with the ballast setup and find the whole system klugy, I don't use them anymore. I found reliability to be a factor. Perhaps it was my installations that were poor, I have to take that into account.

Here is a video comparison (a little cheesy) between 80w and 65w off road bulbs.

I've also used these offroad bulbs and have been happy with them on my MC.

Hope this helpful in some way.

Keeping your headlights clean seems like a better investment. Even a thin layer of dirt (salt spray seems particularly bad) both blocks light and scatters it away from the road (possibly into other drivers' eyes). If you don't wipe the crud off your headlights you're wasting your money of the bulbs.

To give an idea of how quickly it builds up: I've got better things to do than clean my car frequently, but winter commuting on damp salted roads meant I was wiping the lenses every couple of days (~50 miles) on an old commute for a noticeable effect on the light levels.

The idea is that the bulb and the optics of the headlight work as a system and that the bulb filament is a point light source at a set position in space in the headlight. When headlights are designed, the engineers compute the path of light rays from this source through the optics of the headlight. This is why HID or LED bulbs do not generally work well in a headlight that is designed for filament bulbs producing glare for others and poor illumination hotspots. Their light source is in the wrong position. Even Philips Ultinon LEDs which are the best yet are not ECE or DOT road legal. Cheapo filament bulbs produce less light and consume the same power as standard OE bulbs because they don't position the filament in the headlight accurately.

Premium bulbs get better light output by positioning the bulb filament more accurately than standard bulbs and also the filament is more compact than a standard bulb. The downside is the filament runs hotter and will have a shorter life, but the brighter light is a safety advantage.

Clean headlight lenses and good condition reflector surfaces are very important to light output. Old style sealed beam units were popular to stop the reflector becoming dulled by being dusty or oxidized. A dry microfiber cloth is a good way to clear out the accumulated dust from the inside of the headlamp. In an older car you may see a marked improvement just from doing this.

Not the answer you're looking for? Browse other questions tagged headlight bulbs or ask your own question.

6
What are the brightest bulbs for projector headlamps?