What are these dots on my roof?

I'm currently in the process of restoring an older car (a 1988 BMW M5, in particular) after it sat in a driveway in the Pacific Northwest for ten years, waiting on an engine rebuild.

My paint restoration process more or less started with rubbing compound. After getting the initial fog off, we noticed these dots underneath it: 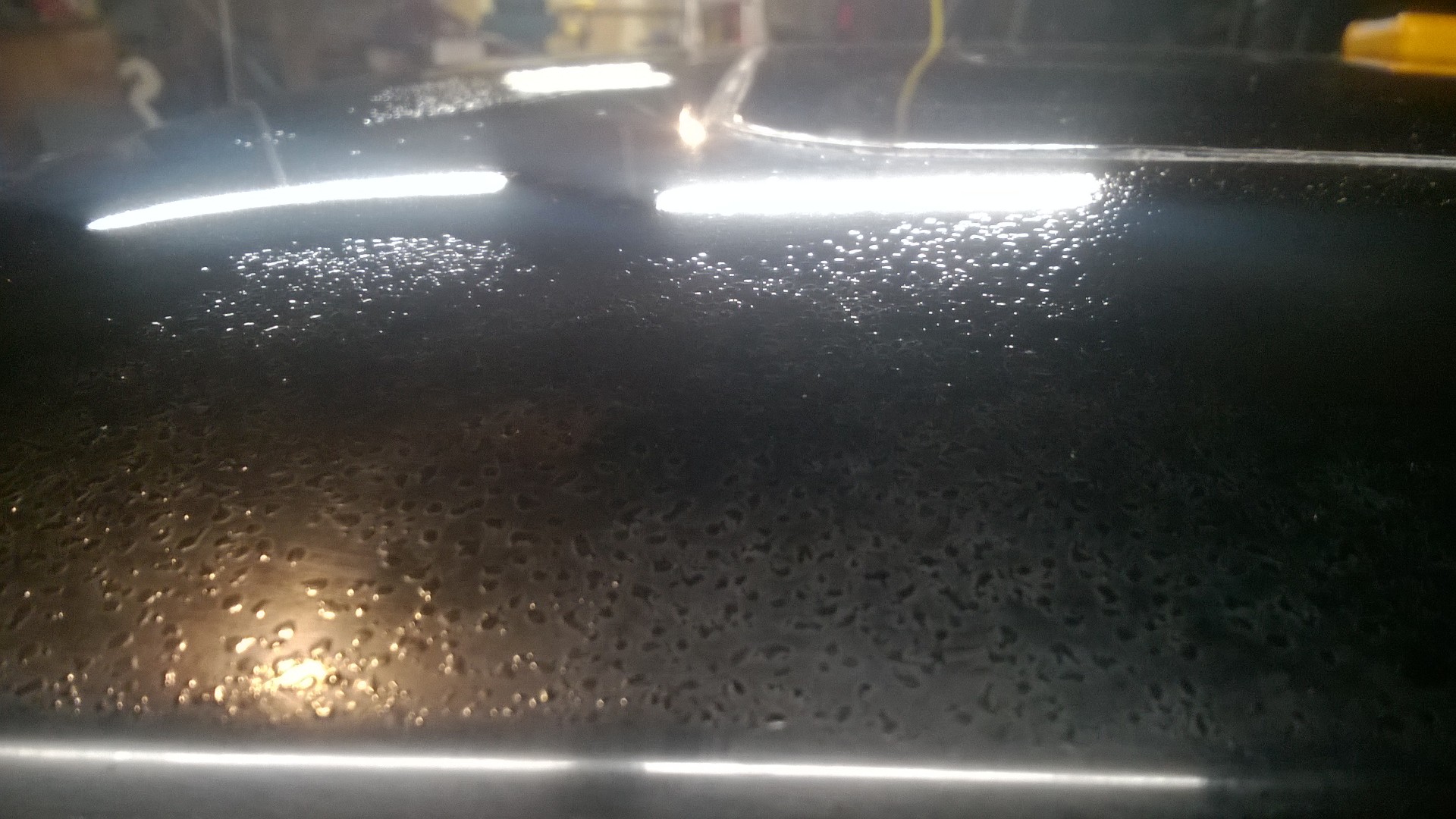 They aren't the end of the world, but they're quite visible when light is shining on them.

They show up in clusters over the roof, and most clusters cover just a few square inches, but they seem pretty evenly distributed across the whole roof. There are probably ten such clusters.

I've only checked the roof so far, but it's my assumption that they'll show up all over the body of the car.

I assume they're caused by weather of one sort or another--it saw rain, sun, snow, you name it--but is there anything I can do to get them to go away? Or at least, anything to make them a bit smaller?

I'd live with them sooner than I'd get it painted, since it still looks good and there are better uses for that money on the car, but I'd like to make it look its best.

To the idea that it could be rust, that was definitely my initial reaction as well. That said, I thought it was weird that: 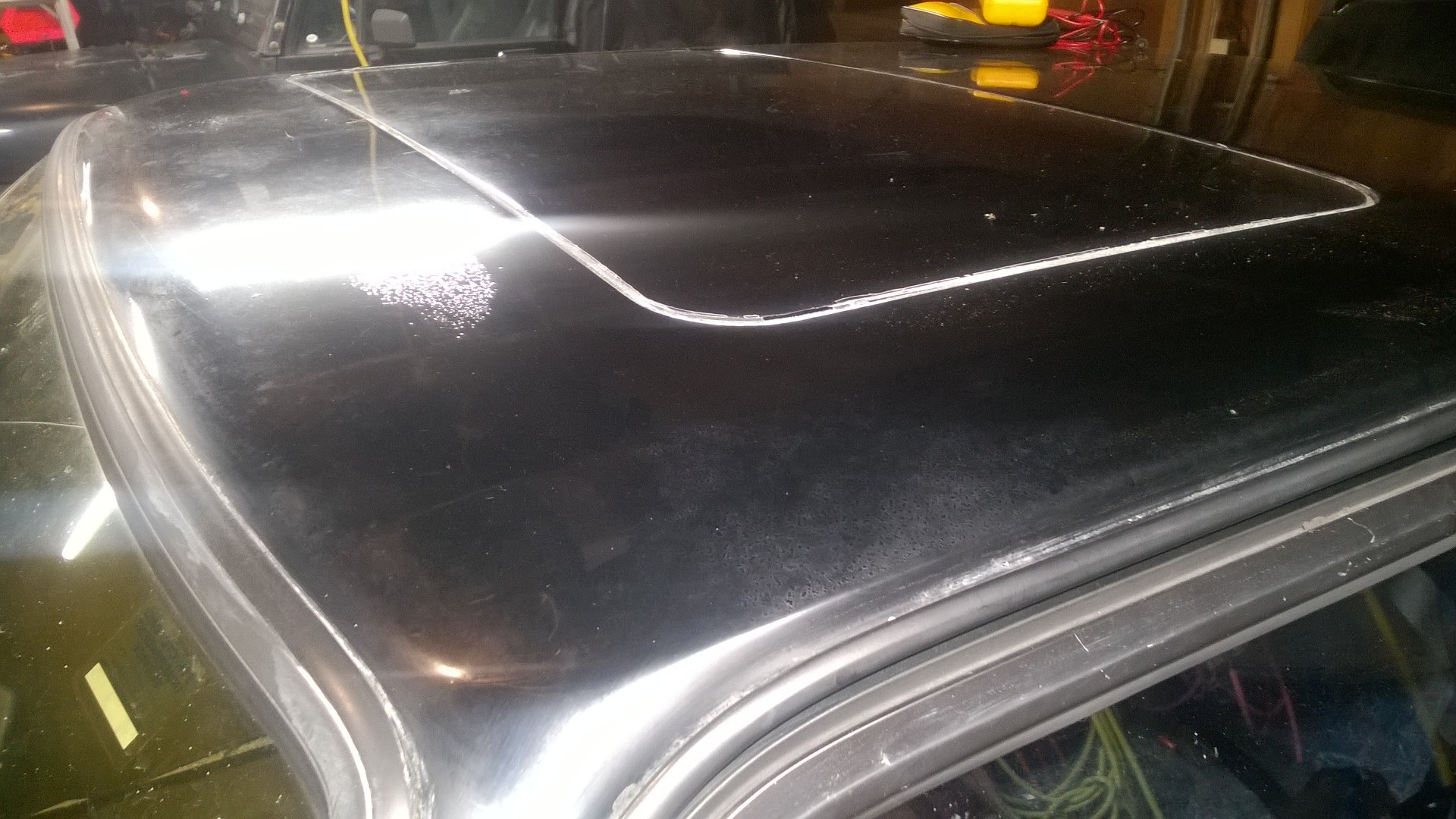 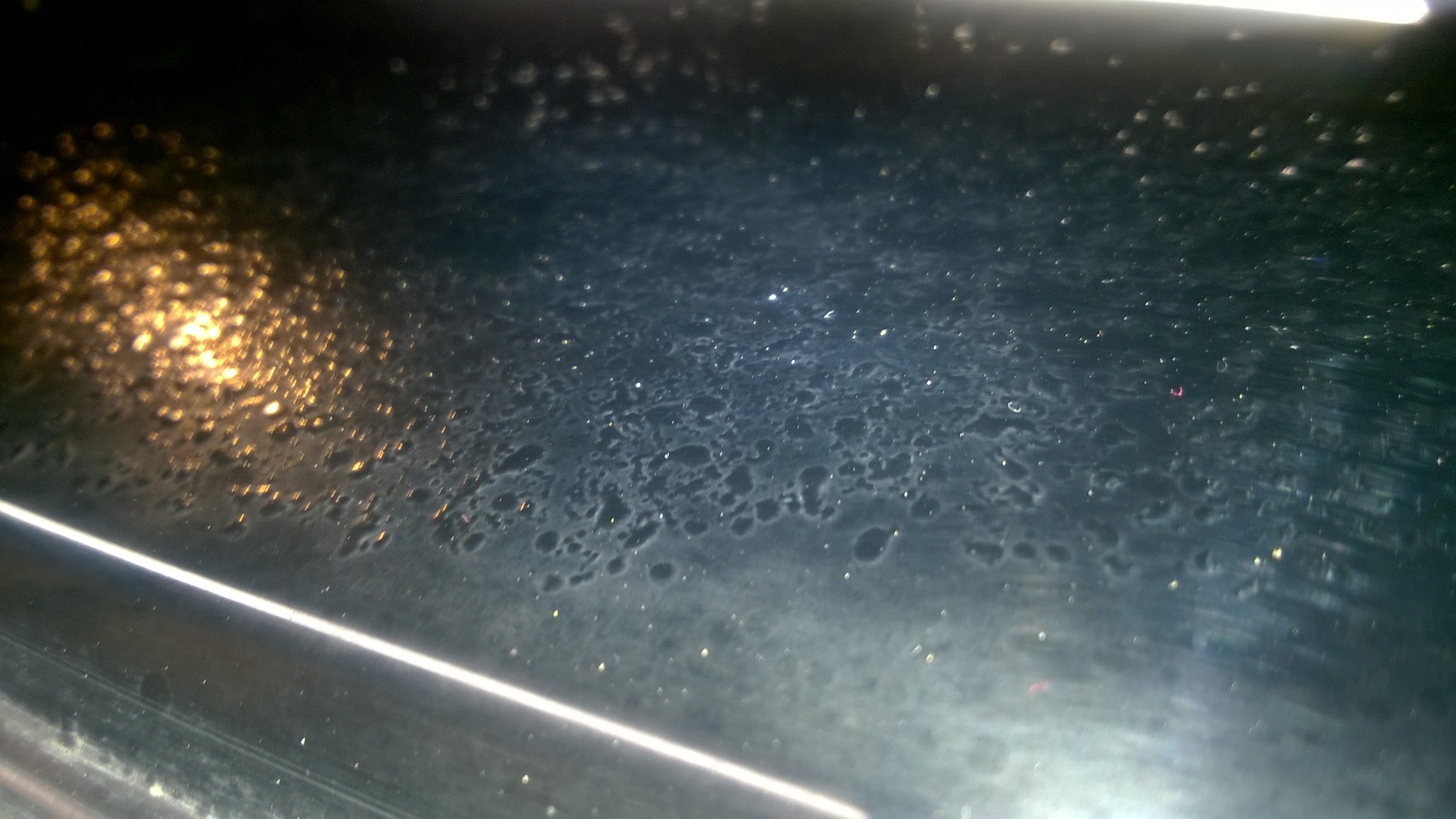 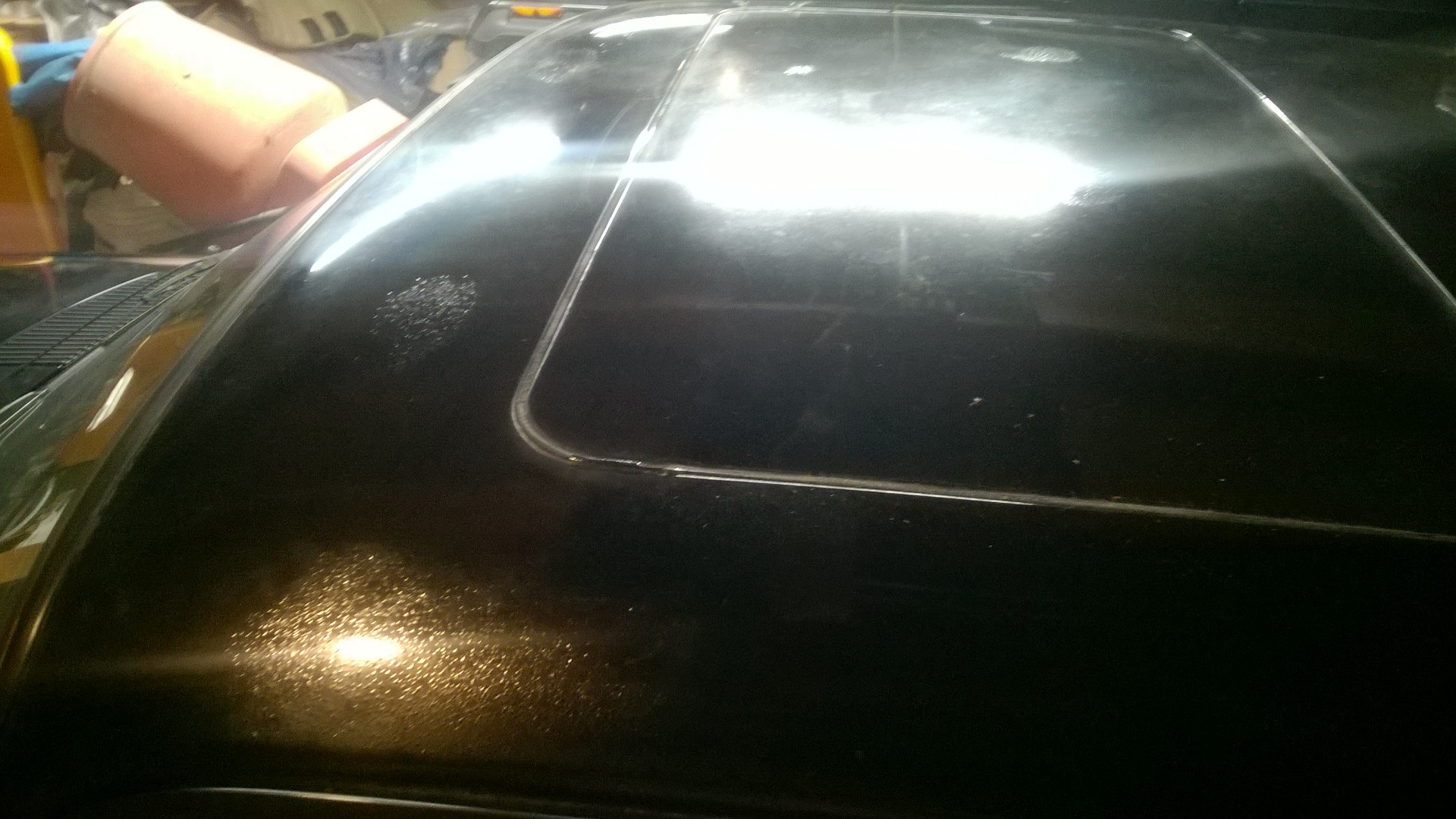 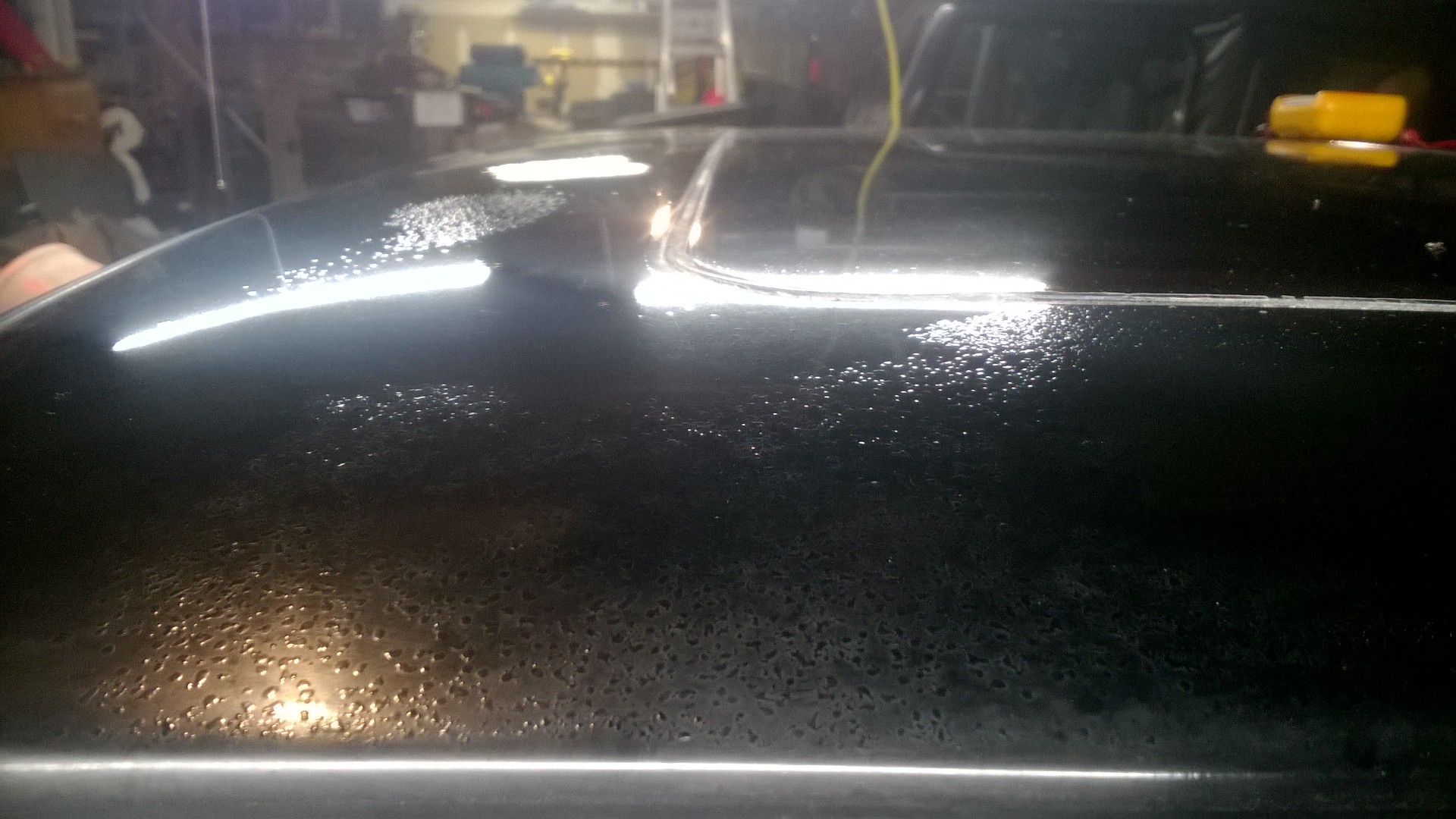 So, following advice by a couple comments, I popped one of them open with my knife. It was brown inside, which seems very rust-like.

However, I'm still not convinced! The pattern is so strange for rust, and the paint's in such good shape with this exception.

I found the idea of sap really compelling--the car has been sitting under a tree for the better part of its time outside, and these "clusters" could have easily been caused by dripping. It also explains why I can't find any such marks on the doors, and potentially why there's only one on the bonnet (over which tree coverage was less).

As for the idea of it being clear-coat coming off, I'd believe that. Although the paint is in really awesome shape everywhere else (sorry to keep saying that--I really like this car), so it seems a bit curious that that would be a problem. Not to mention, it's not bubbling. I don't know if that's what clear-coat would do, but I'd assume so. I can't move the dots at all, and even pressing them with my knife felt like metal-on-(painted)-metal.

However, I can't ignore that what I found in that one was probably rust. Whether that was a cause or effect, though, I'm still not sure.

And for what it's worth, on the matter of it being rust, it can be really difficult to tell, but as far as I can, from getting close and looking, I'd really swear that these are under the paint, not on top. I can't think of how anything could have gotten under, without coming up from below (there's no sign of that from inside, but one never knows).

Listed above, but for those following along with edits, I've uploaded more photos to an album on imgur. Please don't hesitate to request more if anything would help! I'm only limited by my own lack of creativity--happy to take as many as might potentially be useful.

It's more than likely the clear coat, and not rust. Here's why.

Temperature change is one factor. The clear coat can sometimes expand differently than the base coat. Areas where snow get piled on can be a factor, as well as sections that get heated frequently, ie. hood.

Acid rain can breakdown the chemical bonds, and the above separation can occur.

"Solvent popping", this typically does not happen on OEM paint jobs, but on repaints. When there is not enough dry time on base coats, or flash time on clear coats, this can occur.

Mixing chemicals. If you use materials that are not compatible with one another, this can happen as well. This is a primary reason why people suggest to purchase from the same family of products.

While there are probably more causes, your best solution is to sand it down and prepare the surface to finishing.

It looks like rust that has begun to form under the paint or something failing with the clear coat. You may have to sand it down and refinish to fix this and keep it from getting worse.

Not the answer you're looking for? Browse other questions tagged paint restoration or ask your own question.

3
is a visible paint seam on the roof-top ok?
9
Roof paint peeling badly, with rust -- what to do?
1
Car touch-up paint... HELP!
3
Can I spray paint a engine's heat shield?
4
What are these black tiny dots on the roof of the car?
10
How major are these paintwork & rust problems?
2
Does a cracked paint blister corrode faster than if grinded?
0
Best paint to paint windshield wiper arms?
2
What would the result be of re-painting a slightly rusting door?