What are the characteristics and uses for desmodromic valves?

In an answer to another questions @Ceshion introduced a fascinating kind of valve train that I have never heard of, desmodromic valves, as introduced by Ducatti. That answer is here:
What are the various kinds of tappets / lifters and the advantages / disadvantages of each

and here is the image she provided as an example: 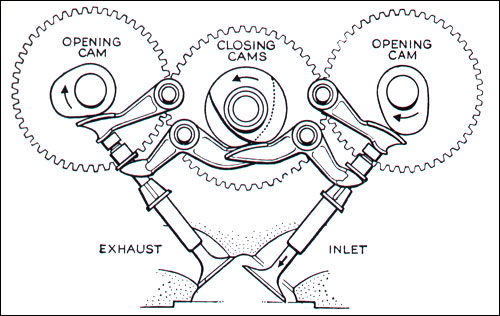 Here are the specific questions:

The high revs means so much more power, there have to be down sides to this for them not to be in use in a lot of places.

I can actually answer some of this question as well. There are other companies that use them, while Ducati is the best known. Ducati uses them in their racing as well as streetbike engines. Mercedes Benz is another company that uses them, namely in F1 engines. The theoretical limiting factor, the best I understand it, is heat and friction. There's no practical reason to work the engine so hard as to reach those limits. They are somewhat less reliable, due to the complexity and number of parts that need to stay in sync, and power delivery is similarly less reliable. There are, in fact, springs in most desmodromic valve setups, they just aren't used for cam following. They are, however, used to reduce slack in the system, as can be seen in the following:

This also shows an alternative setup to what I described in the other post, in that this example uses the same camshaft for both opening and closing the valves. They are adjusted with shims, labelled in the diagram above. This is what makes them such a nightmare to service, since there are two clearances on each valve that interact with each other.

Now for what I don't know: I'm not sure how the oil pressure needs compare to conventional valves, but keep in mind that in most cases as engine RPMs go up, so does oil pressure. So it may be necessary, yes, but it may also be produced somewhat automatically as a byproduct of such high speed. Also, I'm not really sure how potential valve sizes compare, however I haven't personally seen a huge difference in valve sizes between desmodromic and conventional setups.

Are these only used in motorcycles, if not, where else is this used?

No other manufacturers of motorcycles currently leverage the desmodromic system.

Given the complete lack of valve float, just how high can these rev?

What is the next limiting factor in how high they can rev?

Perhaps a shorter stroke with larger valves and less reciprocating throw in the valve will allow the next increment in RPM. Currently the intake tract is reaching the speed of sound which imposes issues of back pressure and stalled air pockets within the intake tract. The current GP15.X and GP16 RPM's numbers are, as of yet, unpublished by Ducati but speculation has them at 20K + RPM's.

How much more or less reliable are these than the usual modern valve train setups?

The have more moving parts, we can surmise that reliability is tied to simplicity. My own experience with Ducati Desmodromic valve trains professionally has been very good. Statistics for failure rates are not available but I believe we would see that they have an overall lower tolerance to long term stress cycles than a standard under the bucket shim valve train that is used in most high performance modern motorcycles.

Are these restricted to racing or are there street applications for these?

Ducati uses this valve train in all of it's production and racing vehicles.

Given the lack of valve float, how much bigger and heavier can the valves get to allow more flow and more power?

I would defer a response from a mechanical engineer as the mathamagic get's pretty complex surrounding the stresses at such high RPM's. Additionally, all of the weight and angle information would need to be published to answer this question.

Does anyone but Ducatti use these or are they patented by Ducatti?

No other manufacturer currently uses this system. Mercedes used them in F1 in 1954 and 1955. Ducati has patents on various components but this design goes back to steam engines in late 19th Century.

Here is a fairly comprehensive list of of true uses of a desmodromic systems in internal combustion engines.

Older two valve Ducati SR2 engines suffered from increased wear with particular poppet valve angles. Current and legacy platforms use a helical spring on the negative rocker to prevent bounce and seal the valves properly upon closure. Here is the modeling on a Ducati design.

Does a system like this require higher oil pressure to prevent premature wear as the revs go higher?

Oil pressure tolerances on modern platforms are within normal smaller rocker arm designs of the past.

19
Why did Ducati decide to use the desmodromic valve train rather than a more tradition valve train?
10
What are the various kinds of tappets / lifters and the advantages / disadvantages of each

4
Should I lap my valves if I have easy access?
2
Can you change HP by adjusting valves?
19
Why did Ducati decide to use the desmodromic valve train rather than a more tradition valve train?
21
What is valve float and how does it impact engines?
10
What are the various kinds of tappets / lifters and the advantages / disadvantages of each
14
How over-square can you go?
2
What should the idle speed of an engine be based on?
8
Evans Waterless Coolant
1
Should valve pair open and close at same time?