Here's the back story. MIL illuminated with codes P0440, P0420, P0404. Around this time, I noticed a gentle mechanical rattle/plinking on acceleration.

So, I replaced the gas cap, drive cycled, and MIL illuminated with same codes. I visually inspected system (lines, manifold, etc). Nothing obvious.

Replaced the carbon canister, drive cycled, and MIL illuminated with only P0420. Progress.

I am no expert. This is my first experience with the P04xx series codes. I'm reading a bunch online and going into two shops for expert advice.

The dealer and independent both suggest replacing the cat at this point. That's an expensive operation ($1430 for Toyota part), one that I'm not convinced is the best move. From what I've read, this is not a cut and dried code. From what I understand, if it started with P0420 and gas smell, the culprit probably would be a bad front side O2 sensor. That rich fuel could lead to a failed cat (combustion in the cat). But, because the original code was P0440, I'm dubious about a sensor or cat problem and am leaning toward it being a loose line or a failed gasket somewhere. I think the next step should be a thorough inspection of the evap system. Unfortunately, I don't have the tools needed for that.

Two days ago, I rescanned the fault codes. The reported fault code had changed from P0420 to P0440. See my other question on this.

I noticed today the fuel smell after the car sat parked for 8 hours. Before, I had only noticed it after driving. Ambient temperature 77 deg F, 55% rel. humidity, no wind.

Short and long term fuel trim are erratic this morning during city drives: 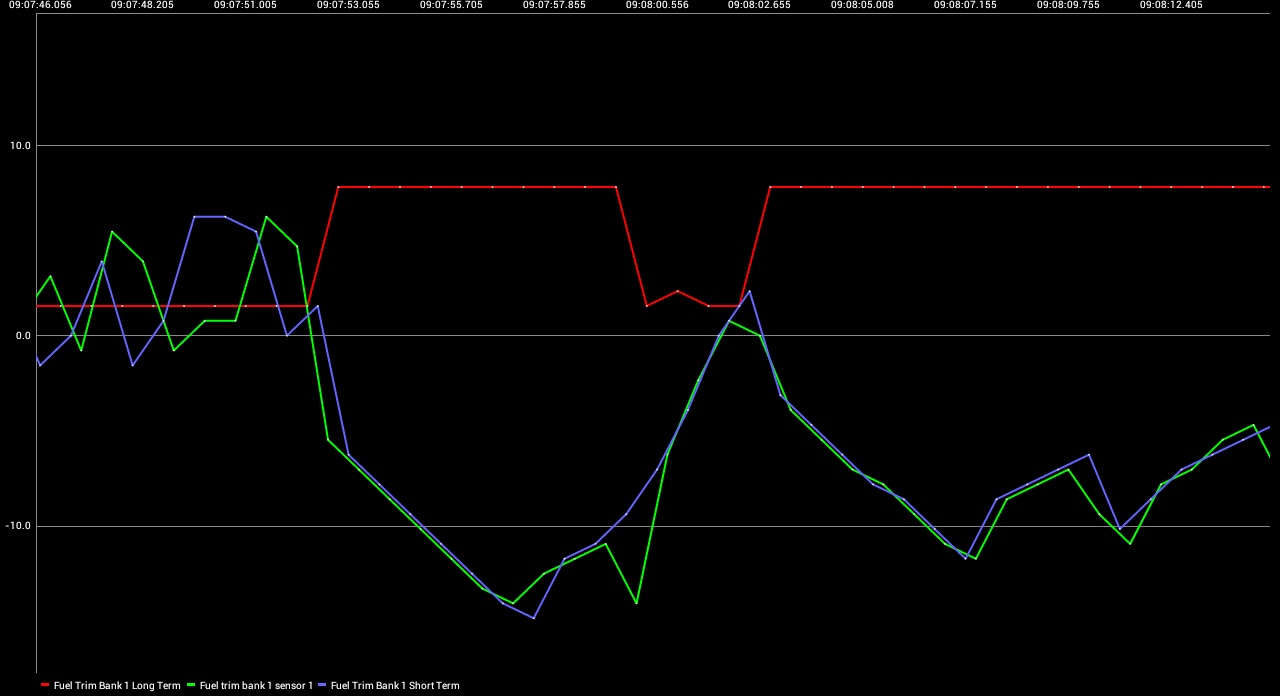 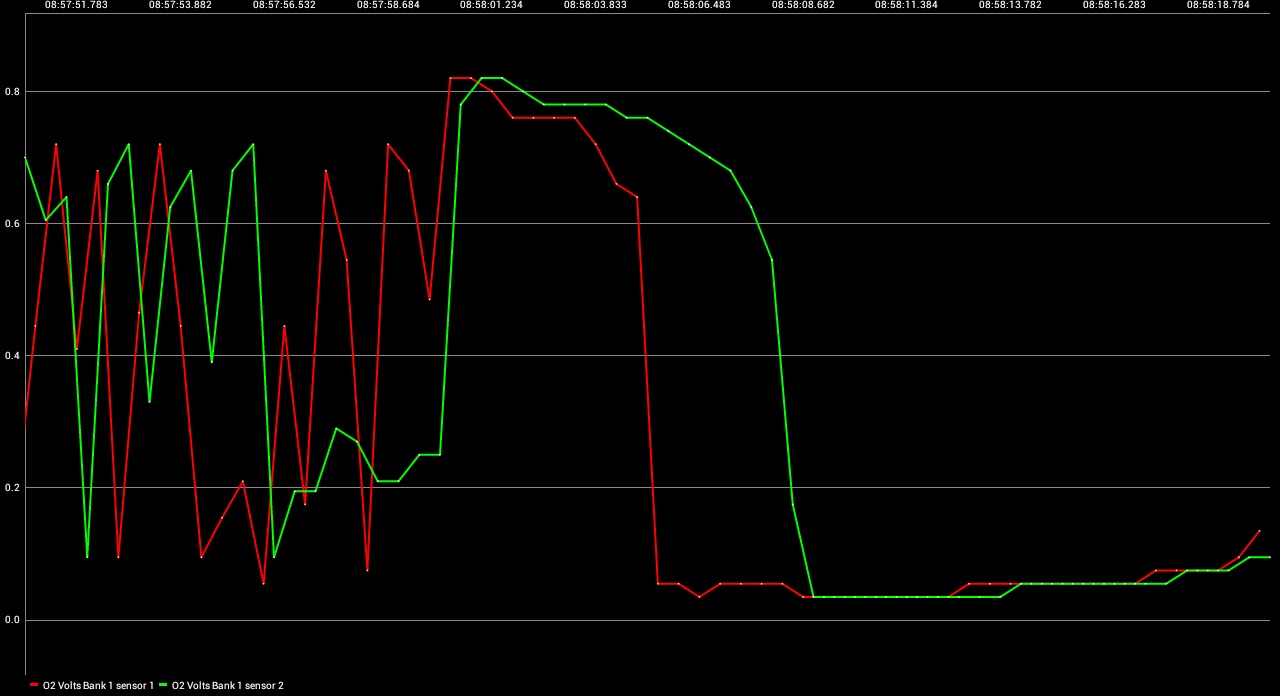 I will drive it some more and confirm these readings, but if my understanding is correct, rear tracking front usually indicates a bad cat. I still need to get under there and take physical measurements (temperature, resonance), but the heat shield looks undamaged.

I also used a rubber mallet for some percussive diagnostic. The chamber rattled when I struck it. I've heard this indicates the filament inside is corroded and disintegrating.

So the open question: what would have caused the failure? I don't see how either P0446 failures (evap vent valve or PCM) or P0440 failures (canister, purge solenoid) would poison the cat.

I know there is a tiny oil leak in the timing mechanism, but it's tiny. I can't see this having any effect.

Maybe I should mentally accept the "catalytic converter is old" answer?

If you have rattling on acceleration and the fuel economy is depressed, it is very likely that the catalytic converter core has cracked and it is blocking the exhaust now. You can try to measure its efficiency first by looking if the rear O2 sensor voltage reading after heating is steady (so the catalytic converter is good) or jumping (so it is bad). If it is too much trouble for you to do this test and you can remove the catalytic converter yourself just do it and inspect it to see if it is broken. Mind that some debris may have been flung into the muffler so it may also need to be cleaned or even replaced.

It definitely sounds like you have a serious issue with the catalytic converter and should have it replaced. Replacement with a universal converter should not be expensive. In expensive Silicon Valley (and air conscious CA) I got a replacement for $220 at a specialist shop.

However, the failure of your catalyst is a symptom of another issue and not a cause, as something clearly caused the catalyst to overheat, crack and fail. Once your catalyst is replaced, you should waste no time in determining if there are any other codes that persist (or newly appear) that indicate a root cause.

In my case, I had a P0171 (System Too Lean) that basically meant that the ECU detected a condition that causes the engine to misfire frequently, which heated up the catalyst beyond specification and caused it to fail. The root cause was an oil-covered Mass Air Flow filter which detected less air than was actually passing through the air intake. The oil came from a "performance" reusable air filter. Never again.

Also, the 1ZZ-FE engine is notorious for burning engine oil because of pistons that are too small for the bore but Toyota cheaped out and compensated by using larger piston rings, which wear down and/or stick. The burnt engine oil further poisons the catalyst leading to a P0420.

Essentially the technical meaning of a p0420 is that the downstream o2 sensor is detecting an inconsistency with fuel trim. Generally this is code is associated with a bad catalytic converter. Many things can cause this code, but usually the easiest ways to figure it out are testing it with a hydrocarbon analyzer. The dealership usually has one of these. If they don't, all you can really do is test exhaust back pressure which is the pressure created inside the exhaust before the Cat. If you detect that it's too high, this would indicate a blocked or damaged cat.

Cats have honeycomb filters inside of them, when they break they turn sideways or will even get stuck in the outflow pipe of the Cat.

I'm not too savvy with emissions data. However though, I met this guy at SEMA and he knows a lot about emissions systems.

Not the answer you're looking for? Browse other questions tagged corolla catalytic-converter p0420 p0446 p0440 or ask your own question.

0
Can faulty O2 sensor cause omission check engine light?
3
P0420 in a Prius
7
Erratic single fault code: P0420, P0440, P0446. Normal variance, or indicative of something deeper?
4
Does P0420 on a Vibe result from a pre- or a post- O2 sensor?
5
How could the code point to a faulty cat, when the O2 signals are normal?
5
02 sensor displays constant 3.3 volts, not a jagged waveform. 2002 rav4
0
How many catalytic converters does a VW CC 2010 2.0L Sport have?
2
Catalytic Converter Clogged, But with what?
1
Options? Stripped out Threads on a Catalytic Converter-Mounted 02 Sensor in California