Testing automatic choke on a scooter

My Peugeot Speedfight 2 is having trouble starting when cold.

I took down the carburetor and cleaned it. The spark plug is also pretty new.

I've read that automatic choke can be faulty but I don't know how would I test that. It is a choke that has an extending needle. I've read up on how choke operates but found only examples of air restricting butterfly valve chokes. So I'm not sure what the needle does in automatic choke.

From my understanding the needle extends and closes the hole when the engine is warm. So am I right in that I can remove the choke, try to start the scooter without it and it should start cold?

How the choke works

The choke of a scooter consists of a dedicated choke nozzle in the fuel reservoir and two narrow drillings leading to the venturi (the pipe where the air goes through): 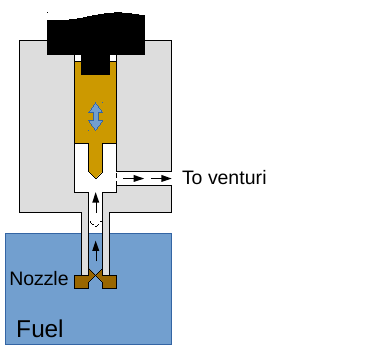 When the motor cranks and the choke is active, the slight underpressure in the venturi sucks in extra fuel through this drillings. When the choke is inactive, a piston (golden) moves down and closes the drillings.

In reality, the choke looks like this, and you can easily recognize the piston, which is the brass barrel with the needle: 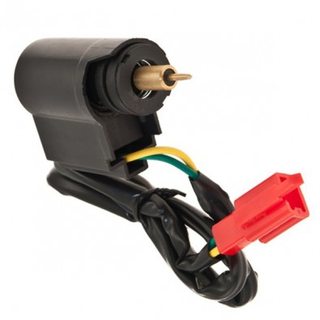 Inside the black choke body, there is a small cavity filled with a liquid like oil, and an electric heating element. When power is applied, the oil heats up and expands slowly, pushing down the piston. When power is removed, the oil slowly cools down and retracts the piston.

The choke is directly connected to the alternator, i.e. it only gets power when the motor is running. It takes several minutes for the piston to move from the "fully retracted" to the "fully extended" position, and the difference is really small, may be 5mm (1/5").

How to test it

To apply power, either take a ride or connect the choke directly to the battery. But note that the choke draws about 1A, which can drain a small 7 not fully charged / weak scooter battery.

The choke typically fails in two modes: Either the piston does not retract (choke always inactive) or it does not extend (choke always active).
And of course, it's also possible it doesn't get power...
Further more, it is rarely possible that the piston does move, but not enough. Then you would need to know the positions for a working choke.

Not the answer you're looking for? Browse other questions tagged carburetor scooter choke or ask your own question.

6
50cc Chinese Scooter GY6 QMB139 hard start when cold
9
What is the yellow precipitate in my outboard's carburetor?
3
Does opening the throttle mean a leaner fuel to air mixture for starting?
2
Can choke on a motorcycle compensate for dirty carbs without causing fouling?
2
Suddenly milage dropped and engine started working differently
1
how to start a older car with an automatic choke?