Rusted gas tanks, how do you repair them?

If I have an extremely old vehicle that has limited parts availability for replacement, how would I fix a rusted gas tank in order to put it back in service in a vehicle?

I've run into this issue a couple of times in my life and would like to hear procedures and effective methods to remediate this problem.

I have fixed many motorcycle gas tanks that are rusted, but never on a car.

Is a coating recommended for the inside of the tank?

How would I get all of the rust out of it?

I've used electrolysis with sodium carbonate to remove rust from smaller parts in a 65 gallon plastic container but the size of car gas tanks obviously makes this prohibitive. Here's the basic procedure I've used in the past for just parts.

Do you have a picture of the tank? If you have any holes, obviously you would grind, cut, weld.

White vinegar does wonders. Fill it up to the brim, add some change. Let it sit for days, preferably a week. As you drain the tank, shake it rigorously, the flakes will come off. If you need to do this again, you most certainly can.

Vinegar is a cost effective way to do this. Here are some results of what vinegar can do for you and all your rust removing needs! 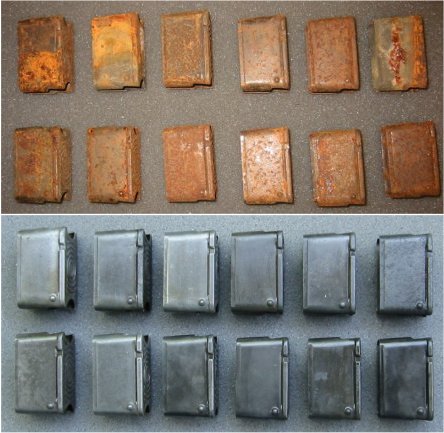 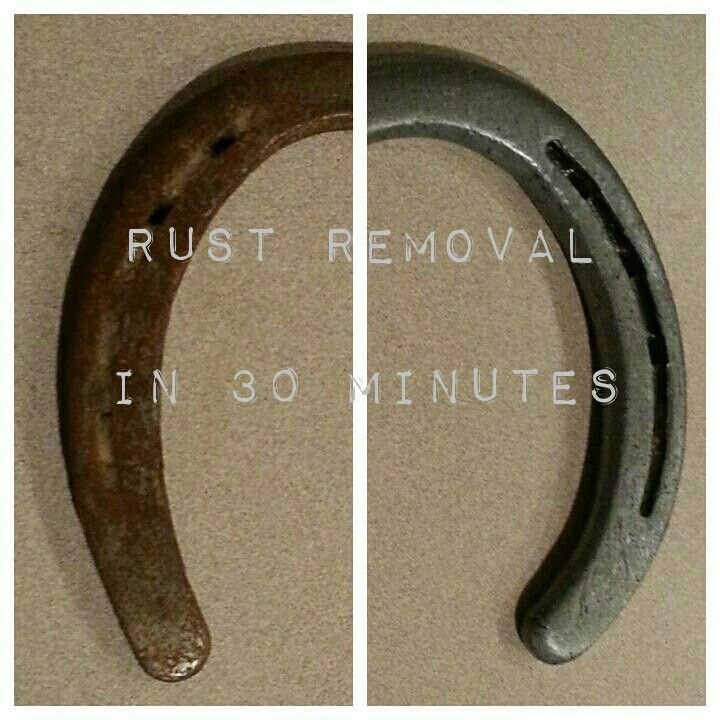 When you are done make sure to seal your tank. Caswell makes a great product. They also have an epoxy sealer that you can look at. 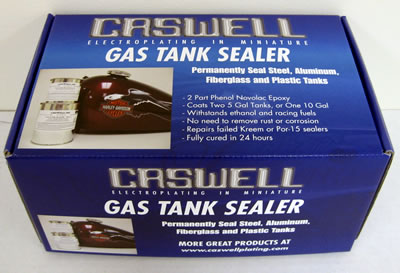 It seems the rust is inside the tank, right?

I'm not sure if the electrolysis method is the right one for a tank. First, the cathode must be placed inside the tank, because the tank itself forms a Faraday's cage, rendering a cathode outside useless. Of course, cathode must be isolated from the tank. And the cathode must have a reasonable large surface, which could also be difficult to achieve inside a tank. And as you should know, the mud on the cathode is just the minor part. There is even more mud at the bottom of the container. This mud will also build up in your tank, an where it is, it will restrain the process. And because it is partially metallic, it could form a short circuit between cathode an tank... Finally, the surface of the tank after the treatment isn't clean metallic, but you still have to clean it with a wire brush or similar. No idea how to do this inside a tank...

There are rust remover products out there, which really dissolve the rust instead of just converting it. I'd use those, though it may be quite expensive.

Whichever method you chose, they will leave the metal with a sponge-like surface, and you can literally watch it rusting again. Even gas will not protect the metal enough. So yes, coating the tank is mandatory, and requires a really clean surface. Zinc would be the best, but this is difficult to do. Maybe an absolutely fuel resistant 2-component paint?

Could you not use the same electrolysis technique but use the tank as both container and cathode? or would that not work?

Fuel tanks can be welded, as long as proper precautions are taken - fill it to the brim with water beforehand to purge it of all remaining fumes, and rinse it a few times... The water also has the advantage of showing you where the leaks are!

There are some sealants used to reseal the inside of a gas tank. Here is one that I know of.

http://www.por15.com/POR-15-Fuel-Tank-Repair-Kit_p_62.html I'm sure other paint companies have similar products.

Not the answer you're looking for? Browse other questions tagged repair tools rust or ask your own question.

4
How to remove rust from gas tank?
4
Repair or replace rusted rear wheel arches on 92 Civic?
16
How do I repair detatched interior roof fabric?
4
How can you tell when rusted metal brake lines should be changed?
7
What is a tap and die set and how do I use them?
2
How to repair and prevent holes in cowl panel
4
Use a torque bar when removing rusted bolts, to prevent impact driver from breaking them?
0
How to ensure I am buying an torx key for automotive repair?