Loud bang while driving, then lug nut is missing - what happened?

I was driving the other day - car (1998 Toyota RAV4, FWD) recently serviced, four brand new tires recently fitted - when I heard a loud bang from my front left wheel. I eased to a halt, thinking one of the new tires might have burst: everything looked fine, but one of the five lug nuts for that wheel was missing (the bolt was still there, looking dirty but otherwise fine).

What could have happened and how can I prevent it? I'm guessing something to do with metal fatigue? Makes me a little nervous about my other, normal-looking but probably rather elderly and abused lug nuts.

The tires were fitted by a mechanic at the same time as doing other servicing. I didn't check how tight the lugs were before driving (probably should have) but I checked the others after this happened, and they seemed fine.

When this happened, I was driving at a moderate speed (50mph?) along a smooth, straight road, and had been driving for maybe 3 hours on a hot but not unusually hot West African morning (maybe 32°C when this happened? Probably 24°C when I set out).

The only unusual thing I can think of is I'd underestimated a few pot holes earlier in the journey and hit them faster than I should (25mph-ish), shaking the car but causing no visible damage.

It's worth mentioning that some of the parts sold in car stores here probably wouldn't meet regulatory standards in places like Europe, so poor quality lugs is a possibility (though I have no idea how to check such a thing). 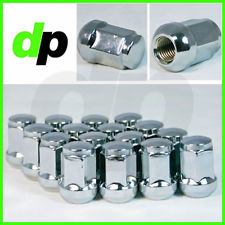 Image from eBay, note there's no reason to think these are the same brand, they just look similar.

And in the missing one, there was nothing left at all, just a bare bolt poking out with nothing on its screw thread. I can't find a suitable image and don't fancy removing a lug just to take one - imagine a bare bolt similar in length to these lugs sticking out from a hole in the wheel where the nut should be.

If it was the end sheering off, that'd be easier to understand, but the whole nut disappeared from the bolt.

As long as the rest are tight (and torqued to spec), I would put a new nut on and torque it to spec. Given that there isn't and left over metal on the stud, like the nut stripped out, I would say it wasn't torqued to spec and worked itself loose. The bang you heard might had been the wheel flinging the nut.

Not the answer you're looking for? Browse other questions tagged lug-nut or ask your own question.

4
Does a snapped in half lug nut stud need to be replaced if a nut still goes on?
2
Using different rim that what I have?
16
Is it safe to drive in race conditions with missing lug nuts?
9
Are there any risks if I use impact wrench to loosen lug nuts while the tire not touching ground?
3
Is it safe to use a lugnut with a different outer shank diameter?
4
How to get torque on frozen lug nuts on trailer?
2
$50 To Throw on a Missing Lug Nut
1
Is it safe to drive with spare wheel but with proper tire?
1
broken lug bolt - nut still on - can't remove wheel
2
Lug nut not fitting steel rim holes?