Do cars ever use electric water pumps?

I saw this question in the cue recently.

I know of no cars that are in production that use electric water pumps. I am assuming that it's continuity issue related to failure rates and engine damage risk.

I believe this question is directly related to the electric oil pump question but felt the desire to ask to validate any misplaced beliefs I have.

Does anyone know of a production vehicle that uses an electric water pump?

The W12 engine produced by VW utilizes both mechanical and electric water pumps (underlined with green). According to VW's documentation:

The cooling system of the Audi A8 with W12 engine is made up of the following components:

There are more details provided on the electric pump:

Continued coolant circulation is regulated by engine control unit 1 -J623 in line with a map.

Both the activation condition and the continued coolant circulation time are determined from the following parameters on the basis of an arithmetic model:

The activation condition and continued coolant circulation period are constantly calculated from the time of starting the engine.

For continued coolant circulation, the pump -V51 and radiator fan -V7 are actuated in parallel.

The maximum continued coolant circulation time is limited to 10 minutes.

Examples of activation condition as a function of ambient and coolant temperature: 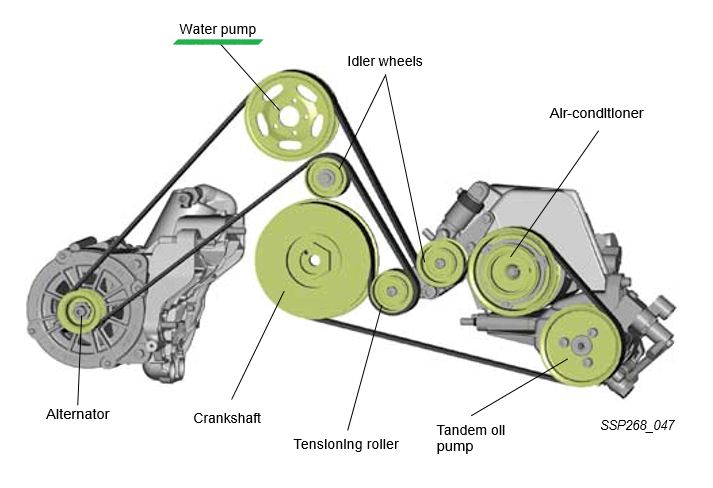 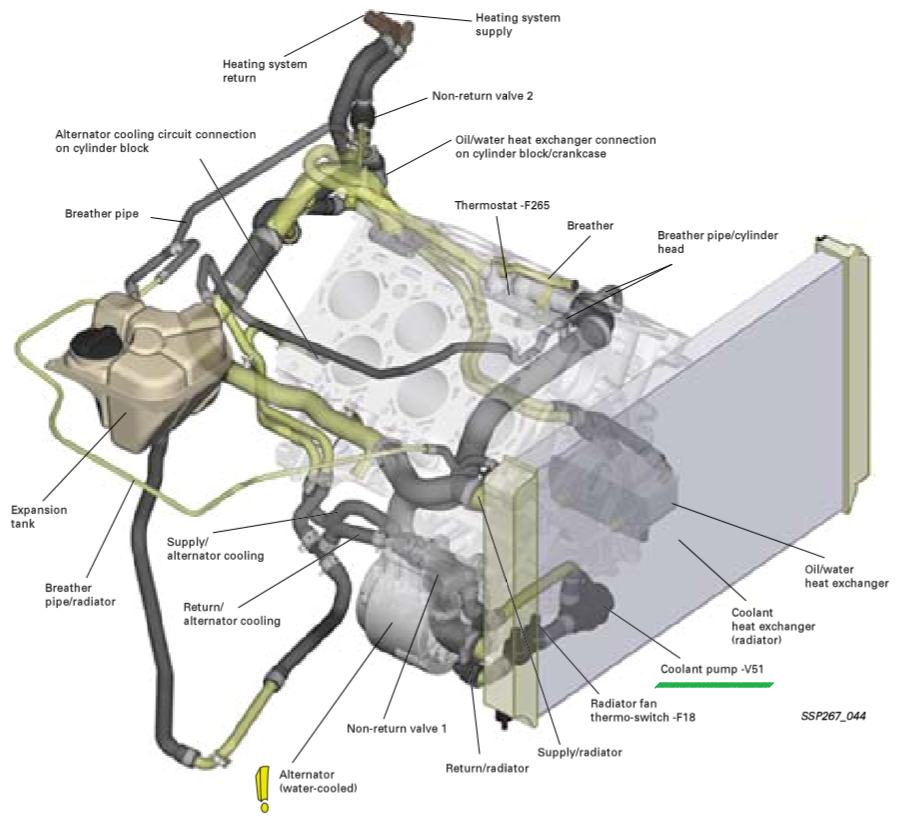 BMW abandoned their mechanical water pump in the 3 series when they moved to the E90 generation in 2006. The electric pump is the only pump. A quick search reveals that all other typical cooling system components (i.e. thermostat) still exist, so even when the engine is warming up the coolant circulates. This is probably to prevent hot spots which could happen if the pump just stopped.

There is a flow sensor for feedback so if the pump starts to fail the ECU can set a trouble code. E90 owners have reported low flow code as much as a month before total pump failure, but I'm sure reliability and failure rates vary by make/model just like anything else.

It seems there are two primary benefits to electric pumps:

Running with the engine off seems trivial for non-turbo and non-hybrid cars until you consider that most European cars turn off their engines if they come to a complete stop for more than a couple seconds to conserve fuel. The ability to circulate warm coolant through the heater core with the engine off becomes critical for driver comfort in cold climates.

In answer to the original question you asked, yes, I happen to know for a fact that the Mk3 Volkswagen Golf VR6 uses an electric water pump. The purpose of this pump is to keep hot coolant circulating after the engine has been shut off to prevent hot spots and heat soak causing damage. However, this is used in tandem with a mechanical pump which runs all of the time that the engine is in operation.

If you're looking for cars which use only an electric water pump, then I can't name any. This websites seems to imply that some modern cars have abandoned the mechanical pump altogether but doesn't name any specifically. I could quite believe that some competition cars run electric pumps and that it may be a technology we will see in road cars at some point but I don't know what basis the linked website has for claiming that some modern cars have already forgone the mechanical pump.

I don't know why the RAV4 hybrid has one mechanical (engine cooling) and one electric (heater core) pump and not two electric pumps. Perhaps Toyota didn't consider electric pumps reliable enough for such a critical application in a car that's supposed to be reliable.

Not the answer you're looking for? Browse other questions tagged electrical water-pump or ask your own question.

8
Electric water pump control
5
Are there any vehicle engines that don't have a mechanical oil pump?