I have a Toyota RAV4 2003 and the CEL used to come on and off, but now lately it stay on all the time.

I did check the voltage on upstream and downstream O2 sensor and it showed 0.9 to 1.2 volts.

Is there a way to find or identify what could be wrong? Thank you.

TLDR: The sensor is difficult to check because the current change it produces is too small for most clamp meters, so you would have to cut the harness to test it. Not recommended. Try checking for bad connections first. If it's not those, and it's likely not the ECM as you would likely have other symptoms than just this, then try replacing the sensor itself. It is recommended you get a profesional diagnosis before parts swapping as the sensor can be very expensive. (as much as $400 USD).

This is directly from AutoCodes.com

The code is for an air/fuel ratio sensor heater circuit malfunction. The listed possible causes are:

To quote the site:

"Air-Fuel Ratio (A/F)sensor need to reach a minimum operating temperature of 1200 degrees F to produce an accurate voltage signal. The faster the air-fuel ratio sensor reaches that temperature the faster the sensor will start sending an accurate signal to the Engine Control Module (ECM).

The ECM monitors the voltage signal received through the heater element circuit and determines the state of the circuit by comparing the voltage detected with the factory specifications."

This diagram is included to help you identify which bank is at fault: 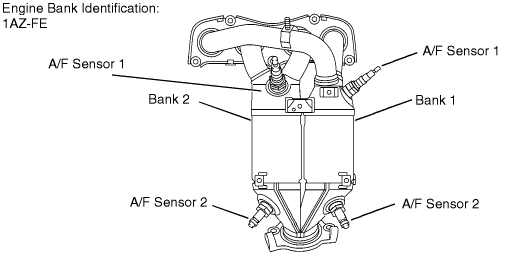 The following is how to test an AFR (Air Fuel Ratio) sensor:

"As the ECM monitors the varying current, a special circuit (also inside the PCM or Power-train Control Module) converts the current into a voltage value and passes it on to the serial data stream as a scanner PID. This is why the best way to test an AFR sensor’s signal is by monitoring the voltage conversion circuitry, which the ECM sends out as an AFR-voltage PID. It is possible to monitor the actual AFR sensor varying current, but the changes are very small (in the low milliamp range) and difficult to monitor. A second drawback to a manual AFR current test is that the signal wire has to be cut or broken to connect the ammeter in series with the pump circuit. Today’s average clamp-on ammeter is not accurate enough at such a small scale. For this reason, the easiest (but not the only) way to test an AFR sensor is with the scanner. By using a scanner to communicate with the ECM, one can view AFR sensor activity. This data is typically displayed as WRAF, A/F, or AFR sensor voltage. However, on some vehicles and scanners it will show up as "lambda" or "equivalence ratio." If the PID displays a voltage reading, it should be equal to the sensor's reference voltage when the air/fuel mixture is ideal. The reference voltage varies from car to car, but is often 3.3 V or 2.6 V. When the fuel mixture becomes richer (on a sudden, quick acceleration), the voltage should decrease. Under lean conditions (such as deceleration) the voltage should increase. If the scanner PID displays a "lambda" or "equivalence ratio," the reading should be 1.0 under stoichiometric conditions. Numbers above 1.0 indicate a lean condition while numbers below 1.0 indicate rich mixtures. The ECM uses the information from the sensors to adjust the amount of fuel being injected into the engine, so corresponding changes in the short-term fuel trim PID(s) should also be seen. Lean mixture readings from the AFR sensor will prompt the ECM to add fuel, which will manifest itself as a positive (or more positive) short-term fuel trim percentage. Some technicians will force the engine to run lean by creating a vacuum leak downstream from the mass airflow sensor, and then watch scanner PIDs for a response. The engine can be forced rich by adding a metered amount of propane to the incoming airflow. In either case, if the sensor does not respond, it likely has a problem. However, these tests do not rule out other circuitry problems or ECM issues. Because an AFR sensor can be relatively expensive (up to $400 U.S dollars), a professional diagnosis is recommended."

This is from here: https://en.wikipedia.org/wiki/AFR_sensor#Testing

The electrical issues about open harness or poor electrical connection can be checked by using an ohmmeter to "buzz out" (check for conductivity) between the two connectors on the harness. Also look for any corrosion on the connectors themselves.

@cdunn has all bases covered, but the intermittency and low voltage tells me that the issue is with the ECU receiving signal from the sensor.

Some basic circuit continuity testing with a multimeter will help you track down the reason for the lack of signal.

Not the answer you're looking for? Browse other questions tagged toyota o2-sensor p1135 or ask your own question.

6
How do I resolve error code P1135 in my Toyota Camry?
5
Oxygen sensor PID for 2004 Toyota Camry 4-cyl
7
Is Torque App reliable to read O2 sensor data?
6
How to Identify which O2 sensor is faulty WITHOUT readings from the car's system
5
02 sensor displays constant 3.3 volts, not a jagged waveform. 2002 rav4
2
Test 3 wire NTK, Bosch O2 sensor signal after heat up, but, not signal. Why?
1
Is LambdaB1S1 the same as Upstream O2?