My 2000 2.0L Golf GLS won't blow hot air at operating temperature, the air is only lukewarm at best. This started a few months ago inexplicably. The car isn't overheating or underheating, it reaches operating temperature in the same amount of time as before. Here's what I've done:

My car doesn't have Climatronic, just the standard climate control system; does that mean it's cable or vacuum controlled? At this point I'm wondering if there isn't simply a fan control gate that's stuck or something. Even though I was able to pass water through it, are there any gates or controls within the heater core itself?

Replacing the heater core is a 8-16 hour DIY job or $850 down at the shop, and I'm not prepared to do either. Short of actually looking at the core, is there anything else I can try, check, or do?

Thanks all, I've been wracking my brain with this one and would love input!

After trying my best not to I decided to replace the core. I used a very helpful VWVortex guide along with a Chilton's manual. 14 hours later I've got air that measures significantly hotter than before, so now it's time to wait and see how things go this winter. I found that I don't have a split HVAC box even though I don't have the Climatronic system (major letdown) and that the flappy bits inside the box were in great shape and moved freely. The old heater core was definitely clogged; simply trying to blow air through it was difficult. For your enjoyment here's what the car looked like when I was finally able to remove the core: 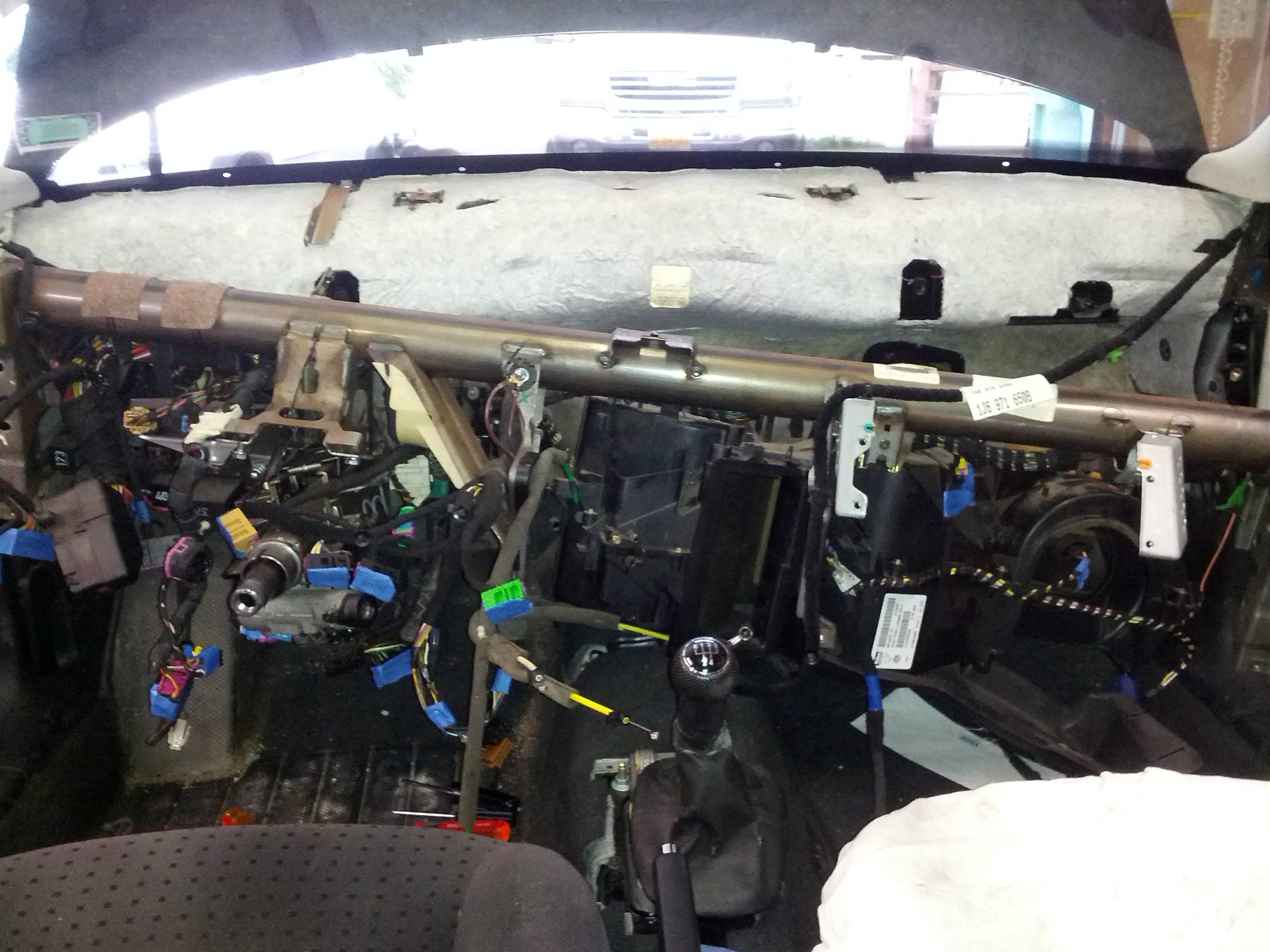 It looks an awful lot like you have diagnosed all of the really hard problems and come up negative. I wonder if you have a simple mechanical problem: is the linkage sound between the hot / cold selector and the flapper valve that forces air past the heater core. From what I hear, the foam around the flapper is also prone to disintegration in humid climates: that would allow all or most of your heated air to escape.

EDIT: I did manage to find a reasonable annotated heater core replacement. I think you're right: this job is a huge pain. And, no, I can't think of a way to get at the internal air direction valves.

Yet another EDIT: Thinking about the diagnosis further, it occurs that you might be able to establish whether you have a bad seal on the flapper valve. This will work best on a very cold day.

Now, even with all of the above, fixing any of these problems will be approximately the same level of hassle. You're going to have to take off the dash, etc. My hope is that, if you do invest the time, you'll know what you're looking for. I'm pretty sure that this isn't a job that you're going to want to do twice.

Had similar issue in Skoda Felicia (which is much like an older Golf) I own. Check these steps:

In such a case that is a broken wall inside salon heater core, so instead of going through the core the coolant was just short-circuited to out. Had to replace the heater core and all went back to normal.

You could check the temperature of the hoses going to and from the heater core from the engine side of the firewall when the vehicle is warm and with the heater on. If both hoses are warm, then you are getting coolant flow through the heater core and your problem is likely inside the vehicle with the air control flaps, possibly the foam seal has come loose and is blocking the warm air flow. If only one hose is warm, then you aren't getting much coolant flow through the heater core and your problem probably lies in the engine compartment. Some vehicles have a vacuum operated valve the turns off the water flow when the heater isn't required, the valve might be stuck, it would be installed in of the heater hoses under the hood.

its the plastic peice the cable connects to. the small peice that screws to the laver breaks the clips and falls out of socket with the temp. flap arm.

If VW are anything like a BMW, there should be a valve that allows for hot coolant to flow through the heater. If this valve fails, you get no flow and the air never heats up. The valves are electric on BMWs, so looks for a valve that has your heater hoses going through it and check for operation.

I removed both left and right hand heater matrix hoses and found hardly any water getting to the matrix, despite new water pump only 1000 miles ago, gets up to temp in 10 mins, doesn't overheat and never gets above 90 on the temp gauge. Just waiting for my hosepipe to defrost to flush and back flush the matrix, good job the seats are heated other wise l would be looking for a brass monkey welder. Still on the plus side it is still doing ridiculous amounts of miles to the gallon, 1.9 pd. I also removed the glovebox to check the operation of all my controls and they are all in gwo. If it wasn't minus 3 l would not be fussed.

Not the answer you're looking for? Browse other questions tagged vw heat coolant golf heater or ask your own question.

3
1997 ford f150 heater not working properly
5
Coolant draining in Subarus
9
Excessive Coolant Expansion: Part 2
8
No heat in my 2008 Pontiac Vibe
1
2004 Pacifica overheats
7
Why does my 2006 Chevy Equinox have no heat when all repairs for the heat has been made?
4
Why is there no air flow thru my heater core?
3
Coolant temperature in truck does not get to operating temp