What is a "crank throw" and how can I determine the number of crank throws on an engine?

This term is confusing me a little and I wanted to make sure I understood it correctly.

Based on my understanding of the Wikipedia article, it looks to me like a crank throw is what allows the piston to translate (or "throw") linear motion to rotation of the crankshaft.

Also, what I infer from this article on firing orders is the number of unique crankpin offsets in a complete cycle will determine the number of crank throws that the engine is characterized by. 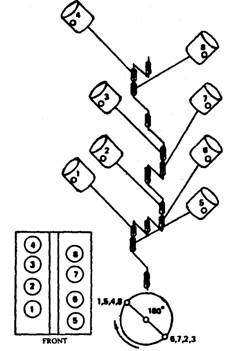 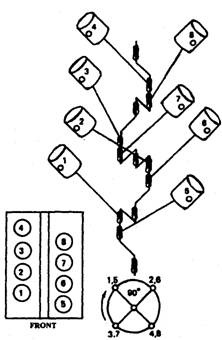 There are two basic usages for the term "crank throw". Both have to do with the crankshaft:

In your examples of either cross-plane or flat-plane crankshafts, both of them have four throws each. 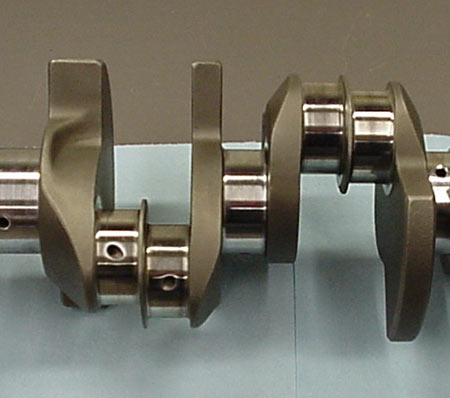 In the image you can see how the journal is split. While being on the same crank arm, the journal (also called a "pin") is split. They will have the same throw (or radius), but are offset from one another slightly.

A synonym to a crank throw is a crank pin. Which is a an offset journal on the crank.

If the offset journal shares a connecting rod with another cylinder you would say the crank-pin has one throw for the two cylinders.

TTBOMK crank throw does not include any measurement of distance.

Here is an image of various crank throw arrangements*

image and citation from the US Navy, Sweet Haven Publishing Systems

Not the answer you're looking for? Browse other questions tagged engine-theory crankshaft or ask your own question.

3
How do the bore and stroke affect the characteristics of an engine?
7
What are crankshaft bearings and how are they different from camshaft end bearings?
14
What made Ferrari choose this particular firing order for their flat-plane V8's?
5
Can running a car with zero oil warp the crank shaft, in turn causing the harmonic balancer to shake off?
2
How to loosen the crank pully bolt with hand tools?
2
How can I tell if water got into my engine crankcase
1
Engine Stand fails and BB falls on end of crank/block: what to check before installing?
2
Why don't timing pins lock the crank and cams precisely?