Now 2nd case, I keep on increasing my throttle with my foot on the clutch pressed halfway. So I have disengaged my clutch half. What will happen in this case? What are the changes I can see in the car/engine? Will load increase? How much? Will the pattern be the same for Speed vs Rpm graph (speed increasing with rpm till a point and then becoming constant)?

P.S. plots to explain concepts are most welcome.

To get us on the same footing, I'm going to assume by saying "clutch pressed halfway" you are suggesting the clutch be halfway engaged (meaning, you are still getting power from the engine, but it's not fully engaged).

What you are talking about is called slipping the clutch. It is a process whereby you can get the engine within the power/torque band without the vehicle itself being at the normal speed for the desired gear. By doing this, you get the benefit of the higher power/torque which allows the vehicle to accelerate quicker without lugging the engine. Once the vehicle has sped up to the point where it would normally be within the power/torque band, then the clutch would be allowed to be entirely engaged so the vehicle can speed up to the point where it should be upshifted to the next higher gear.

When the clutch is fully engaged (no slippage occurring), in any given gear, the engine RPM to vehicle speed ratio will be constant and very predictable. Here is a chart which basically describes how it is for a 5-speed Mitsubishi Mirage (other vehicles will be similar, but different): 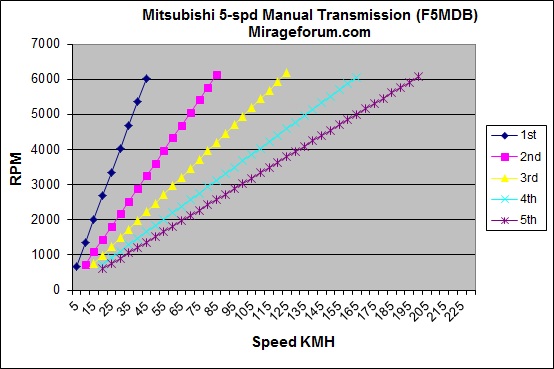 It is of note it is very bad to slip the clutch for an extended period of time. This creates a very large amount of frictional heat buildup within the clutch assembly (friction disk, pressure plate, and flywheel). This has a tendency to cause premature clutch failure and heat cracks within the flywheel. It also puts an enormous amount of stress on the throwout bearing as it is being used continuously while the clutch pedal is depressed to any extent.

Not the answer you're looking for? Browse other questions tagged clutch rpm throttle engine-load or ask your own question.